Funds raised at the premiere will go into a youth homelessness funds to directly help those featured in the film
Aug 16, 2019 1:45 PM By: Erika Engel 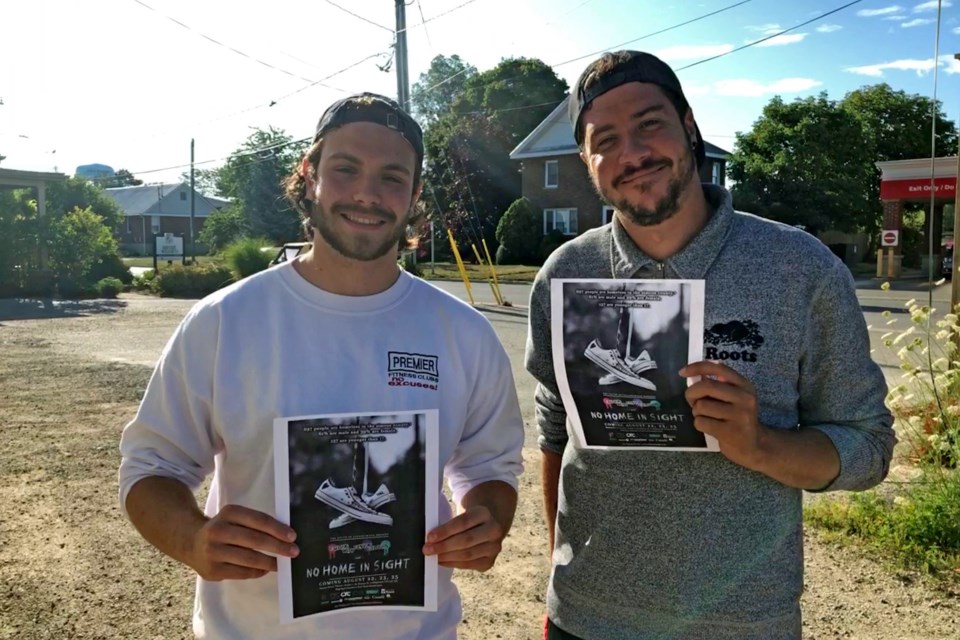 John Cardillo Jr. and Lea Pankhurst hold the posters advertising the premiere of No Home in Sight, a youth-made documentary on youth homelessness in Collingwood. Erika Engel/CollingwoodToday

A new documentary created by a budding Collingwood filmmaker tells the stories of many young people in town from different backgrounds and families all with one thing in common: they’re homeless.

John Cardillo Jr. is fresh out of high school and about to premiere his first feature-length documentary, a project that grew in scale with every interview and, as he said, “blew him away.”

“We spoke to homeless youth, youth workers, politicians … We asked them to tell their story in whatever way they felt comfortable. What is it like being homeless here in Collingwood? What does a good day look like? A bad day?” said Cardillo. “As we did interviews it blew us away. When we thought we knew what the scale was, it grew, and then it would grow again.”

It was the youth centre manager Lea Pankhurst who first approached Cardillo to work on a film about Collingwood’s youth homelessness.

What began as a 15-minute highlight piece turned into a feature-length documentary and a project that will continue into next year as crews follow the lives of Collingwood’s homeless youth.

In his work with the youth centre and in meetings with other organizations in the community, Pankhurst said the issue of youth homelessness continued to come up in every conversation.

“It really kind of struck me how big of an issue it was,” said Pankhurst. “Just because you don’t see people begging on the street, doesn’t mean it doesn’t happen.”

Cardillo said the stories of the homeless youth are varied - some are couch-surfing with friends, some live in tents, some sleep in the library during the day and wander around town at night.

One girl Cardillo’s team interviewed was going into Grade 12. During the interview, she casually mentioned she had slept between some bank doors on a previous night.

“In her mind that was normal,” said Cardillo. “Even after going through everything - all the interviews - I still can’t figure out what that looks like.”

He said many of the youth he talked to don’t have the option of returning home. In some cases, they left abusive situations, or family members with addictions or mental health issues. Cardillo and Pankhurst heard about situations where youth as young as 13 or 14-years-old were homeless or displaced.

In the short-term, Cardillo and Pankhurst said an emergency shelter is necessary. The nearest shelter is in Barrie, and is often full.

Next, there’s a need for more spots in transitional housing.

Home Horizons operates the Barbara Weider House, which is a seven-bed transitional housing facility. Cardillo said the waiting list for a spot in the house is more than 50 people long, and that’s just youth between ages 16 and 24.

Finally, there needs to be more affordable housing for youth and young adults to access.

“It should be a stream, but there are gaps in the system,” said Pankhurst, adding he knows of young adults with jobs who are living in their car because they can’t afford rent in Collingwood.

Eventually, Cardillo hopes to take the film to film festivals, but it will make its premiere in Collingwood on August 22, 23, and 25 at the Simcoe Street Theatre.

Cardillo and Pankhurst are aiming to raise $20,000 through the premiere of the film, called No Home in Sight. All the money from ticket sales, merchandise sales and donations will go toward the goal. The money will be put into a youth homelessness fund at the Collingwood Youth Centre. A portion of the money will go to support the efforts of Collingwood Out of the Cold to establish an emergency homeless shelter this winter.

“When people donate, they’re directly helping the people in the film, and more,” said Cardillo. “Our goal is for every youth we interviewed to be positively impacted.”

Pankhurst said he was “super proud” of the team of youth who worked on No Home in Sight.

He sees the film as something that sheds light on a youth issue, and it’s other youth who are turning on that light.

In addition to all the filming, editing, and production work, local youth have contributed original music that will be used in the film.

“It’s youth telling stories about other youth just to do some good in the community,” said Pankhurst.

For more information and to buy a ticket to the premiere, visit nohomeinsight.com.