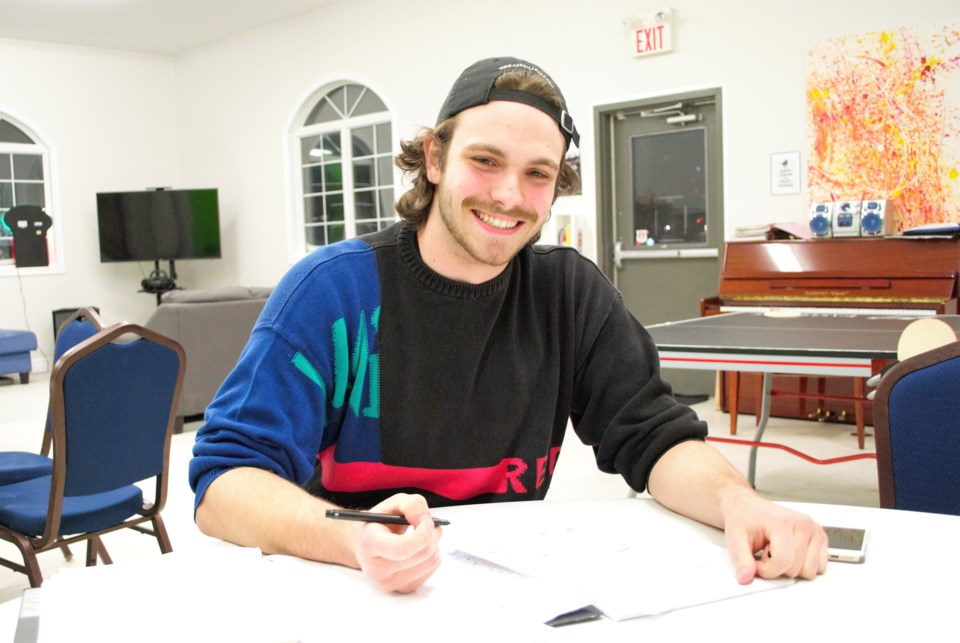 A local student wants to combine his big cinematic dreams with his desire to help others through a few projects he hopes will also help put Collingwood on the map.

For this week’s edition of People of Collingwood we sat down with John Cardillo Jr., 18, a high school student from Collingwood Collegiate Institute (CCI) and leader of the Collingwood Youth Centre’s (CYC) film club.

Q: What is your background? Have you always lived in Collingwood?

A: I moved to Collingwood in the early fall of 2014. I moved here with my mother and younger brother.

It was kind of out of necessity. My parents just got divorced. It wasn’t a great time for any of us, really, and we needed a place to go. Collingwood ended up being that place. It was only supposed to be a temporary, at-most-six-month thing, and that was like four or five years ago now. (laughs)

We kind of fell in love with Collingwood and it’s become my home.

Q: How did you first know you had this passion for filmmaking?

A: I started watching movies when I was really young, but I didn’t watch movies just to watch the movie.

I really fell in love with the ways movies were filmed. So, when I would watch, say, a Star Trek movie or a Star Wars film, I would watch the movie, but I would also watch the interviews with the cast, I’d watch the behind-the-scenes features, I’d re-watch the movie with the director’s commentary on. This was when I was five, six or seven years old.

From a young age, it always fascinated me – the art of filmmaking.

Q: Last year, you made your first feature film. Can you tell me a little bit about that?

A: I led the production with my co-creator Zane Frantsen... titled Senior Year. It was an amazing experience. (EDITOR’S NOTE: To read our story on the film when it premiered, click here)

We weren’t really expecting to do one, but it just so happened that the CCI musical was cancelled. So we decided to take it.

I was the lead writer on the film, and we co-directed it.

We involved over 125 high school students from the area.

The film not only helped me figure out that this was really a passion of mine, but it helped a lot of other people figure that out too.

We donated all the profits to My Friend’s House here in Collingwood. There was better reception to the movie than I ever thought (possible). Everyone was so positive.

It was a really special time. Although it was stressful, it was amazing and one of the best experiences of my life.

Q: Why was My Friend’s House specifically chosen as the cause to support?

A: I’ve had a relationship with My Friend’s House since the fall of 2016. My mom, my brother and I, we came from a background of domestic violence in our home. It was something that hit close to home, but it wasn’t really something I was open about talking about.

In 2016, I wrote a speech about the effects of domestic abuse on a child. I wrote it for me, mainly.

Also, our school made us write speeches every year, and I decided I was going to write one that no one was going to forget.

It was a powerful speech. It didn’t only help me with the stuff I was dealing with, but as I presented it, it helped other people. They reacted to it. It made them open up to me about experiences in their own lives.

I had the privilege of speaking across Ontario in the Royal Canadian Legion speech competition. I spoke on the Penny Skelton Show. I spoke at summer camps, schools and charity events. I kind of went everywhere.

My Friend’s House really helped me out with that. They were an amazing group that had given me the platform to speak. When it came time to film, we didn’t have any interest in taking the money back for ourselves. (We thought) the film could be even more impactful if... we donated the proceeds to a charitable organization that’s helping people.

It’s personal to me.

Q: There are two major projects you have on the go right now with the CYC film club: a documentary about youth homelessness in Collingwood and another feature film. Can you tell me about those?

A: The documentary will be about 30 to 40 minutes long.

We are telling the story of four homeless youth in Collingwood. They’re not in their late 30s having gambled all their money away. They’re kids who have been forced to be homeless. They don’t have a place to go.

We’re going to put a camera in front of them and let them tell you their story so the audience has an idea of the magnitude of the situation. These people are victims of a real problem that affects kids all over the country.

We plan to set up a GoFundMe page so people who watch the documentary can donate directly to supporting the end of youth homelessness in Collingwood to help set up more emergency housing and care packages.

We’re doing the next feature-length film again with the youth of Collingwood, partnered with the CYC and the Environment Network.

The film is called Failing with Flying Colours.

We hope to bring it from the page to the screen sometime in mid to late July. The film follows three friends who are about to graduate high school and are kind of drifting apart. One is focused on university, one is struggling with problems at home and one is focused on these two friends who are going off in separate directions.

It’s a really awesome project that we’re starting to launch within the next week or so. We want to get as much attention and interest on it as possible. We’re hoping to hold auditions (soon) that are open to everyone, both youth and adults.

We want to make a community movie that not only focuses on this story, but also... on Collingwood.

That’s really special and really important to us. We want to make something that feels real and grounded in real life.

The film will touch on what it means to grow up and change. I don’t want to give too much away.

We’re looking to donate half the proceeds again to My Friend’s House and the other half to our campaign to end youth homelessness in the area.

Come watch it and give to a good cause.

Q: What are your future plans in your own life?

A: It changes by the week. Currently, I am on-route to film school. Hopefully in the U.S. or here in Canada. I guess you could say that’s where my next leap is going.

But my next steps are that I’m focused on making an impact here in Collingwood through the work at the youth centre.

Once those (projects) are done, hopefully I’ll have a month to breathe before getting into life at university.

In a week from now, I might be taking a year off. A week from that, maybe I’ll be going off to study screenwriting. Who knows? It changes by the week.