2019 in Review: Business, weather, and shipbuilding history were popular this year 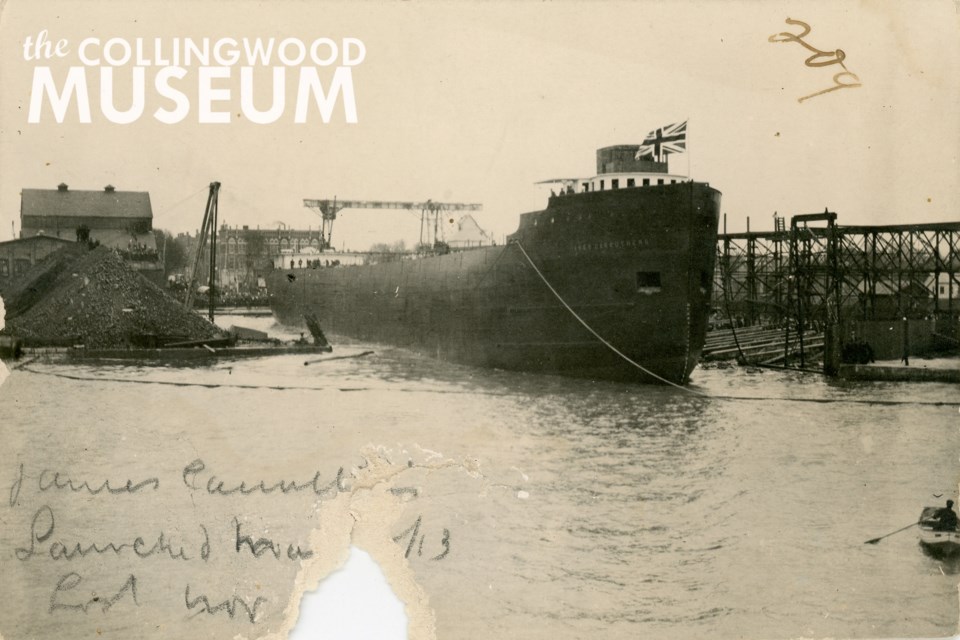 This photo shows the launch of the James Carruthers, the largest bulk freighter on the Great Lakes in 1913, after it was built in Collingwood. Photo from Huron Institute 209; Collingwood Museum Collection X974.544.1

In a weekly series called Remember This, Collingwood Museum provides a glimpse into bits and pieces of that history with photographs to accompany the stories. Some are mysteries, and some come with well-documented and preserved records.

This year, readers seemed captivated most by the historic tales of weather disasters and downtown’s business landscape. And, of course, the ever-popular stories of Collingwood’s shipbuilding history.

These are the five most-read Remember This features posted on CollingwoodToday.ca in 2019.

Perhaps it’s the year’s high water levels that made this story standout for readers, or maybe it was the dramatic, sepia-toned photographs of Collingwood streets underwater and 1940s cars leaving wakes in the flooded streets.

This story and photos from the Collingwood Museum for a March 17, 2019 Remember This feature was about a St. Patrick’s Day flood in 1942 that left the gates of the Collingwood Shipyards sitting in several inches of water. The three photos show Huron, Raglan, and Hume Streets looking more like rivers than roads.

Collingwood’s Shipyards remain a source of nostalgia and interest not just for residents but for visitors. This story and photo submitted by the Collingwood Museum for Remember This, featured a vessel that stood out for its size.

Remembering a lost hotel that once stood on Hurontario Street

The Grand Central Hotel featured in Remember This on June 9, 2019. The hotel opened in 1876, and part of the building remains today as retail space housing the store Coriander.

It was reported in a local newspaper in 1895 that the owner of the hotel, Thomas Collins, was aiming to have the most modern hotel in Northern Ontario. The hotel boasted a fully-equipped bathroom, and a wrought iron range - the largest in town - in the kitchen.

Much of the building was torn down in April 1918 to make room for the Merchant’s Bank of Canada, which later became the Bank of Montreal and is now Prime Seven Nine.

Residents turn out in fine clothes for 1911 parade

The day was August 14, 1911, and Collingwood’s residents put on their best clothes for the Civic Holiday Parade. Not only did this edition of Remember This show readers a bit about the style in Collingwood in 1911, it offered a view of Hurontario Street’s west side between First and Second Streets.

White’s Hardware, a two-storey building still standing today, stands out in the photo, while the absence of the federal building (not built until 1914) is also noticeable.

This box store on First Street existed long before Wal-Mart

The Long Brothers building opened on April 6, 1914 on First Street and was known as a one-stop shop.

The featured photographs in the Remember This feature published on April 29, 2019, give a glimpse of the former buildings that stood at 1 First Street, now the location of the Admiral Building (including the LCBO).

The Long brothers owned businesses in Collingwood starting in the 1850s, and the three-storey brick building on First Street was home to the T. long and Bro. warehouse, later a National Grocers Co. Limited. The photo also shows a smaller structure used by Smart Bros. Limited, that housed a local cannery, which became one of Collingwood’s largest employers during its operation between 1892 and 1964. There’s a great photo from 1948 of the cannery with five delivery drivers and their trucks parked and posed in front of the cannery.

Let there be light: all about the advent of hydroelectric energy in Collingwood
Oct 13, 2019 1:00 PM

This is the only known photograph of a downtown building long gone
Jul 14, 2019 1:00 PM
Comments