Collingwood residents turn out in fine clothes for 1911 parade

Remember This: the Civic Holiday Parade travelled through town and drew finely-dressed spectators
Jun 23, 2019 9:00 AM By: Remember This? 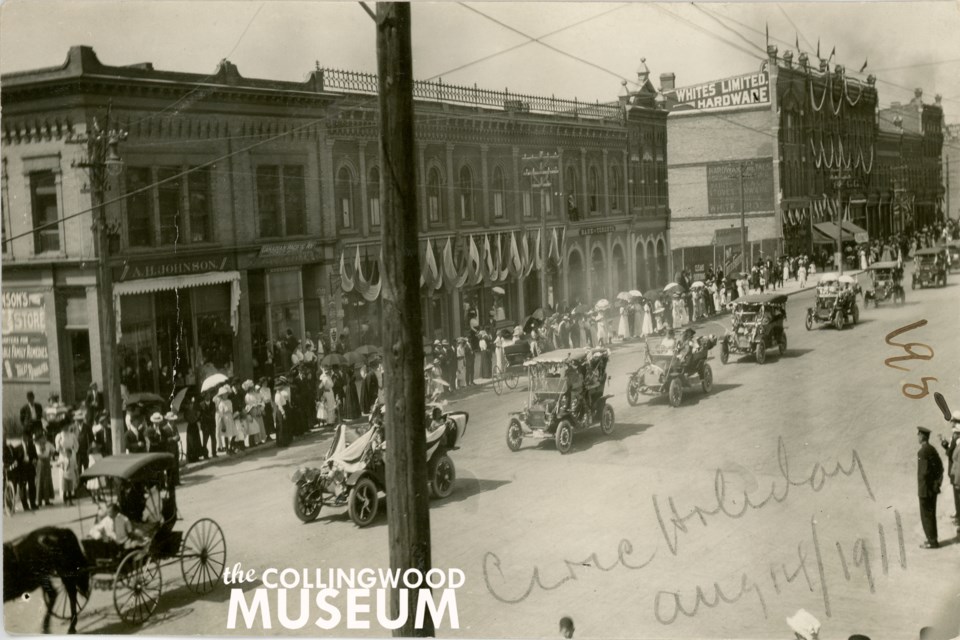 Today’s featured photograph showcases a procession of early automobiles, led by a horse and buggy, along Hurontario Street between First and Second Streets for Collingwood’s Civic Parade on August 14, 1911. A line of well-dressed spectators appears along the sidewalk on the street’s west side.

The unbroken line of buildings, beginning at the photograph’s left side and ending just before the painted sign for White’s Hardware, is of particular interest as these two-storey buildings continue to stand into the present day.

A striking difference between the historic streetscape of 1911 and the present day is the absence of the Federal Building at 44 Hurontario Street. Just three years later, in 1914, the cornerstone for this iconic building would be laid between the Enterprise Printing Office and White’s Hardware.

A noticeable presence in the 1911 photograph is the decorative parapets that line the tops of the buildings. Today, these are noticeably absent, particularly the beautiful brick feature above 98 Super Panda.

Collingwood’s historic downtown is recognized on Canada’s Historic Places for its characteristic and well-preserved architecture, primarily the brick buildings erected along Hurontario Street between 1880 and 1920.

If you have a story to share about today’s featured photograph, please contact museum staff at mshaw@collingwood.ca.

Remembering children parading to the Great North Exhibition
Jun 16, 2019 11:00 AM