Today's photo is a remarkably clear image captured during one of Collingwood's signature side launches
Feb 9, 2020 1:00 PM By: Remember This? 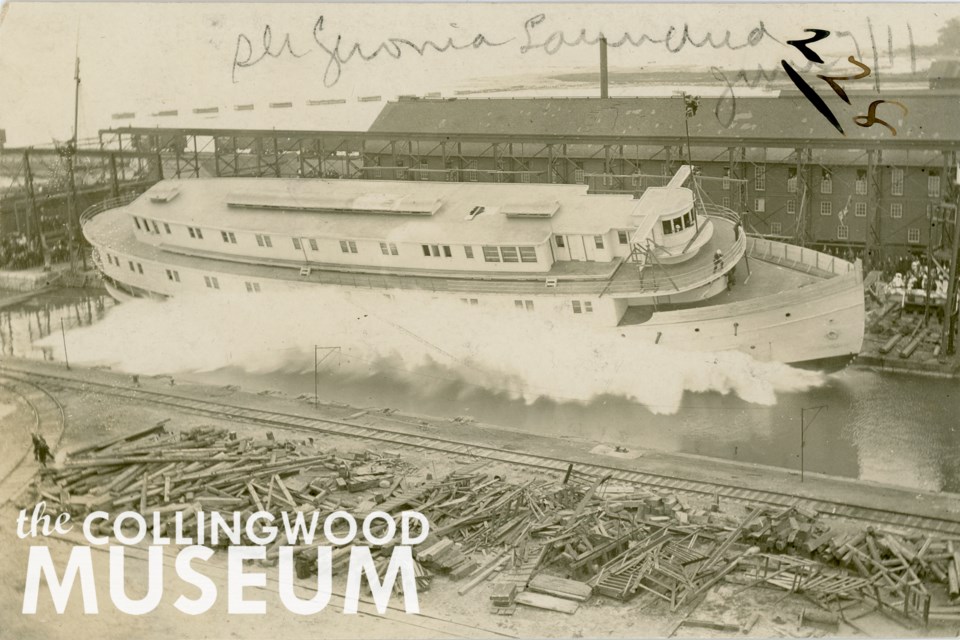 A side launch at Collingwood's shipyards always drew a crowd of both locals and visitors. People would line the dry docks for the big event.

Today's photograph supplied by the museum captures the action of one such event in 1911 when a ship built in Collingwood endured the precarious tilt and violent rocking motions of a side launch, and all under the excited eyes of a crowd that gathered at the dry dock.

The clarity of today’s featured photograph is quite astounding considering it was taken over a century ago. When looking closely, several details pop out about the day’s side launch event, including those lucky onlookers who have been preserved for posterity by the unknown photographer.

On June 7, 1911, Geronia, the fourth passenger vessel built by the Collingwood Shipbuilding Co. Ltd., plunged into the flooded No. 1 Dry Dock at the northern-most point of St. Paul Street. The tip of today’s Sunset Point is just visible in the top, right corner.

Some women are particularly visible on the right side of the Geronia’s bow due to their light-coloured attire. Meanwhile, a few heads, presumably those of workers, are seen peeking through the windows of the building that runs the length of the launching ship.

Perhaps most interestingly, two men are seen gripping the front railing on the vessel’s upper deck in the age-old tradition of “riding her in." The thrill and fear that accompanied the privilege of being aboard a launching ship is still talked about by former shipyard workers who were lucky enough to have experienced the physical force of the launch event.

On the photograph’s lower left side, two men appear to be running across the curved railway track in an attempt to escape the oncoming wave. As the size of ships constructed in Collingwood grew larger, so too did the ensuing waves created by the side launch. It’s not uncommon to hear Collingwood residents say that visitors were easily identified during a launch as they typically stood too close to the water, not realizing they were in the wave’s path.

Geronia was constructed for the Ontario and Quebec Navigation Co., Ltd. In 1913 she joined Canada Steamship Lines. Upon joining CSL’s fleet, she was renamed Syracuse and later Cape Trinity. At the end of the 1928 season, she was retired and was scrapped in North Tonawanda, NY, in 1937.

If you have any information to share about today’s featured photograph, please contact Museum Supervisor Melissa Shaw at mshaw@collingwood.ca.