The museum has a collection of ledgers kept to record the operations at Collingwood Shipyards' dry docks, but there are some gaps in the records
Jan 26, 2020 1:00 PM By: Remember This? 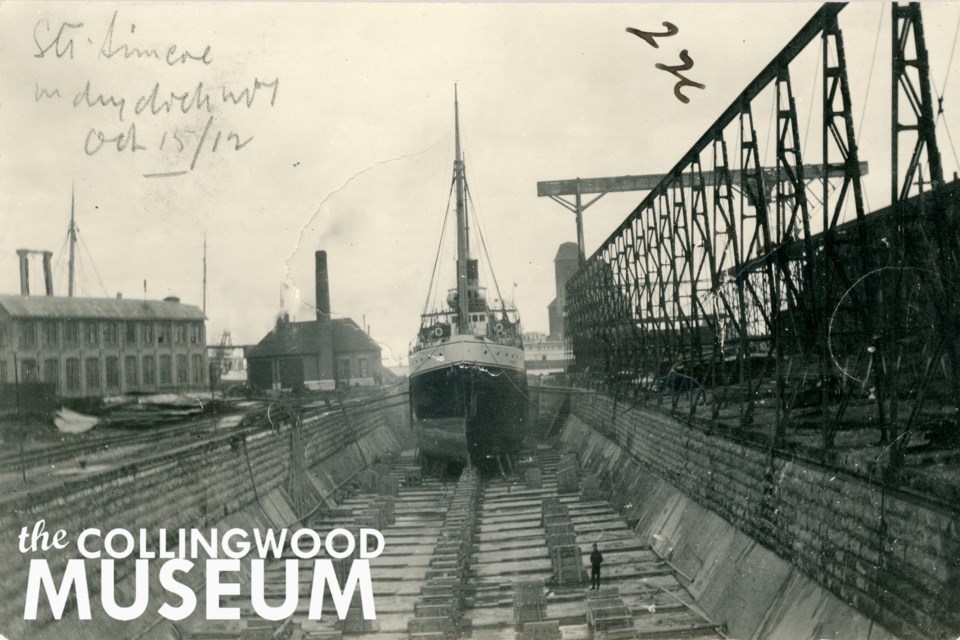 Collingwood's original dry dock in operation in 1912 with its stone cribbing visible along the east and west walls. The steamer Simcoe is in the dry dock awaiting repairs. Photo provided by Collingwood Museum Huron Institute 226; Collingwood Museum Collection X974.704.1
The Collingwood Shipyards once boasted two operating dry docks at the northern-most points of St. Paul and Hurontario Streets. These rectangular sites continue to exist into the present day as permanently flooded inlets along Collingwood’s waterfront.

A dry dock is a narrow basin that can be flooded to allow a ship (or load) to be floated in, then drained to allow that ship to come to rest on a dry platform where crews can perform construction, maintenance, and repair on the ship.

In today's photograph, the steamer Simcoe is shown sitting on keel blocks awaiting repairs on October 15. Unfortunately, little is known about the work underway.

The operations of Collingwood’s dry docks were recorded by shipyard staff in bound ledgers or dry dock diaries. Museum staff searched the diaries to learn more about Simcoe’s time in Collingwood; however, the ship’s arrival predates available onsite records.

No. 1 Dry Dock was officially opened on May 24, 1883, as part of Collingwood’s Victoria Day celebrations. For this reason, it was originally named the Queen’s Dry Dock.

Collingwood’s second dry dock, No. 2 Dry Dock, was constructed at the northern-most point of Hurontario Street in 1909 and is believed to have operated into the 1950s. Following its tenure as a dry dock, the rectangular basin remained in a permanently flooded state and was strictly used as a launching basin for newly-built ships at the Collingwood Shipyards.

If you have any information to share about today’s featured photograph or the possible existence of additional dry dock diaries, Collingwood Museum staff may be reached at mshaw@collingwood.ca.

Waiting out the winter in a harbour brought an end to this Collingwood-built ship
Dec 22, 2019 1:00 PM
Comments