Did you earn one of these ribbons at a Shipyard Picnic?

Remember This? Fifty years ago, an epic battle was won at Sunset Point Park - to the victors a Hudson Bay prize blanket
Sep 1, 2019 8:30 AM By: Erika Engel 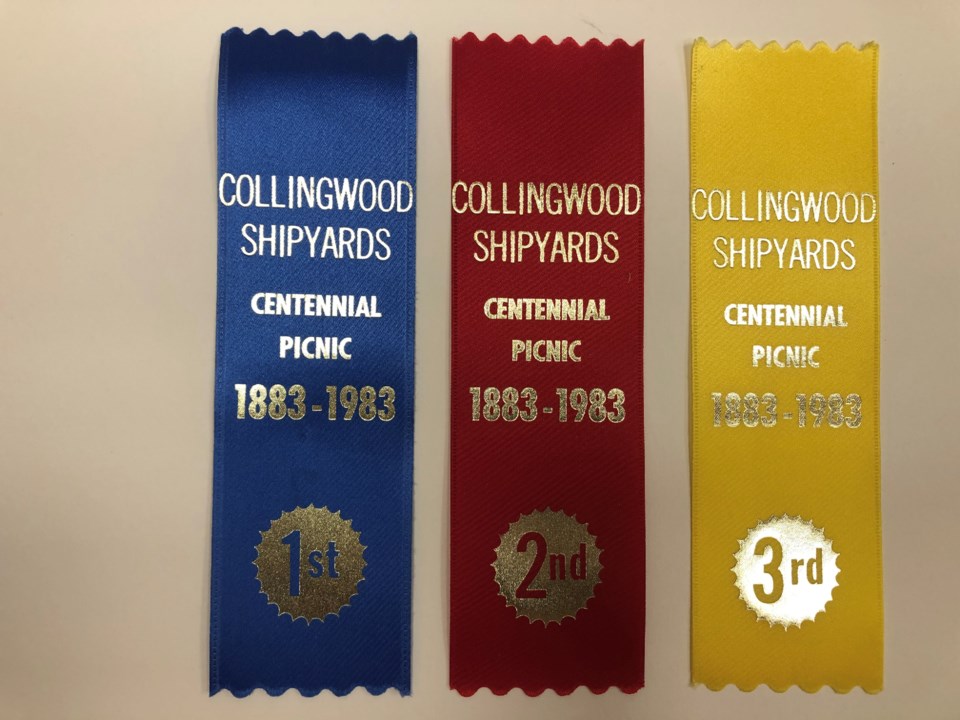 At about this time of year, 50 years ago, the community gathered at Sunset Point Park for a serious event: Tug o’ War.

The gathering was the annual Shipyard Picnic, sponsored by the Local 6320 United Steelworkers of America. According to the archives of the Collingwood Enterprise Bulletin, there were 600 “parents and children” at the annual picnic on Aug. 23, 1969.

This week for Remember This, we’re straying from the Huron Institute archives to bring you an account of the annual picnic.

According to the news report, the 1969 event was hosted by Master of Ceremonies Lorne Hutchinson, union president at the time, and he started the events at 1:30 p.m.

A. W. Webster was the general manager of Collingwood Shipyard at the time, and handed out Hudson Bay prize blankets to the Tug o’ War winners and runners up. His wife, “Mrs. Webster” received a bouquet of red roses.

There was bingo for the ladies, and a “Horse Shoe Pitching contest” for the men.

H. Bell provided hay rides, and the ice cream booth was, reportedly, one of the busiest spots that afternoon.

According to the report, H. Cox was the oldest working employee at the picnic, and J. Rowe was the oldest retired employee. Finally, the article also mentions the “largest family present” and the award went to Mr. and Mrs. Paul Caron and their 11 children.

Collingwood museum has some annual picnic ribbons in its collection and provided this photo of them.

Do you have any memories from the annual Shipyards Picnic? If so, let us know by emailing erika@collingwoodtoday.ca or email Melissa Shaw at the Collingwood Museum at mshaw@collingwood.ca.

'Pioneer buildings' lined First Street in early 1900s
Mar 8, 2020 11:00 AM
Comments
We welcome your feedback and encourage you to share your thoughts. We ask that you be respectful of others and their points of view, refrain from personal attacks and stay on topic. To learn about our commenting policies and how we moderate, please read our Community Guidelines.