Full body spray down, and other COVID-19 protocols in Honduras

Simcoe County resident Karen Spring returned to her home and husband in Honduras and delivers this first-hand experience of the country's various pandemic rules
Oct 17, 2020 5:30 PM By: CollingwoodToday Staff 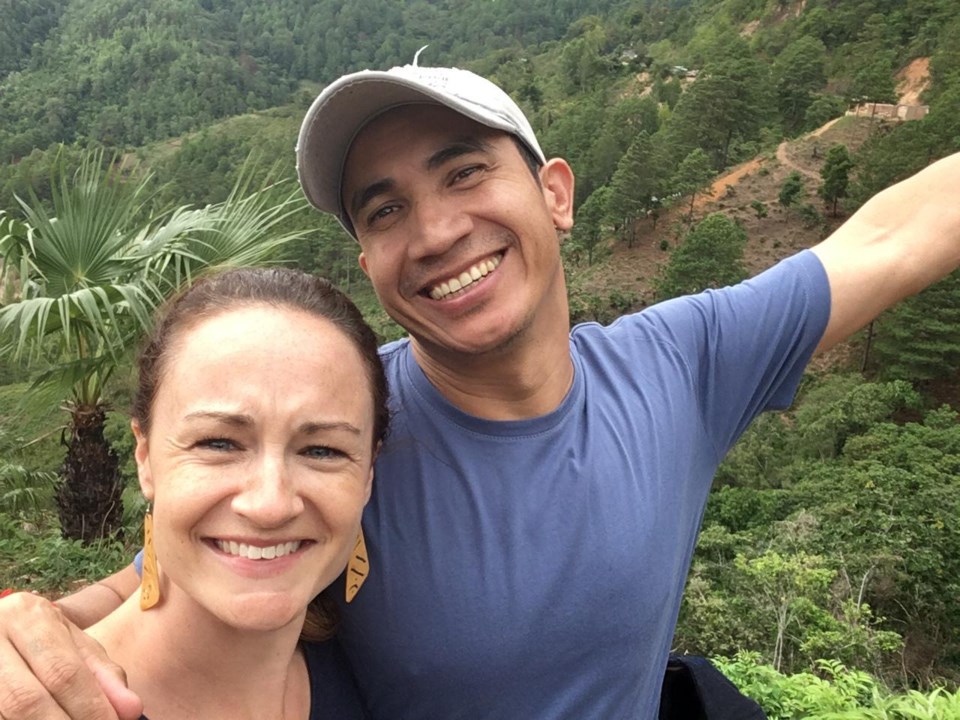 The following account was written by Karen Spring, whose family lives in Elmvale, Ontario. Spring now lives in Honduras with her husband Edwin Espinal. We've written about Espinal's arrest and imprisonment here. Both are fighting for human rights in Honduras, and both have been helping with a food delivery program established in the city during the pandemic to help those whose income was cut off by pandemic restrictions. This is Spring's account of Honduran COVID-19 protocols and an update from those running the food program.

It has been almost two months since I left Elmvale, Ontario and travelled to Tegucigalpa. Since then I have been reporting on the political situation and the COVID-19 crisis in my new podcast Honduras Now. Today I would like to update you on the pandemic and explain a few bizarre COVID-19 prevention methods that are in place when entering neighbourhoods and going into stores.

To date, the number of COVID cases has reached 84,000 and there have been 2,512 reported deaths. However, Hondurans still do not believe these numbers represent the true situation as testing is not readily available; many sick Hondurans cannot either reach a hospital or pay for care. So, many deaths occur at home and go unreported. In addition, Hondurans do not trust government authorities here to provide the real data related to the pandemic.

But I want to share some of my own experiences living here during COVID-19. The whole idea of an entranceway COVID-19 prevention in Honduras has been kind of bizarre to me.

In smaller towns, like the town Edwin and I visited last week outside of the capital city, town officials have even set up large, disinfectant drive-throughs. They have contraptions at the entrance of the town, so when you drive through, your entire car is sprayed with what I think is disinfectant by the sprayers that line the entire area of the contraption that they have set up.

This has been totally bizarre to me. I don’t fully understand it. I don’t even know what is in these in terms of what kind of disinfectant they are using. But it seems to be something that everyone has decided that is effective against COVID-19.

I think the weirdest entranceway prevention measure that I’ve seen so far, was when Edwin and I went the other day to a store that sells lights, fans, and other electronic home supplies. At the entrance of this store, a guard took my temperature, which is a usual occurrence here when entering a public building. Then he asked me to raise my arms. I did what he said. And then he literally sprayed my entire body up to my neck with some sort of liquid that he had in a sprayer contraption. I assume what he was spraying was disinfectant. And then he asked me to turn around and he did the same up and down my back.

So, I literally walked into the store, wet with this disinfectant on my clothes and I was kind of shocked by the whole thing. I thought it was so odd, but I didn’t protest because I wasn’t really sure what it would achieve if I did. But there you have it. Those are some stories about COVID-19 entranceway prevention bizarreness in Honduras.

Since my return in August, more corruption cases have been reported and exposed related to government mismanagement of international aid that was sent to Honduras, specifically to fight the pandemic. For example, the Honduran government allegedly spent $48 million to purchase mobile triage units from a company in Turkey to set up outside of the hospitals to treat people. Yet to date, only two have arrived but have not been completely erected, even though the COVID cases have been steadily rising since March. With a lack of hospital space and supplies to treat the severe cases, Hondurans complain that this money was spent unwisely.

To protest, people continue to write slogans on walls, billboards, and on the pavement in busy thoroughfares that read, “WHERE IS THE MONEY?” Still, no government officials have been arrested for mismanagement of international funds. So, women leaders in the communities continue to provide food programs where the health situation, the loss of jobs, business closures, and the resulting extreme hunger, have caused severe hardships for the people.

Raquel Lopez is a community organizer. With other women in her community of Alemania, north of El Progreso, they began a food program to feed the children and elderly. In this small rural town, the women mostly work in the nearby Canadian and US sweatshops. When the pandemic hit their area, many women contracted COVID while working in the factory and lost their jobs. That is when the women’s committee began feeding the hungry, particularly the children and elderly of the most vulnerable families.

A local women’s group in El Progreso heard about what the rural Alemania neighbourhood was doing, so they got in touch and through the solidarity networks that exist, contacted Canadian based organizations to help fund the project. The Simcoe County Honduras Rights Monitor (SCHRM) and Rights Action (Toronto) began sending money to this food program and to others in poor neighbourhoods in El Progreso, Tegucigalpa and small communities around Honduras.

I asked Raquel to describe the program, how it got started and how it works:

Raquel: We located a small piece of land; we found a place under a tree, and we got a few pieces of stripped metal and made a little roof. We began to build the artisanal cooking pits, because we don’t have stoves. We made the cooking pits out of dirt, and the kids and men brought the firewood. Then we started to cook.

We thought it was important to do this because we have 60 to 70 hungry children that come regularly to the kitchen to eat their breakfast and lunch. We will continue to offer this program as long as we’re able to get food donations. But thank goodness we are able to continue and since March, we haven’t stopped providing these two important meals. Thank you so much to the organizations that support our community. The children of Alemania also say ‘thank you.’ This project won’t be ending anytime soon because there’s still a lot of need.

In the beginning, kids would come and eat here but when the virus started to spread more, we asked them to come but take the food to their houses so that they don’t stay here in the kitchen while they eat. Our Alemania food project has been going strong now on a daily basis for five or six months so we must make provisions to ensure the children’s safety and to keep the program running even as the pandemic continues.

Karen: In late September, a local radio station in El Progreso aired the story about SCHRM and Rights Action’s donations and how this support is benefitting the needy. Here is their editorial:

Radio Progreso: “At 5 a.m. in the morning, Raquel, together with a group of women from the Alemania neighbourhood in the city of El Progreso in the department of Yoro, start their day. The wood stove is lit, and they inspect what is leftover from the food donations.

Then they divide up the work; they mix the cornmeal, boil the beans, strain the coffee, fry the eggs, and if they have some, prepare milk for the boys and girls. Each day, this is how it is in the community kitchen. Just in El Progreso alone, there are at least 5 community kitchens, all formed and directed by women.

The economic crisis exacerbated by the pandemic has left many families without employment, without income, and without the possibility of eating three times a day. The generosity of these women is made possible through the growing number of bread, tortillas and other foodstuffs.

This is a strategic way of ensuring food for boys, girls, and the elderly and promoting the value of solidarity. These food kitchens have been possible during the pandemic thanks to the generosity of people and organizations that recognize the needs that many poor families are confronting. The solidarity and efforts of women are the most beautiful expressions during this time. We must join in designing a regrowth from within our communities, to reconstruct a socially-focused state that isn’t authoritarian and that isn’t corrupt.”

Karen: After this aired, another migrant caravan with 1,000s of Hondurans gathered at the northern San Pedro Sula bus terminal and left on foot on September 30 to head northward to the US border. While the US Presidential debate was live on television, this caravan began. Think about how bad your situation would have to be in order to leave everything behind to attempt this dangerous trip through Honduras, Guatemala and Mexico and then have to deal with all of the outrageous violations happening at the US border.

Thank you for your continued support for Hondurans. If you wish to donate to the food programs, contact us at: 705-734-4238 or email: janetspring7@gmail.com. Take care and hasta pronto!