Appeal could send Edwin Espinal back to 'inhumane' prison

His family in Honduras and Simcoe County worry he won't get a just ruling and he'll go back to La Tolva prison
Sep 7, 2019 1:30 PM By: Erika Engel 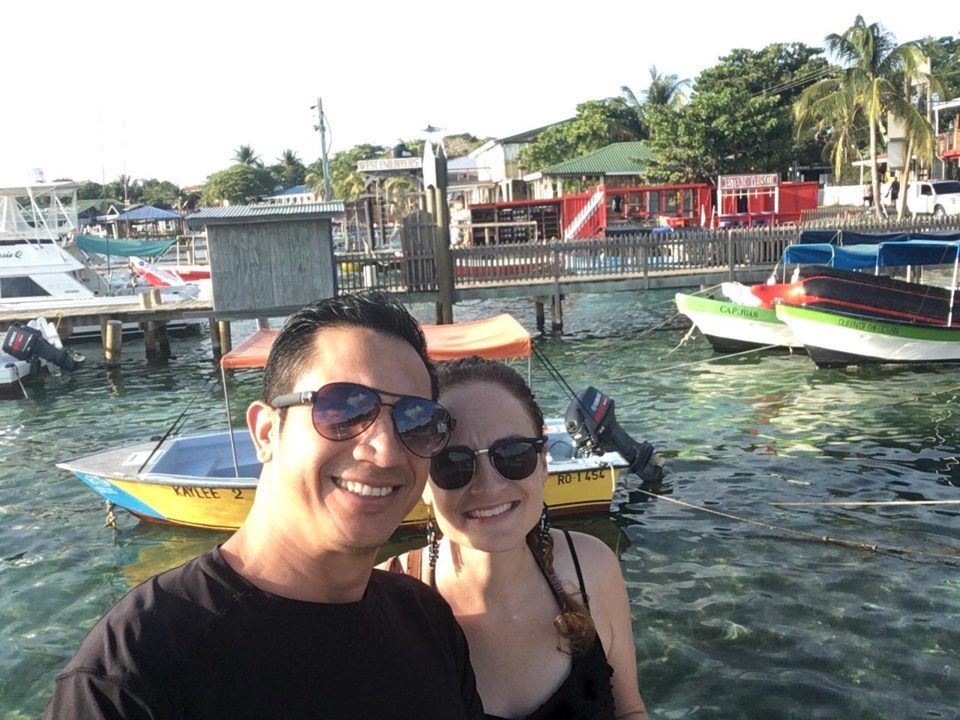 Edwin Espinal and Karen Spring spent a few days on vacation when they heard a prosecutor was arguing he should be sent back to prison for pre-trial detention. Contributed photo

The joy Edwin Espinal and his Simcoe County family felt when he received a conditional release after 19 months imprisonment without a trial was short-lived when news from their lawyer indicated Espinal could be sent back to prison.

“We found out last Friday,” said Karen Spring, Espinal’s wife, on a call with CollingwoodToday from Honduras. “We were on vacation, trying to take a break from everything.”

Espinal and Spring were spending six days in the northern part of Honduras for their vacation. Espinal is required to check-in with a court judge once a week as part of the conditions of his release from prison.

Espinal, a citizen of Honduras, married Karen Spring, a Canadian citizen raised in Elmvale, from prison on Oct. 18, 2018. The two had been partners for years. Karen met Espinal while she worked in Honduras for a human rights organization.

Espinal faces charges of property damage, and his lawyers argue his charges and imprisonment is related to his participation in protests opposing president Juan Orlando Hernández’ rule and regime in Honduras.

Espinal was held in pre-trial detention at maximum-security La Tolva prison where - among other inhumane conditions documented by Amnesty International - he sometimes went days without access to water, and what water was provided was severely limited and unsanitary.

He received a conditional release on Aug. 9. Since then he has frequently been to the courthouse to check-in once a week and to get updates on the status of his trial, set for spring of 2020.

Now the prosecutor in Espinal’s case is arguing he should not have been released, suggesting that since other courts upheld his pre-trial detention at La Tolva, the judge who granted him the release should have done the same.

“The judge said the decision to send [Espinal and Raul Alvarez] to prison was made arbitrarily,” said Spring of Espinal’s release hearing. “He said there was no justification to send them to prison.”

Alvarez was arrested around the same time as Espinal on similar charges. Both are being referred to as political prisoners.

Spring said just a couple days ago there were seven more people arrested while protesting to call for protections to a local water supply. They were all sent to La Tolva.

“[The Hernández government] is very aggressive toward anybody who is the slightest bit vocal against them,” said Spring. “Legally, they have no reason to justify pre-trial detention. They can’t show [Espinal and Alvarez] are obstructing the investigation and they can’t show they’re going to flee.”

The prosecutor is arguing the two will “re-join” criminal organizations. Spring said Espinal is not part of any criminal organization, he only participated in protests - something much of the country is doing in Honduras as the police-military continues to react violently to protesting and allegations of corruption and criminal activity against not only the president Hernández but much of his family come from prosecutors in New York.

Spring said the common phrase among Hondurans right now is “the dictator is increasingly being cornered.”

“When you’re backing somebody into a corner, they get extremely aggressive and violent, and scared,” said Spring. “They start taking it out on their enemies. The situation for Honduran people, especially those who are protesting will keep getting worse.”

The trial of Hernández’ brother begins in the U.S. in October.

“People think that month is going to be a really difficult month for Hondurans,” said Spring. “That’s when a lot of information is going to come out.”

She said there’s uncertainty around how Hernández will be affected, whether the U.S. will indict a sitting president.

Hernández is being referred to as “co-conspirator four” in court documents related to the case against his brother Juan Antonio Hernández, who is described as a “violent, multi-ton drug trafficker.” He has pled not guilty to drug and weapons charges. President Hernández also denies the allegations.

“We are very worried because the appeals court is a court that is known around the country to be controlled by the president,” said Spring. “He has strategically placed magistrates in that court that are part of the mafia structure.”

She said one such magistrate is the wife of the vice-president of congress. Her husband is a high-ranking official in the national party and a good friend of President Hernández.

This appeals court has already made rulings in Espinal and Alvarez’ case, and always sides with the prosecutor.

Spring said they continue to watch closely for the written report containing the appeal decision.

In the meantime, Spring said Espinal has been spending his time “catching up with life he’s missed in the last 19 months.”

He has not been attending any protests out of concern for his security.

He’s receiving medical attention for tinnitus in his ear caused by an untreated ear infection in prison that caused him to lose some of his hearing.

And he’s also been reading a lot of news.

“He’s always been a news junkie,” said Spring. “He just wants to sit and read the news and catch up.”

Espinal has been arrested and tortured before. His past girlfriend was killed by tear gas during a protest years ago. In La Tolva he received death threats from the inmates. Guards turned away visitors from his wife and mother-in-law to human rights workers. He was put in solitary confinement for two weeks with no explanation.

Spring has been working in Honduras for human rights for several years. Her life, too, has been in danger.

For 19 months she and her family - particularly her mother Janet Spring - fought for justice for Espinal and the other political prisoners. Members of her home community of Elmvale and the broader Simcoe County formed a group to fight for the release of political prisoners in Honduras. Spring said it felt like she was fighting a war. But she and Espinal are committed to keep fighting.

“There’s indignation over how extreme the injustice is,” she said. “When you are already committed to making change and being involved with organizations that want the same, it makes you feisty. And it makes you even more committed to seeing it through.”

She said there is a saying among the Honduras rights organizations she works with - the truth always comes out. It’s just a matter of time.

Spring will be in Canada later this month and will appear at an event in Toronto hosted by the Simcoe County Honduras Rights Monitor. The panel discussion, which takes place in the riding of Chrystia Freeland, Canada’s foreign affairs minister, will include talks by Karen Spring, Yves Engler (Montreal-based author and activist), Tyler Shipley (author of Ottawa and Empire) and Yurissa Varela (Honduro-Canada Solidarity Community member). The event takes place Sept. 18 from 7 p.m. to 9 p.m. at St. Stephens-in-the-Fields Church at 365 College Street.

As son-in-law worried for his life in Honduras jail, a local family fought for justice
Aug 20, 2019 1:30 PM
Comments
We welcome your feedback and encourage you to share your thoughts. We ask that you be respectful of others and their points of view, refrain from personal attacks and stay on topic. To learn about our commenting policies and how we moderate, please read our Community Guidelines.