The country was in turmoil before COVID hit, now it's 'desperate and senseless,' but a Honduran with family ties in Simcoe County is one of several risking freedom to feed families
Aug 9, 2020 1:00 PM By: Erika Engel 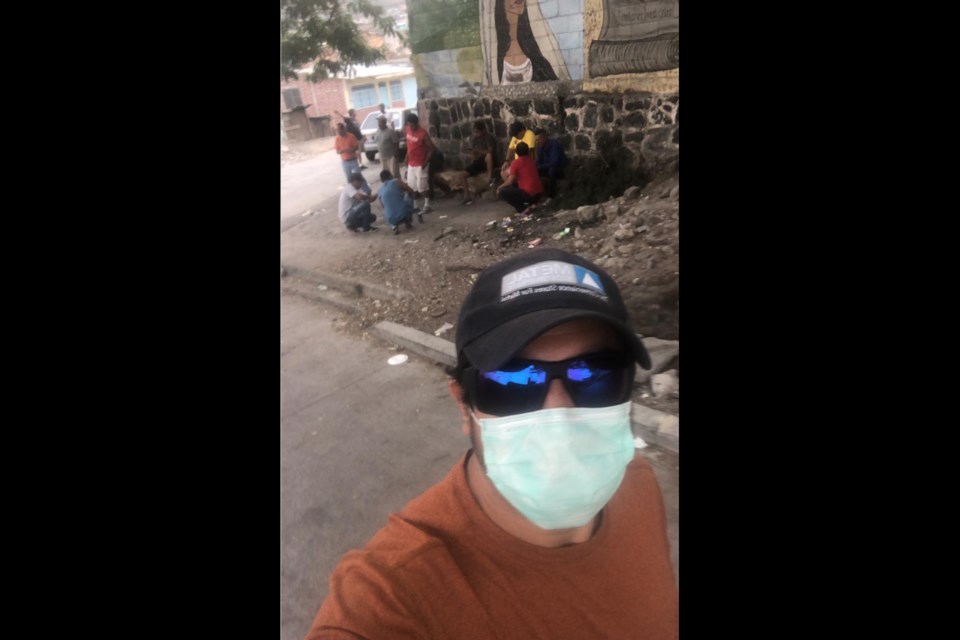 Edwin Espinal has been helping deliver food to needy families in Honduras, thanks to money donated by people in Simcoe County. Contributed photo

Money raised and donated by residents all over Simcoe County is being used in Honduran cities to feed people who are starving and facing brutal restrictions preventing them from working and buying their own food.

The Spring family from Elmvale has a strong connection to the Latin American country. Karen Spring has lived and worked there for years and married a Honduran, Edwin Espinal.

Espinal was arrested on trumped up charges and imprisoned in a maximum security jail under inhumane conditions for 18 months. He’s been released, but must still defend himself in court, whenever that resumes.

Since the COVID-19 pandemic hit, the dictatorship in Honduras has only tightened it’s cruel grip on the people.

Espinal told his mother-in-law, Janet Spring, the situation in his home country is “senseless and desperate.”

Drought has dried up water sources and made them unsuitable for drinking, forest fires rage around the capital city of Tecucigalpa, food supplies are scarce and people are policed relentlessly and violently. Each person is assigned an ID card they have to carry, the card determines which day of the week they are allowed to leave their homes – only one person from the household may leave and only once per week.

Food is scarce and people who try to sell it on the street have their wares confiscated, or worse, are beaten and arrested.

One man was killed when guards at a checkpoint beat him for not wearing a mask, reported Espinal.

Those who arrive in groups at checkpoints are also beaten, sometimes guards make them do push ups until they “break.”

“Families line the streets with signs hoping people passing by in their cars will give them help,” Espinal told his mother-in-law. “It is really sad to see people with signs asking for help. I have never seen anything like it in my life. It is very discouraging. It is very upsetting. So much uncertainty, fear, and desperation.”

Honduras has no emergency benefit program for the people. There are aid programs, some funded by organizations like the World Bank, and USAID. But those funnel cash through the government, which keeps money and supplies for those who are known supporters of the ruling national party.

People like Espinal and other social-minded organizations have created grassroots feeding programs. Thanks to funds raised by groups like the Simcoe County Honduran Human Rights Monitor, they have been buying groceries and delivering them to families in need.

Espinal and a fellow human rights activist who was also jailed, Raul Alvarez, have been helping deliver groceries.

“Raul and I are very careful when we deliver food,” Espinal told Janet Spring. “We are only allowed to go out once a week, so it is very restrictive and dangerous for those who wish to volunteer.”

Spring has been in contact with some of the community organizations who have been running food programs.

She said the food outreach programs are very important but difficult to plan, manage, and implement.

By June, the groups had delivered 250 bags of food to some of the neediest families in the capital city.

At checkpoints, guards have confiscated the food packages, stating only the government has the authority to deliver food to communities.

Still, the programs are making a difference for families who might otherwise starve, or be force to break rules and face arrest, beating, and even death.

“The people understand the need to isolate, but the government is not doing anything,” said Espinal. “The people have no choice now, so they are disobeying the rules because they are starving.”

The desperate situation in Honduras has motivated groups in Springwater, Barrie, and Midland to donate money toward the purchase of food.

A group of children from Barrie raised $200 one weekend selling homemade crafts. They first learned about Espinal and the issues in Honduras while in school, and once they heard about the food program they decided to help.

An Elmvale Business, Tiny Art Shack, has been selling macramé art created by Karen Spring, Espinal’s wife, and donating all the proceeds to the food programs.

Spring was visiting her family when the Honduran government shut the country down. She’s in Canada and has been unable to get back to her husband in Honduras since then. She will try again later this month to fly home.

Janet Spring is coordinating donations and making sure they are provided to the grassroots efforts to feed families. The groups provide photos and receipts as proof of the money’s impact.

Spring said it costs about $3CAD to feed a child one meal a day.

If you are interested in making a donation, or would like further information, you can email her at janetspring7@gmail.com or call 705-734-4238.

Simcoe region pharmacies not included in first phase of COVID-19 testing
Sep 23, 2020 7:36 PM
Comments
We welcome your feedback and encourage you to share your thoughts. We ask that you be respectful of others and their points of view, refrain from personal attacks and stay on topic. To learn about our commenting policies and how we moderate, please read our Community Guidelines.