Collingwood CAO Fareed Amin, said he expects the recommendations coming from the Collingwood Judicial Inquiry will have a 'significant' impact on small Ontario municipalities
Dec 3, 2019 1:30 PM By: Erika Engel 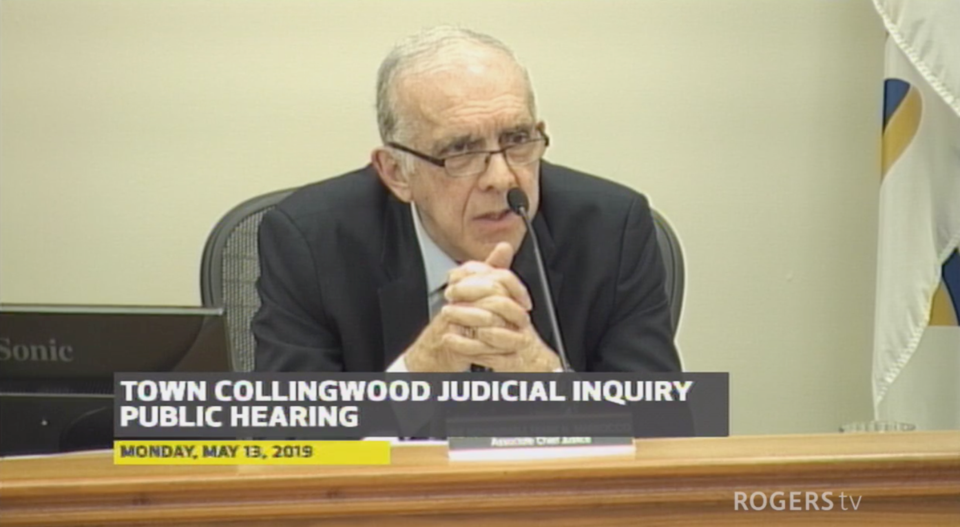 Justice Frank Marrocco is the Commissioner in the Collingwood Judicial Inquiry.

Collingwood’s chief staffer told the inquiry yesterday their efforts and recommendations have the potential to change the way small municipalities in Ontario do business.

Fareed Amin, chief administrative officer (CAO) for the Town of Collingwood, gave a presentation to the inquiry yesterday afternoon as the final witness in the final phase of the inquiry hearings.

“I think the recommendations coming out of this inquiry will have a significant impact on municipalities across Ontario,” said Amin, calling the inquiry comprehensive and noting he felt it was a necessary exercise. “I supported it because I think it was important that the people who live, work, and do business in Collingwood understand what occured in the initial sale of the hydro shares, and secondly, how the money derived from that sale was spent.”

According to Associate Chief Justice Frank Marrocco, commissioner for the Collingwood Judicial Inquiry, there have been 61 days of hearings, 650 pages of foundation documents prepared by the inquiry, half a million documents submitted by participants, 14 experts, five panels, and 14 affidavits.

The comprehensiveness of the inquiry has resulted in a cost of $5.2 million reported in November prior to the third phase of hearings.

“This is a significant investment by the Town of Collingwood, both in terms of the finances that we have dedicated to this investigation, as well as the staff resources,” said Amin. “I would probably say that this is perhaps the largest investment per capita by any public entity in Ontario, or indeed across Canada.”

Amin said he followed the inquiry throughout all three phases and heard there was “a lack of clarity in process and procedures” and he saw a “reluctance for staff to speak truth to power.”

“I think this threatens one of the very foundations of public service… we are told and we are taught to speak truth to power and to be able to provide non-partisan, objective, independent advice,” said Amin.

He suggested a whistleblower policy would be helpful for not only Collingwood but other small municipalities where senior staff can feel vulnerable and can worry the future of their job is at risk if they speak up.

Amin also listed some of the actions taken under his leadership of staff over the last two years.

“We have made a concerted effort to strengthen the organizational culture,” said Amin. “We’re trying to set the tone from the top, from the senior management team, of transparency and accountability, ethics and integrity.”

Changes include a policy requiring all correspondence from a member of council to staff be circulated to all members of council. Any policy considered is sent to all department heads for consideration and comment. The town has hired an accountability officer and a procurement officer who will be reporting annually on the town’s non-competitive purchases. There’s a new staff/council relations bylaw and in-camera meetings are subjected to additional levels of scrutiny.

Amin said he wasn’t sure if rules were well-defined under previous regimes overseeing the Town of Collingwood, including during the time of the Collus share sale and building the recreation facilities.

“I would argue that one cannot, in all instances, legislate or regulate ethics and integrity and in some cases common sense should have prevailed,” said Amin. “Those, in my view, at least at the top of the organization, were very experienced public servants who should have known better.”

Amin suggested since a small municipality is limited fiscally and in human resources, a collaboration with other municipalities could mean efficient access for all partners to a shared lobbyist registry, registrar, and legal advice.

The public hearing portion of the Collingwood Judicial Inquiry has now concluded.

Commissioner Marrocco will now work with inquiry counsel to develop a report and recommendations based on what documents and testimony revealed at the inquiry.

Marrocco said his report would be ready in February, but qualified his promise on Monday saying his staff and counsel thought he was being “optimistic” on the timing of the report.

“It’s no small undertaking that we were asked to undertake,” said Marrocco.

In the Toronto Leasing Inquiry, which was two inquiries combined, Honourable Madam Justice Denise Bellamy, the commissioner for both inquiries, released a four-volume report including 241 recommendations, many of which have been implemented in Toronto and used in other Ontario and Canadian cities. Her recommendations were on topics such as ethics, conflict of interest, procurement, and lobbying.

The Toronto Leasing Inquiry lasted three years from Sept. 30, 2002 to Jan. 7, 2005 and cost approximately $11.4 million. The inquiries were called to take a closer look at computer and software leasing by the city at the time of amalgamation (1997 to 1999), and to look into external contracts for billing system software, purchasing computers, and IT consulting. There were more than 124,000 pages of documents, 156 witnesses, 214 hearing days, and more than 60 lawyers involved in the Toronto inquiry.

Public inquiries 'shine a light in the cracks' says former commissioner
Nov 27, 2019 1:45 PM
Comments
We welcome your feedback and encourage you to share your thoughts. We ask that you be respectful of others and their points of view, refrain from personal attacks and stay on topic. To learn about our commenting policies and how we moderate, please read our Community Guidelines.