A panel of experts on procurement shared their experience and expertise on purchasing with public funds at Collingwood's Judicial Inquiry hearings on Friday (November 29)
0
Dec 2, 2019 11:50 AM By: Erika Engel 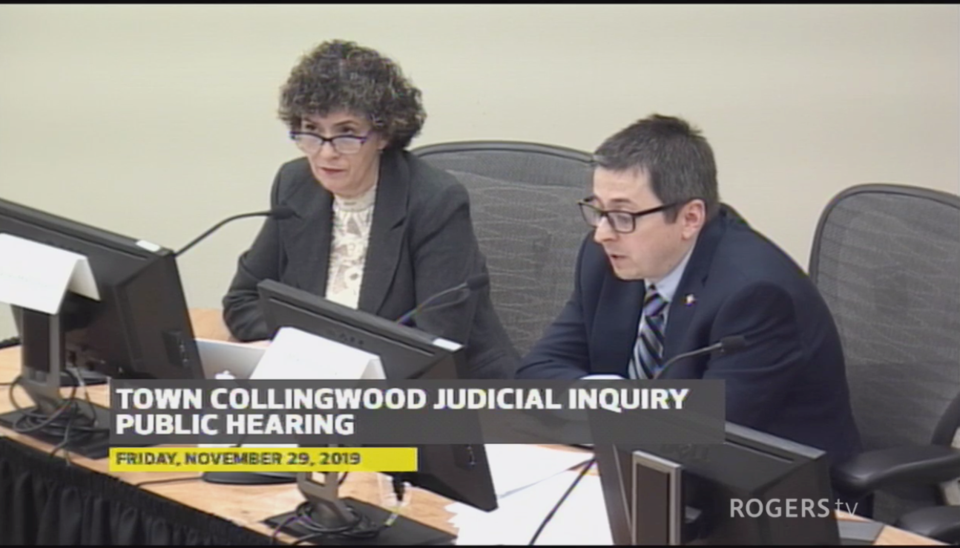 A hefty, comprehensive set of bylaws surrounding purchasing and procurement is the best way to make sure public spending is transparent.

That’s according to a panel of two public procurement experts who shared their expertise and advice at the Collingwood Judicial Inquiry on Friday.

Marian MacDonald and Mike Pacholok made up the panel on procurement. MacDonald spent 10 years of her career as assistant deputy minister of Supply Chain Ontario where she led a team of 180 procurement professionals overseeing $6 billion in annual spending.

Pacholok is chief purchasing officer for the city of Toronto where he oversees $2 billion in annual spending for goods and services.

MacDonald said a carefully prepared set of bylaws and clear communication from the outset of a project or budget process ensures everyone is on the same page.

“There are no surprises, you know what to expect,” said MacDonald. “Critical to projects is planning and decision-making before you go out to tender.”

According to MacDonald and Pacholok’s presentation, a procurement policy ensures publicly-funded goods and services are acquired through a process that is open, fair, and transparent.

They said it should be procurement staff who recommend the most appropriate procurement method and oversee the process, including gathering market data and being the contact point for vendors prior to and during the process. That communication is a key component in a fair procurement process, according to the panellists, including a follow-up conversation for unsuccessful bidders.

Politicians (council) plays a role in approving procurement policy in general and approving budgets for services and goods. They should, however, remain at arm’s length from staff and vendors throughout the procurement process.

Each party involved in procurement should have a responsibility to avoid and identify conflicts of interest, according to the panellists.

A robust policy also helps a municipality achieve the best value for money through a competitive process, outlines roles, responsibility and accountability, and ensures procurements are managed consistently and comply with relevant trade agreements.

Both MacDonald and Pacholok said it’s important for a procurement policy to address all procurement scenarios, including competitive and non-competitive.

During the Collingwood Judicial Inquiry, there’s been some discussion about sole-sourced contracts, which was the method used to choose a contractor to build Central Park Arena and Centennial Aquatic Centre.

“Non-competitive procurements happen, they need to happen, and there are good reasons they happen,” said MacDonald, giving the example of a provincial government needing to buy vaccines during an emergency or cases where there is only one vendor in the marketplace.

“The danger is single-sourcing where there are multiple suppliers and you have chosen one… without that open and transparent process,” she said. “I think that’s where you get into trouble.”

Pacholok explained there is something called an advanced contract award notice that can be put into the marketplace stating the municipality is entering a contract with a certain vendor for a service. This notice allows the marketplace to respond if there’s someone else who can provide the same service.

Another important step, said MacDonald, is making sure you’ve clearly identified your needs so the marketplace can respond. In some cases, that could mean hiring consultants and paying for their expertise on the goods or services.

“Procurement staff are not going to be specialists on everything that the public sector needs to buy,” said MacDonald. “We have to bring in experts to help us navigate that community from time to time.”

With clearly defined roles for staff, politicians, and vendors, the panellists still say there’s a constant need for legal counsel in the purchasing process.

“Early in my career I was told procurement is a synonym for litigation and I always took that to heart,” said MacDonald. “I wouldn’t do any kind of procurement without legal counsel.”

The public hearings for the Collingwood Judicial Inquiry are scheduled to conclude today with two sessions.

At 12:30 there is a panel on lobbying featuring Suzanne Craig, Linda Gehrke, and Robert Marleau.

Gehrke is a retired lawyer who served as lobbyist registrar for the City of Toronto from 2008 to 2016.

Amin’s testimony will conclude phase three inquiry hearings, which are intended to provide experience, information, and advice for Commissioner Associate Chief Justice Frank Marrocco as he prepares his report and recommendations at the conclusion of the inquiry.

Previously, phase one of the inquiry dealt with the 2012 share sale of 50 per cent of Collus to PowerStream. Phase two focused on the allocation of those sale proceeds to build two fabric membrane recreation facilities - Central Park Arena and Centennial Aquatic Centre.

You can watch the inquiry hearings live today at the town hall council chambers, on Rogers TV, or online here.

For more information on the inquiry, including transcripts of all past hearings, visit the inquiry website here.

Public inquiries 'shine a light in the cracks' says former commissioner
Nov 27, 2019 1:45 PM
Comments
We welcome your feedback and encourage you to share your thoughts on this story. We ask that you be respectful of others and their points of view, refrain from personal attacks and stay on topic. To learn about our commenting policies and how we moderate, please read our Community Guidelines.