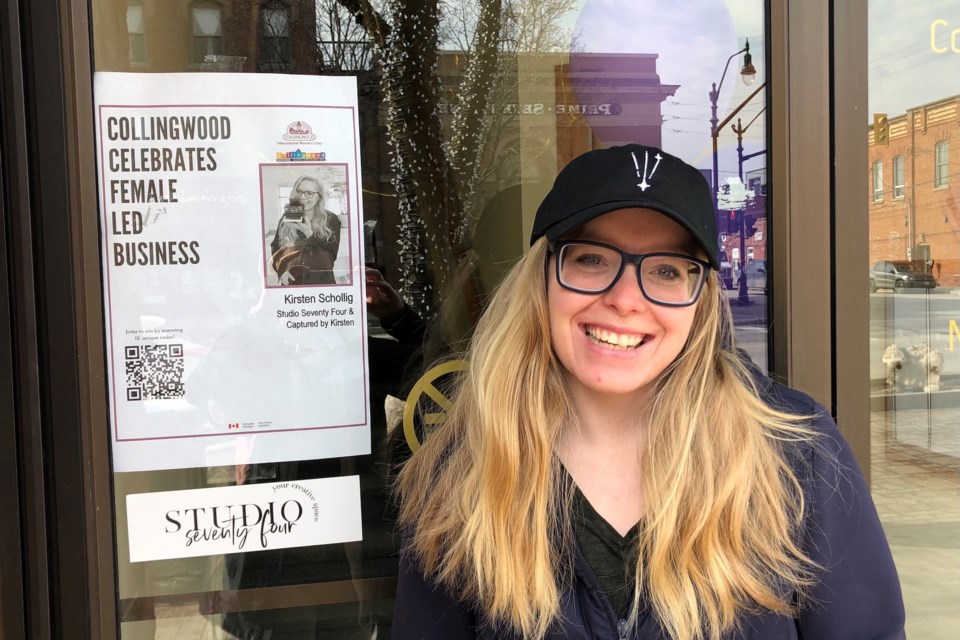 Kirsten Schollig, wedding and branding photographer behind Captured by Kirsten and owner of Studio Seventy Four, stands outside her studio on Hurontario Street.Maddie Johnson for CollingwoodToday

In honour of International Women’s Day (IWD), the BIA is displaying posters in businesses throughout downtown that are either owned or managed by entrepreneurs who identify as female.

“When you look at the makeup of the downtown, it is really skewed to women-led businesses. It’s wonderful,” said Susan Nicholson, general manager of the Collingwood Downtown BIA. “[The posters] are a great opportunity for them to tell their story.”

Women Behind the Business posters feature respective female entrepreneurs and the “why” behind their business ventures, along with a unique QR code. The BIA is inviting people to scan at least 10 different posters around town to be entered into a draw, with the chance of winning a prize pack filled with products from downtown businesses.

“These are the faces behind the brand,” said Shay Riordan, owner of Shea Organics. “The posters really create awareness for people walking down the street to see just how many businesses are women-owned. I think it just shows that women can do anything.”

Shea Organics is a beauty and skincare store that features products by exclusively female and LGBT-owned companies. The store celebrated its third anniversary on Ontario Street on Mar. 1.

“Because the downtown is primarily women-owned, I think people get the idea that we would want to tear each other down,” said Riordan. “But it’s quite the opposite in Collingwood. We try to collaborate instead of compete, and we are always making efforts to help each other out.”

“I’ve always been somebody who believes in community over competition, but it wasn’t until I opened a business in Collingwood that I really got to live out that saying,” said Schollig. “It’s been an incredible journey to truly connect with all of the female entrepreneurs in this town, in one of the largest entrepreneurial communities in Canada.”

This year, the BIA was able to showcase 31 businesses, and plans to expand the campaign to include even more female business owners and entrepreneurs next year.

“I think it is important to really show, not only the entrepreneurial spirit, but the fact that women are taking much more of a leadership role in the business community,” said Nicholson. “Whether it’s key managers at businesses that are owned by someone else or they have actually taken the leap and put a lot of things on the line to really follow their dream… It’s great.”

The posters will be displayed around town from Mar. 8-14 and are also available on the Collingwood Downtown website for people to read the entrepreneurial stories at their leisure.

In addition, the Collingwood Museum has contributed eight signs that honour women from Collingwood’s past, such as notable business-owners, war-time workers, medical professionals and sports heroes. The signs feature a photograph and short write-up about each trailblazer and can be found displayed along Hurontario Street. The town also introduced the next edition of its StoryWalk, featuring The Proudest Blue: A Story of Hijab and Family.

Jenn Walker, who is the founder of Dive Heart First Coaching as well as the community coordinator at the Collingwood Foundry said her experience as a female entrepreneur in Collingwood has been “outstanding.”

Walker attended the SBEC’s International Women’s Day event several years ago — prior to moving to Collingwood — and it is a big reason why she moved her business to the area.

“It was the easiest transition I have ever made both personally and professionally,” said Walker. “This is a community of fierce females coming together, inter-referring, sharing what we’re up to, and being each other’s biggest cheerleaders and supporters.”

Walker is excited to celebrate this sense of community at the Foundry’s event on Friday.

“This year has been long,” she said. “I think stories are what connect us and I am excited to hear everyone’s stories in the community and become connected even further as a community.”