A Collingwood-based couple has joined in marriage and in art for their commissioned work that comes from a partnership that began in their youth
Feb 24, 2021 11:31 AM By: Maddie Johnson 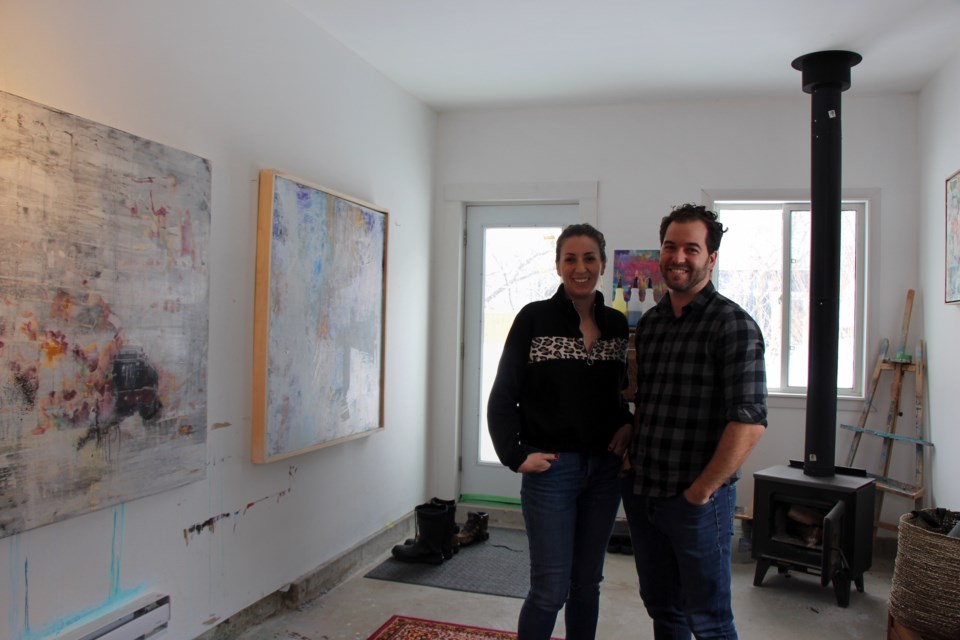 If love is an art, then Amanda and Kiel Wilson-Ciocci are master artists in more ways than one.

Both originally from Guelph, Kiel and Amanda met as youth and started dating when they were just 16-years-old. Kiel has always enjoyed art, drawing and sketching, while Amanda’s creativity remained closeted for many years. She always appreciated art, but opted to apply for business school instead.

However, after receiving her acceptance she decided not to go, and the young couple took off on a backpacking trip through Europe instead. They fell even more in love with art and each other. Spending time wandering the ancient cities of Rome and Florence they were continually inspired by all of the art and history around them.

“Seeing that you could have that kind of impact on other lives by creating a sculpture or piece of art,” said Amanda. “It was so inspiring.”

When they returned home, the two enrolled in art school together at the University of Guelph, where they dabbled in all different kinds of materials and mediums. Despite being in all the same classes, Amanda and Kiel had completely different styles, but they always worked closely together, commenting on each other’s work and offering advice.

“That is sort of where the seeds of Kiam started,” said Kiel. “The dialogue and the back and forth was already there. We were still collaborating, just not on one piece.”

Kiel and Amanda got married at 25, and after art school, they moved to Orillia to attend Teachers College. Amanda was pregnant with their first child, so she stayed home while Kiel went to school, and the following year they switched — Kiel stayed home with their son while Amanda went to class.

On weekends, the young family would escape to Collingwood, where they were inspired by the lifestyle and the surrounding landscapes. Art was still their number one outlet, and it was during this time that they took a swing at producing a piece together.

“The process of actually having two perspectives on one canvas kind of took form at that time,” said Kiel. “We enjoyed the unpredictable nature of it… So after that, we kind of just continued.”

They applied to Art on the Street in Guelph and got in, and found themselves collaborating on a whole body of work. The show sold out that same day, with Kiel’s sister purchasing their very first collaborative painting — which she still has to this day.

“So we said 'well okay, that clearly resonates,'” said Amanda.

They had amalgamated their art, so they merged their names as well, and Kiam Studio was born. They enjoy the process of working together, and the “calculated unpredictability” that came with it.

“Sometimes, when you are doing something by yourself you can get stuck. But now, Kiel can just come in and make magic,” Amanda said.

Their style is described as mixed media, with a range of different materials incorporated into a single piece. Using thick layers of acrylic paint, gel mediums, photographs and washes, their goal is to create art that forces its audience to slow down and appreciate the world around them.

“It is their experience to have that with the painting,” said Amanda. “It’s not so prescriptive.”

“You can look at a piece and see or feel something different than somebody next to you,” said Kiel.

Their only real rule is that both of them have to agree a painting is complete before they show or sell it to anyone else.

“We are often inspired by our environment. Our experiences in certain places,” continued Kiel.

“We’ve had people describe our work as ‘dreamlike.’ They say it’s almost like a dream, where they are reminded of a memory but I don’t exactly know where it is,” Amanda said.

After Teachers College, their environment changed once again. Pregnant with their second child, Kiel and Amanda moved back to Guelph to raise their children closer to home. They continued producing art, converting part of their property into a home office and studio. Kiel worked as a supply teacher and Amanda in project management, and in their spare time, they would host workshops and events out of their home studio, selling directly from the space as well. And then an opportunity arose to move into a separate studio.

“We weren’t really planning on getting another space, but it came about so we jumped on it. It was fantastic,” said Kiel.

They called it Art in the Ward, and turned it into a collaborative space where artists of all kinds could come and create together.

They held everything from wine and art nights to classes and cancer fundraisers, fostering a creative hub for the community.

Art consumed the couple’s hearts, but so did travel, so in 2018 Amanda and Kiel took a break from the studio and decided to head back to Italy, this time with three kids in tow. At the same time, their love of Collingwood never ceded, so when they returned home, they finally sold their house and made the move north.

“We said let’s stop talking about doing it and just do it, because when we do the things we love, we actually feel super excited about it,” Amanda said.

They toyed with the idea of continuing to run the studio in Guelph, but decided to “gift it” to their mentees instead — easels and all.

“They were a couple of students, and they were amazing… All about community, inclusivity and collaboration,” said Amanda. “So when we left, we gave them the opportunity to take it over.”

But there were rules. According to Amanda, the new owners had to keep the studio as a community art space, they had to be inclusive to anyone who needed the space, be kind, and if they ever wanted to let go of it they had to contact Amanda and Kiel first.

“They were able to take it further than we could,” said Amanda. The space is now called Otherwise Studios.

They arrived in Collingwood in March of 2019 and started integrating themselves into the local art scene almost immediately. Kiel and Amanda enjoyed exploring their new environment for inspiration. They converted their garage into a home studio to continue producing art for their clients, intermingling it with their busy lives of homeschooling three children and running Amanda’s other business, The Monarch & Co. — an online company that helps heart-centered entrepreneurs build, grow, launch and scale their businesses.

“I think that true collaboration is hugely based on trust. Not just in what we do, but in anything,” said Kiel. “Art, work, relationships, family. Everything.”

“And a shared vision, too,” added Amanda. “We want to end up with something that we are both happy with, so let’s just trust the process and we will get there.”

Kiel and Amanda have several ideas of how to add to the local art scene, and haven’t taken the idea of opening another studio off the table. For now, they are “trusting the process,” creating commissioned work for their clients, hosting pop-ups when restrictions allow, and enjoying taking some time to slow down as well.

“Our art asks its audience to slow down and really look at the painting. Be aware of your senses, take it all in,” said Amanda. “So right now, we are doing that in real life. We want to reflect on this past year a little longer, before we start commenting on it.”

For more information about the collaborative artists or to commission a piece, visit their website.

Trending in What's Up Wednesday