'When you are working for yourself, and you are surrounded by other people doing the cool work that they are doing, it creates this really cool energy,' said Brandon Houston, CEO and founder of one of Collingwood's co-working communities
Oct 15, 2020 12:30 PM By: Maddie Johnson 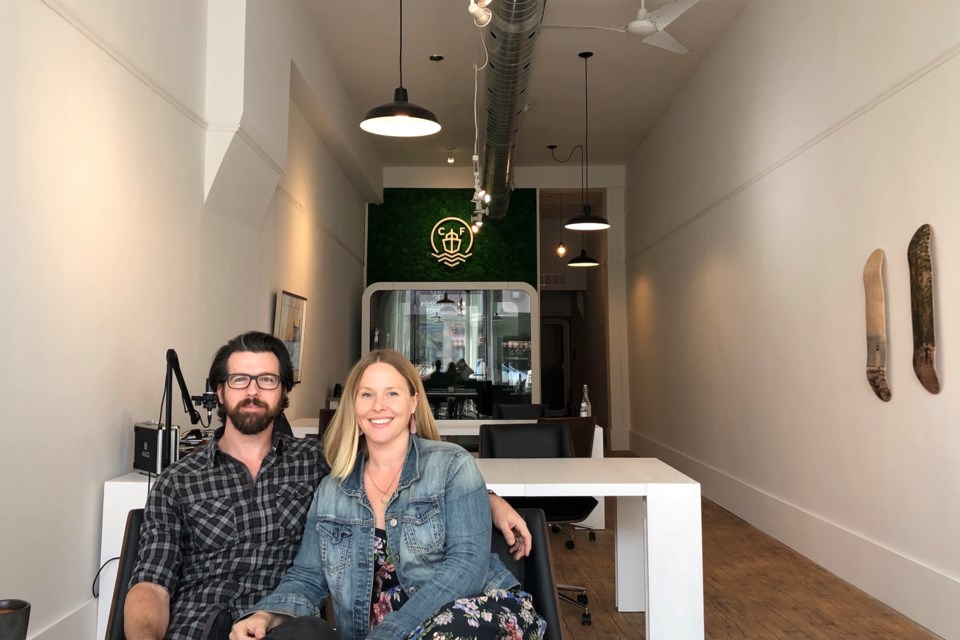 Brandon Houston and Jenn Walker's mission with The Foundry is to create a community for like-minded entrepreneurs in Collingwood. Maddie Johnson for CollingwoodToday

That's why in Collingwood, entrepreneurs have linked together to form a neighbourhood.

As local business owners and start-ups have formed a community, some hubs have emerged, both physical and figurative. One such hub is the Collingwood Foundry.

“Surrounding yourself with other entrepreneurs is different than working for a company and being surrounded by employees,” said Brandon Houston, founder and CEO of the Foundry, a creative coworking space located downtown Collingwood.

“When you are working for yourself, and you are surrounded by other people doing the cool work that they are doing, it creates this really cool energy.”

Located at 60 Hurontario St, the Foundry opened in 2016 with the intention of creating a space for cross-community collaboration, idea sharing and engagement, and has quickly become a hub for independent business owners and entrepreneurs based in South Georgian Bay.

Previously known as the Creative Space, the coworking community was rebranded last year to pay homage to the town’s shipbuilding history.

“Collingwood has always been known as the community that built and launched ships. How we look at the Foundry as it is now, is as a community to help build, nurture and launch businesses and entrepreneurs,” said Houston.

“I don’t know what the secret sauce is, I really don’t,” laughed Houston. “Entrepreneurship is really what helps define the culture of a community. Without entrepreneurs, you wouldn’t have culture. But Collingwood is full of them.”

An entrepreneur himself, Houston founded the co-working space to fill a need he had as a new business owner.

After selling his web development business, Houston moved to Collingwood five years ago and acquired a video animation company called Switch Video. The company’s office, which housed only nine employees at the time, spanned the entire upper floor of where the Foundry now occupies. Houston had the idea of renting desk space out to interested entrepreneurs in order to fill the space and subsidize the lease.

That’s when Carl Michener came knocking at the door.

“I said I liked the space, and I asked to work there,” Michener said.

So just like that, Michener, owner of Outwrite Communications, became the Foundry’s first member, and it snowballed from there.

“We just kind of grew organically,” said Houston. “And then some of the coolest things started happening. Our members started working together, they started hiring each other and helping each other’s businesses grow. And that was all just by being in proximity with each other.”

Michener still operates his business out of the space today, and said he is currently working on projects with four other firms he met through the Foundry.

“Coworking is important for any community, but in a town like Collingwood it’s even more intimate and less impersonal,” said Michener. “It’s kind of like a living Rolodex of what is going on and who is who.”

The creative space now hosts well over 30 full- and part-time members. And as the community grew, so did the demand, and Houston brought aboard his life partner — now business partner — Jenn Walker, to continue its growth.

Walker, who is also an entrepreneur and a coach for heart-centred entrepreneurs through her business, Dive Head First coaching, moved to Collingwood three years ago and was “blown away by the community.”

“I have never felt so supported,” said Walker. “I’ve never had people welcome me and my business so openly. It was the easiest transition in my life.”

In an entrepreneurial love story for the ages, Houston and Walker actually met through the Foundry. Together, they continue to build the coworking community through potlucks, socials, coffee chats and collaborative workshops, among many others.

Earlier this year, they expanded the space into the bottom floor of the building as well, allowing for more accessibility and a better presence on the main street.

“We continue to build the community because we really want to nurture that connection,” said Houston. “More than just an office for entrepreneurs... Come for events, come for workshops, come to collaborate.”

“It's a space to spread and share ideas,” added Walker.

Everyday, Houston and Walker are humbled by the sense of community — and the creativity — in Collingwood.

“It’s big city thought in a small town,” said Walker. “I don’t think you can replicate this community anywhere else.

And while neither of them is native to the area, they now both play a massive part in making others feel as welcome as they did when they first arrived.

Together, they facilitate a group called Common Ground, where they hold space for creatives and entrepreneurs of all ages and stages in their business to share, connect and grow together. As entrepreneurs themselves, they understand the constant struggle of owning and building a business, and promote the power of peer mentorship.

“Everyone is at a different stage, but everyone has shared experiences,” said Houston. “The entrepreneurial journey is similar, we all share that common ground. We want people to feel comfortable, safe and supported so they can come in and talk about the things they really need help with in their business.”

Houston and Walker are also always finding ways to feature local businesses at the Foundry, from having Collingwood Kombucha on tap to bringing in local artists to showcase and sell their work.

“Entrepreneurs are the ones who come in and build a community that other people are then drawn to,” said Houston.

Entrepreneurs are also the first to protect that community.

“It’s the future-esque conversations,” said Walker. “Really thinking about how amazing the essence is of this community, so as we expand and grow and more people find out about it, how can we create and sustain that essence.”