In this week's Remember This, learn about the canaller built in 1912 by Collingwood Shipbuilding Co. Limited
Feb 23, 2020 1:00 PM By: Remember This? 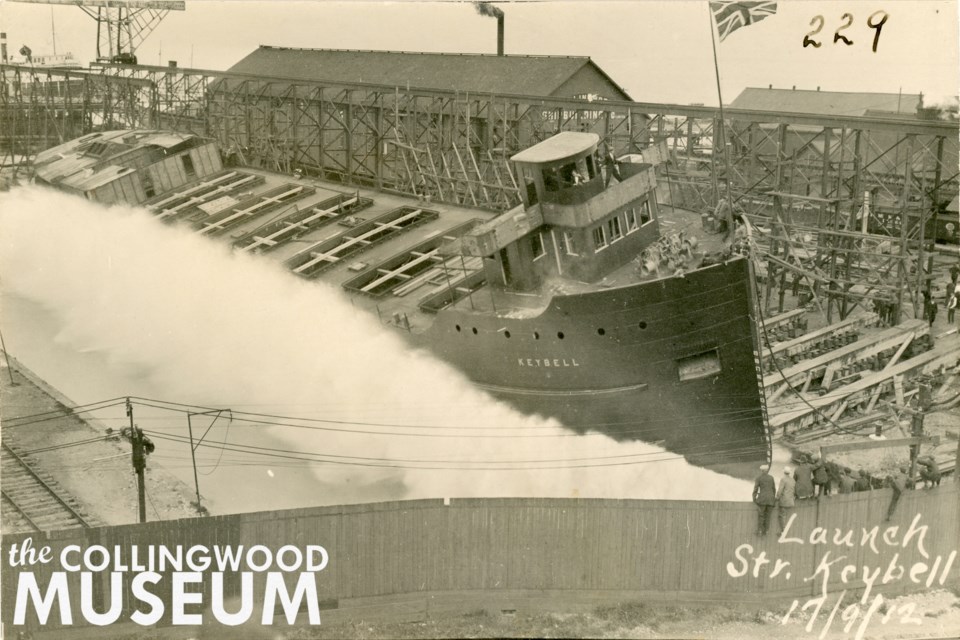 Today’s feature photograph captures the spectacular launch event of the canaller Keybell in Collingwood’s harbour on September 17, 1912. At least twelve men can be seen on the ship’s deck and in the wheelhouse, gripping its various surfaces with all their might to prevent themselves from being pitched over the ship’s starboard side.

A few men and boys perch atop the wooden fence that spans the foreground, staying a safe distance from the launch’s spectacular wave.

Upon close inspection, the wheelhouse windows are empty with the glass inserts not yet installed. Similarly, hatches have not been placed over the empty cargo holds along the ship’s length.

Launching a ship prior to its completion was not an uncommon event at the Collingwood Shipyards. In fact, the last ship to be launched in Collingwood, the ice breaker Sir Wilfrid Laurier, plunged into Georgian Bay without its signature superstructure and vibrant red hull making it nearly unrecognizable.

Keybell was built for Keystone Transports Ltd. out of Montreal by the Collingwood Shipbuilding Co. Limited as Hull 37. She was the only ship in Keystone’s fleet to be built outside of the United Kingdom.

Each of Keystone’s vessels were created with the size of the St. Lawrence canals in mind. At 79 metres (261 feet) in length, Keybell was a noticeably tight fit in the years preceding the St. Lawrence Seaway. At the time of Keybell’s construction, the third iteration of the Welland Canal boasted locks measuring 4.3 m (14 ft) in depth, 82.3 m (270 ft) in length, and 13.7 m (45 ft) in width. This lock would have left less than 10 feet of clearance for Keybell’s hull.

Keybell’s main trade was in coal, hauling between Lake Erie’s coal ports and Montreal. She was also known to haul wheat and pulpwood.

She was taken out of service during the St. Lawrence Seaway’s construction at the end of 1956 and remained in this state of disuse until being scrapped by the Kingston Dry Dock Co. Ltd. in 1961.

If you have any information to share about today’s featured photograph, please contact Museum Supervisor Melissa Shaw at mshaw@collingwood.ca.