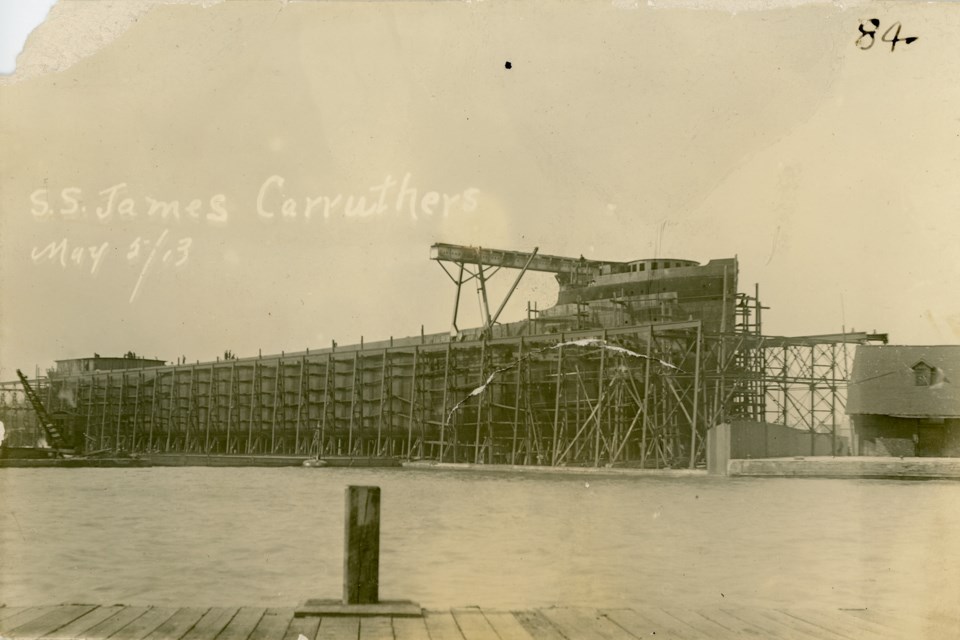 The James Carruthers, built in Collingwood and launched May 22, 1913, sunk a few months later during the Great Storm of 1913. It's crew was killed when the ship sank. Contributed photo: Huron Institute 84; Collingwood Museum Collection X969.540.1

This weekend marks the 105th anniversary of the Great Storm of 1913, the most destructive natural disaster recorded on the Great Lakes. Nicknamed the “Storm King” and “White Hurricane,” the storm lasted four long days between November 7 and 10.

Just five months earlier the largest ship on the Great Lakes was under construction in Collingwood: Hull 38 James Carruthers. The steamer is pictured above in the course of construction on May 5, 1913 along the Hurontario Street launching basin, the present site of the Promenade Trail.

Launched on May 22, 1913, the vessel left Collingwood on its maiden voyage in June. On November 6 the James Carruthers took on a load of grain at Fort William and left for the lower lakes. Just three days later she was overtaken by the storm and disappeared in Lake Huron with all hands on deck. At the time of sinking, the vessel was valued at $410,000. The exact position of the wreck has yet to be discovered.

Over the course of the storm’s devastation more than 250 crew members drowned, 19 ships were sunk, and 19 others were stranded on Lakes Huron, Michigan, Erie, and Superior. As news of the storm’s ferocity and destruction began to break, the people of Collingwood prepared for what would become the greatest single tragedy to touch the town in recorded history. Many local families held significant and lengthy ties to Collingwood’s shipping industry, whether through the Collingwood Shipyards or service on the lakes as captains, engineers, mates, stewards, and cooks. The number of Collingwood dead is estimated at 27 aboard four vessels: Wexford, Regina, James Carruthers, and Leafield. The sinking of the Leafield claimed 17 of the 27 lives.

A public memorial service was held under the auspices of Mayor Gilpin and Collingwood Town Council on November 23 in the Opera House at Town Hall. Many in attendance were required to stand as vacant seats were taken well before the service began, despite children being barred from entry.

A memorial window was unveiled in All Saints’ Anglican Church in January 1931 that bears the following inscription: “To the Glory of God and in Commemoration of our Merchant Marine Sailors who Lost their Lives in the Great Storm of 1913.” This is the only known local memorial to the men and women who lost their lives in this tragic storm.