Here's what Collingwood was doing 100 years ago today

A photo from the Collingwood Museum archives shows Collingwood 100 years ago on this day when its citizens received word of the end of fighting for the First World War.
Nov 11, 2018 8:00 AM By: Remember This? 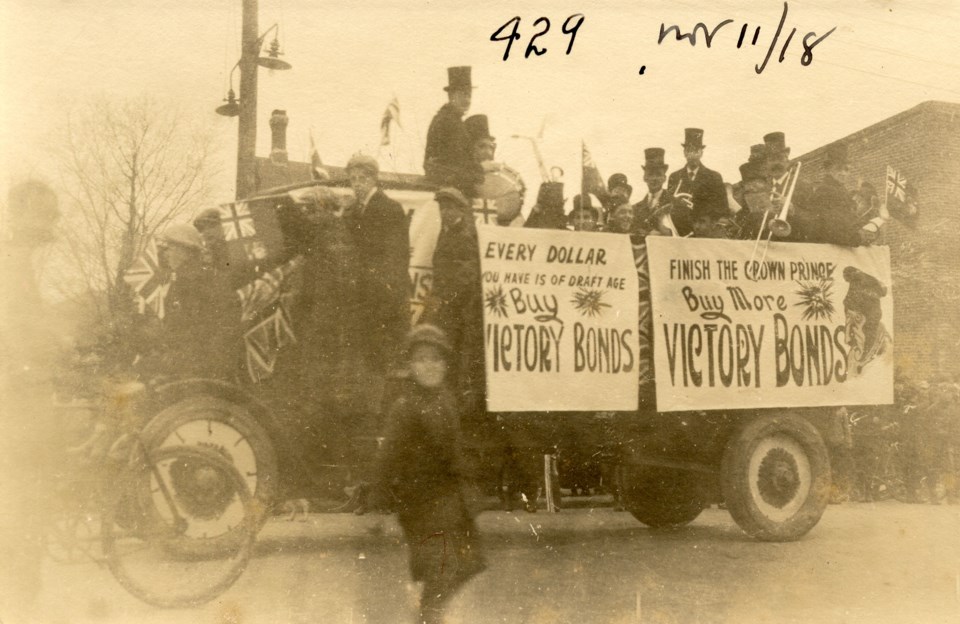 This photograph was taken on Collingwood's main street 100 years ago today on Nov. 11, 1918. It was Armistice Day and would later be known as the end of the First World War. Contributed photo: Collingwood Museum Collection, X969.537.1

On this day 100 years ago, the First World War came to an end with the signing of an armistice between Germany and the Allies. It marked the end of fighting that had gone on for more than four years.

There were celebrations across the world to mark the end of the fighting – officially, the First World War ended with a peace treaty signed in 1919. In Collingwood, members of the local Victory Bonds sales team and a local band piled into a truck to parade down the main street. On the side of the truck were signs encouraging people to buy Victory Bonds.

"Every dollar you have is of draft age, buy Victory Bonds," read one sign.

"Finish the crown prince, buy more Victory Bonds," reads another. Crown Prince would likely have referred to Friedrich Wilhelm Victor, the eldest son of the German Kaiser and last crown prince of the German Empire and Kingdom of Prussia, which fell on Nov. 5, 1918 during a revolution that led to the Kaiser abdicating his throne.

This photo was taken in Collingwood on Nov. 11, 1918 and is part of the Collingwood Museum's collection. There was a homecoming parade in August, 1919, that included soldiers from Collingwood who had returned home after the war. But on Armistice Day, it was left to those who were still at home to celebrate the end of fighting overseas.

According to museum records, Collingwood received awards for high sales of Victory Bonds, achieving 50 per cent more than the sales goal for the community.

For photos like this and more, visit the Collingwood Museum for the First World War exhibit, which is on display until Monday, Nov. 12 at 5 p.m.