In this week's Remember This: the cornerstone ceremony at the Collingwood federal building.
May 6, 2018 10:00 AM By: Remember This? 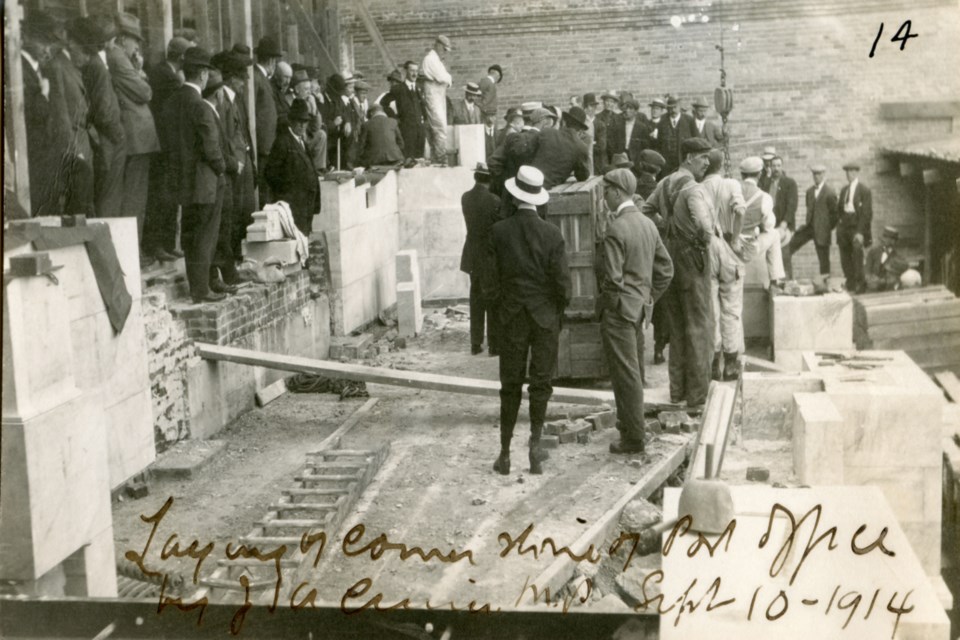 This week’s Remember This features a photo depicting the laying of the cornerstone of the Federal Building on Sept. 10, 1914.

Although this event was important, it was very rushed and happened unexpectedly. The cornerstone was to be laid by a Minister of the Crown, but this was impossible due to the changing conditions of war, so Colonel John A. Currie was invited to place the stone.

Currie was a member of Parliament for North Simcoe, as well as commander of the 48th Highlanders, who were just two days from sailing to Europe to fight in the war. Currie arrived in Collingwood at noon, and was immediately rushed to lay the cornerstone. Although the event was planned on short notice, a large crowd was already gathered at the building by the time Currie arrived. After a short speech from Mayor D.C. Barr, Currie laid the cornerstone and gave a final speech, ending the ceremony and allowing construction to continue. The Federal Building was officially opened Feb. 14, 1915.

The Federal Building was designed by local architect Philip C. Palin and was constructed by the Bryan Manufacturing Company of Collingwood and Michael Healy of Toronto. The design was inspired by the state finance building in Havana, Cuba, and is an example of the Beaux-Arts style. This style was developed in the last decades of the 19th century in Paris, France. The Federal Building was built to hold the post office and customs house. Today it is home to the Service Canada Centre.