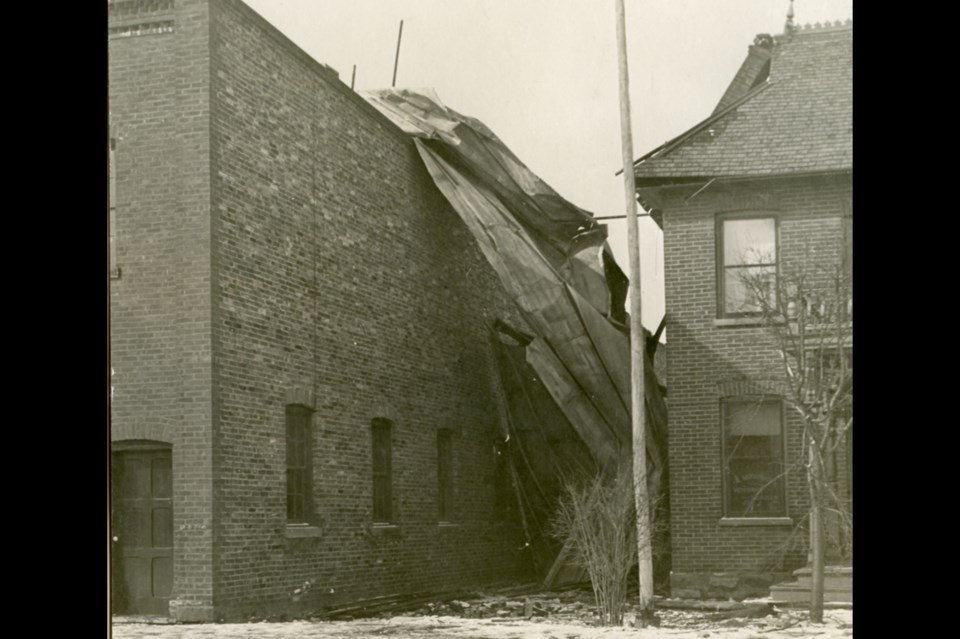 In 1913, Collingwood experienced an Easter windstorm that damaged at least three buildings. The damage sustained by the south end of today’s Curling Club building was explored in a previous post on November 24, 2019.

Two nearly identical photographs in the Collingwood Museum’s photograph collection document the damage sustained by two neighbouring buildings on the west side of Hurontario Street, between Third and Fourth Streets.

The two-storey brick building on the left side of today’s featured photograph was a livery stable owned by William Angel Tom. The metal sheeting that extends from the roof to the ground, between the two buildings, is recorded to be the livery’s roof that was blown off by the wind’s force.

The building on the right was owned by Andrew McFadden. The sign for his veterinary office is just visible on the lower pane of the first storey window. Damage to this building is also visible in the leaning brick chimney along the roof’s south side, as well as the roof’s loosened hip boards and sagging soffit.

In 1913, McFadden was one of two veterinary surgeons in Collingwood. Both operated their businesses out of their residences. The other veterinarian, Henry VanZant, lived on the west side of Minnesota Street near Hume Street.

Tom McFadden was born in England in 1853 and lived in Plymouth until 1869 when he came to Canada. In Oshawa, he apprenticed as a blacksmith and carriage builder before arriving to Collingwood in 1898. Here he carried on a livery business for some time, and then a garage. From 1906-08 he was a councillor, and the reeve from 1909-1915. In 1930 he was a warden of Simcoe County.

Tom is also recorded to have been the president of the Tom Construction Company, which built armouries and erected Collingwood’s exhibition building in 1911. The latter building functions as today’s Curling Club – the other local structure damaged in the storm.

Both Hurontario Street buildings featured in today’s photograph continued to stand into the 1950s, but the years of their demolition are unknown.

If you have any information to share about the buildings or people featured in this article, please contact Museum Supervisor Melissa Shaw at mshaw@collingwood.ca.