Remember This: Collingwood's First World War volunteers were instrumental in building Base Borden.
Nov 18, 2018 9:00 AM By: Remember This? 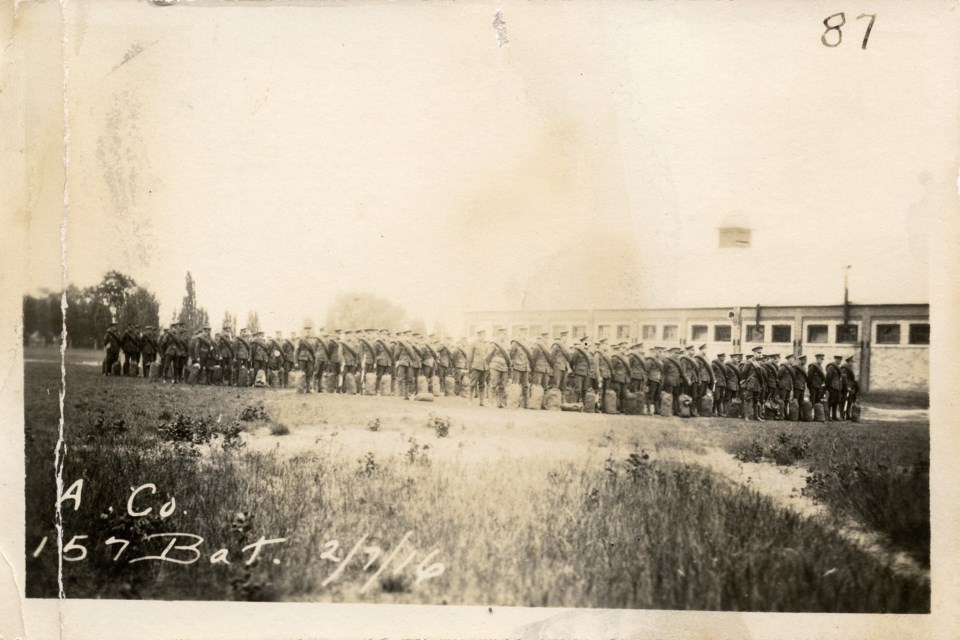 The 157th Battalion A Company was made up of many Collingwood volunteers. Contributed photo: Huron Institute 87; Collingwood Museum Collection X2014.70.1

The 157th Battalion “A” Company has a special connection to the Collingwood region as the majority of its ranks were filled by recruits from Collingwood, Creemore, New Lowell, Stayner, Duntroon, Batteau, Nottawa, and Sunnidale Corners.

In this week’s Remember This featured photograph, “A” Company stands in formation beside Collingwood’s Armoury, now the Collingwood Curling Club, prior to departure for Camp Borden on July 2, 1916.

The Collingwood-raised company worked alongside recruits from the Barrie area to construct Camp Borden. For this reason, the 157th was the base’s founding battalion and was onsite for its official opening on July 11, 1916.

The 157th Battalion left Halifax aboard the S.S. Cameronian on October 18, 1916, arriving in Liverpool, England, on October 28. Upon their arrival, members of the 157th were trained and dispersed to active units as reinforcements. For this reason, the original members of “A” Company served in various battles throughout the war’s duration.

In 2011, staff at the Collingwood Museum researched the members of “A” Company using the digitized personnel records on the Library and Archives Canada’s website. Attestation papers for each soldier have been printed and alphabetized for research purposes. If you are interested in viewing this collection, please contact museum staff.