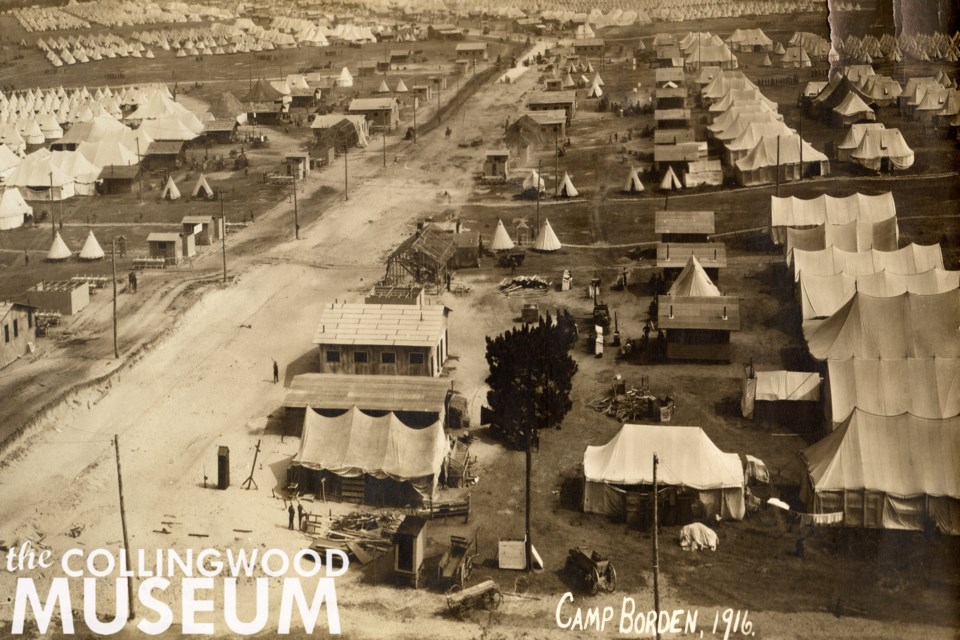 Today’s photograph showcases a very busy Camp Borden in 1916. At least five wooden buildings are in the course of construction with piles of supplies located close by. Photo supplied by the Collingwood Museum from the Huron Institute 166-174; Collingwood Museum Collection X2009.29.1

Canadian Forces Camp Borden has an interesting link to Collingwood. Not only did a locally formed company of the 157th Battalion assist in building the base, but a number of photographs of the base’s beginnings are preserved in the Collingwood Museum’s photograph collection.

Between 1904 and 1939, the Huron Institute collected ten such photographs. The vague descriptions included in the original collection catalogue make finding these photographs quite difficult; however, an impressive photograph has been selected for today’s feature that matches the “Camp Borden, 1916” description to the letter.

Today’s photograph showcases a very busy Camp Borden in 1916. At least five wooden buildings are in the course of construction with piles of supplies located close by.

More than 50 completed wooden structures appear in close proximity to the large tents. The buildings are most visible along the photograph’s right side. If one didn’t know better, the tents could be confused for circus tents.

Various groups of soldiers appear in formation throughout the landscape, as do horses and wagons. More than 36 hydro poles are also visible.

Perhaps the most noticeable feature is the single tree that appears as a stark black presence in the photograph’s foreground.

Local soldiers who enlisted in ‘A Company’ of the 157th Battalion assisted in building Camp Borden and may have been on site when this photograph was taken. The Collingwood-raised company worked alongside recruits from the Barrie area to construct the camp. For this reason, the 157th was the base’s founding battalion and was on site for its official opening on July 11, 1916.

If you have a story to share about today’s featured photographs, please contact museum staff at mshaw@collingwood.ca.