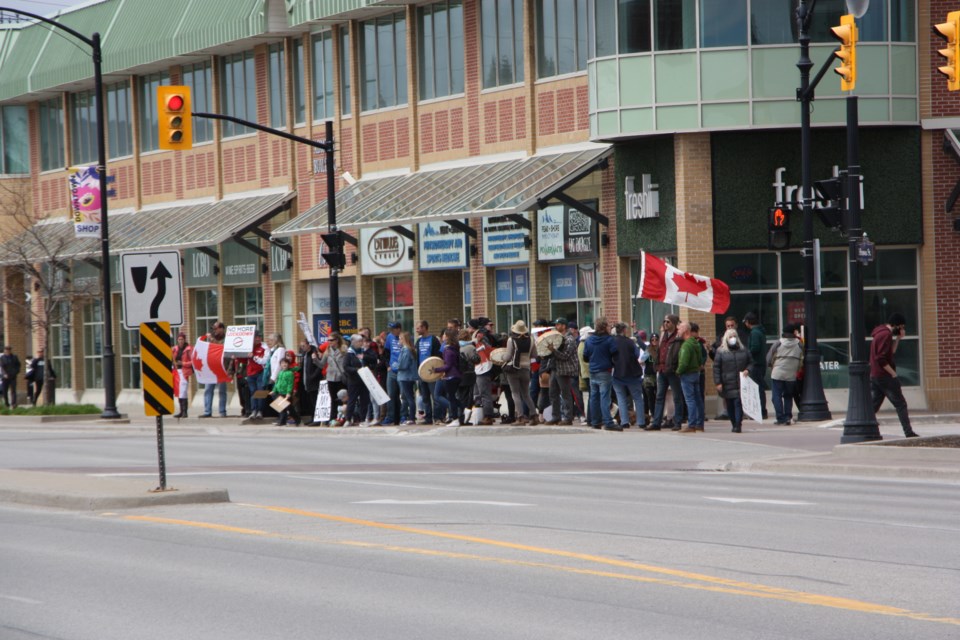 Collingwood and The Blue Mountains OPP have charged two people associated with the anti-mask/anti-lockdown protest on Saturday, May 1.

According to a news release from the OPP, officers were downtown during what organizers called a "freedom rally" while a group of about 75 people gathered at the intersection of First and Hurontario Streets. Later the group marched along Hurontario Street to Fourth Street and back to First.

Police charged two people with failing to comply with an order made during a declared emergency.

"Officers on scene spoke with demonstrators, most of whom were cooperative," stated the news release from Collingwood OPP.

According to the OPP, the fine for failing to comply with an order is $750, and/or $1,000 for preventing others from following an order (this includes individuals, employees, or other workers). Maximum fines are up to $100,000 for individuals and $10 million for a corporation.

In a separate protest event in Barrie, also on Saturday, a Stayner man was arrested by Barrie Police after allegedly attempting to get the crowd to follow him to Meridian Place, which is a park square that was fenced off after several weeks of protests and anti-lockdown gatherings used the square as a home base.

The Stayner man was charged with causing a disturbance and resisting a peace officer.

Under the current stay-at-home order and emergency declaration, all social gatherings (indoor or outdoors) with anyone outside your household are prohibited.

The order also states individuals must stay at least two metres apart from anyone outside their own household at all times and wear a mask when participating in any permitted event such as a wedding, funeral, or religious service, rite or ceremony. Such ceremonies are limited to 10 people indoors or outdoors.

According to the stay-at-home order, each attendee of a gathering can be fined $750 and organizers may be fined a minimum of $10,000.

"Anyone who believes a gathering is not following the law or a business is operating illegally, should report it to their local municipal bylaw enforcement authorities or police service," states the OPP news release.

-With files from Nikki Cole