Collingwood Minor Hockey has committed to dropping the Blackhawks name and logo in favour of one suggested by the community and chosen by local players
Sep 5, 2019 9:44 AM By: Erika Engel 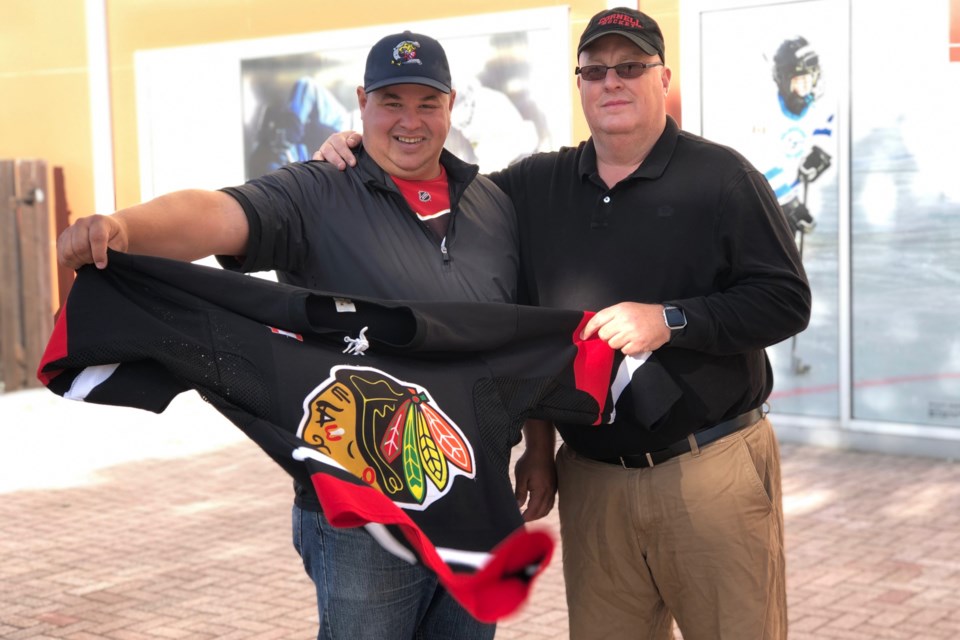 Chris Potts, president of Collingwood Minor Hockey and Bob Robinson, chairperson of the committee responsible for finding a new name and logo for the local minor hockey teams. Old Collingwood Blackhawks jerseys will be for sale at an upcoming charity barbecue by donation with proceeds going to the Campbell House Hospice. Erika Engel/CollingwoodToday

Collingwood’s minor hockey league will be spending the year in search of a new name and logo in time for the 2020/21 season.

Bob Robinson is the chairperson of the committee struck to replace the current Collingwood Blackhawks name and logo, and he said Collingwood Minor Hockey Association (CMHA) will soon be reaching out to Collingwood residents for suggestions for a new team name.

“We’ll be taking suggestions for 60 days, then we’ll take the top six to the board of directors, they’ll pick the top three and the registered and paying players this year will vote for the one they want,” said Robinson, adding it was important to the league's executive and committee the kids playing hockey had a say in their new team name and logo.

This Spring, the CMHA executive voted to change the name and logo of the team.

Robinson and current president Chris Potts said they didn’t receive any specific complaints about it, but they are aware it’s offensive.

Today, the CMHA uses the name Collingwood Blackhawks, and the logo is supposed to depict the face of an Indigenous man. The logo looks the same as the one used by the Chicago Blackhawks.

Recently the Ontario Human Rights Commission (OHRC) reached a settlement with the City of Mississauga and the applicant who brought the case before the tribunal. The city was using the name Mississauga Braves, then Blackhawks, and the same picture logo as Collingwood and Chicago.

“We are aware of this decision and it has sparked new discussion within our board and membership about our association's use of the Blackhawk’s name and logo,” said past CMHA president Craig Hammond, in a letter to council written in April.

The city of Mississauga has agreed to remove banners and trophies with the images and develop a policy on the use of the images in our sports facilities.

According to a City of Mississauga senior media advisor, Catherine Monast, the policy will be done by September 2019.

The OHRC reached out to Collingwood council, and other municipalities, to explain the recent tribunal settlement and to urge Collingwood to engage Indigenous communities in discussions about the use of Indigenous-themed logos and team names in sports arenas.

Robinson said he did reach out to Indigenous communities to consult with them on the logo and he said the Blackhawks name had only negative connotations for the people he talked to.

So the committee will search for a new name and will create a new logo for next season.

“If it is going to offend one person, we want no part of it,” said Robinson.

He said the committee will be looking for any suggestion from the public, but there’s one option he’s not willing to put on the table.

“We will not be the Collingwood Colts,” he said, referring to the name of Collingwood’s Junior A hockey team. “We will continue to be our own organization and we will build a brand that reflects our organization.”

Robinson said the decision to change the logo was unopposed at the executive level.

However, he expects the changeover to be about a $75,000 undertaking once the league purchases home and away jerseys for the 400 players and completes the rebranding in cyber and physical spaces.

“Everybody knows the cost that’s going to follow this,” said Robinson. “Hockey is already expensive and we can’t pass this onto the families.”

He said the league would be doing some fundraising to help subsidize the cost of the logo change, and he called on the Town of Collingwood to help with costs.

“The town did want us to change the logo, so I hope the town supports us in the cost to make that change,” he said.

Collingwood Minor Hockey will be selling old Blackhawks jerseys this year by donation (minimum $5) at a charity barbecue on Sept. 7 from 2 p.m. to 6 p.m. at Central Park Arena.

Hockey and hamburgers to support Campbell House
Aug 29, 2019 8:00 AM
Comments
We welcome your feedback and encourage you to share your thoughts. We ask that you be respectful of others and their points of view, refrain from personal attacks and stay on topic. To learn about our commenting policies and how we moderate, please read our Community Guidelines.