Cry of an Osprey, written by Angie Vancise, is based on the true story of her brother's love and death, and the two people who loved him most
Aug 23, 2019 1:45 PM By: Erika Engel 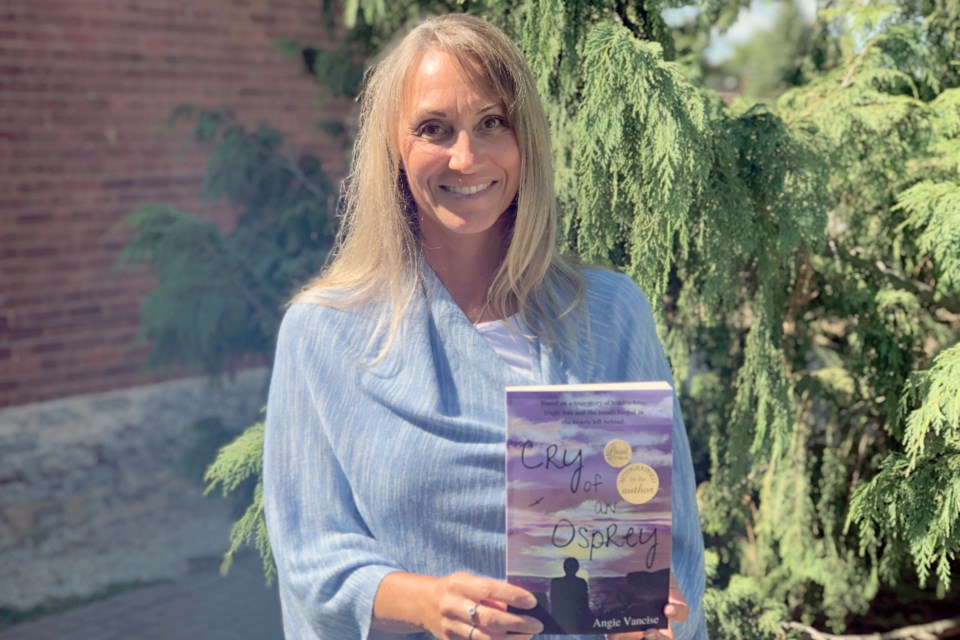 Angie Vancise, a lifetime Collingwood resident, has just released her first novel, based on the true story of her brotherâs death told from the voices of the two people who loved him most. Erika Engel/CollingwoodToday

After losing her entire family - mother, father, and brother - in three years, lightning also struck her home and started a fire.

Angie Vancise was ready to lash out at the universe, but one more message arrived. A medium delivered a message she said was from Vancise’s grandmother: “write that book.”

That book, or rather the desire to write a book at all, was Vancise best-kept secret. Born to an entrepreneur father, she followed his footsteps and went into business ownership with her husband. The two own Pet Valu stores in Barrie.

“Secretly, I always wanted to be an author,” she said. “I thought I was born to be an author, but convincing anybody I wanted to write a book was really scary … then I thought, life is short, what the hell am I waiting for?”

As it turned out, she was the only one who needed convincing. Her husband and daughter were immediately supportive.

Three years later, Vancise is the published author of a novel based on the true story of the love and death of her best friend - her big brother, Dan.

Dan died in 2012. One morning he didn’t wake up, but he was still breathing. He was taken to the hospital where he remained unconscious and on life support for four days before he died. The cause of his death was a stroke. He was 48.

Vancise spent four days in that hospital room with her family and with one other man - her brother’s ex-partner, a gay man raised as a Mennonite.

The book is told in two perspectives: one by Vancise, or Amelia as she is called in the novel, and one by Ben, the name she gave her brother’s former lover.

Most of the story takes place during the four days Vancise spent in the hospital while her brother was dying.

“Through the hospital stay, I witnessed this man devastated by my brother’s death,” said Vancise. “I realized how he felt in the hospital. I thought what a tragic story.”

She said she knew her brother was gay, but only because she had confronted him once about it, and only once they were adults.

“He never really said it. He just said, ‘I’ve had women, and I’ve had men, and I prefer men,’” she said. His partner, Ben, was not openly gay. He had three kids with his ex-wife, and she and his family remain highly and vocally opposed to his homosexuality.

He had been to ‘conversion therapy’ camps as a young person, and had confessed his feelings to his pastor when he was young. His pastor outed him and shamed him in front of the congregation.

“He hated himself, he still does,” said Vancise, who has become close friends with Ben since her brother’s death. “He told me ‘I wish I wasn’t me.’ I can’t believe that at 55 years old he has to go through that.”

Ben and Vancise’ brother Dan (called Jax in the book) dated but had broken up years before. They still kept a relationship for 12 years, dining out together occasionally and remaining friends. Vancise said she thought the two expected to rekindle their romantic relationship eventually.

“When he met [Ben] I had never seen him at so much peace,” said Vancise of her brother. “I have never seen that kind of love anywhere else … secretly, the two had never stopped loving each other.”

When she set out to write her book, she wanted to tell her brother’s story, and she also wanted to show some of the struggles gay people still face.

In the beginning, she didn’t expect to publish it. She just wanted to write the story.

She enrolled in the creative writing certificate program at University of Toronto, where she began what would later become her first novel.

“I found it hard to write about people I know and keep it entertaining,” she said. The book is based on a true story, but she has included some fictional parts

“The characters kind of take off,” she said, adding she would create scenes for her brother and Ben that didn’t happen, but fit their love. “It was my hurt for Jax and Ben that created it for them.”

She worked with the real-life Ben to create some of the scenes and gather his memories of the time he spent with her brother.

She remembers asking over and over again if he was truly okay with his life and love becoming so public.

He told her if it helped others, he was okay with it.

Her motive matched his.

“I really want it to help people,” she said. “People are reaching out about aspects of the book I didn’t realize would touch people, but they have.”

Another sign, though not as destructive as a lightning bolt, gave Vancise one more idea: the book’s title, which sort of fell from the sky.

Vancise was looking into the symbolism of an Osprey in Indigenous beliefs and had written an assignment based on what she had learned. She said the Osprey’s symbolism is the essence of her brother’s story.

Immediately after submitting her assignment, she went on a trip to Mexico where an Osprey flew overhead on its way to catch a fish. She’s called her book Cry of an Osprey.

Vancise has grown up in Collingwood, so the book is set locally, featuring Collingwood, The Blue Mountains, and even Tobermory.

She has found her stride as a writer, and is planning two more books – a mystery and a memoir.

“I love writing,” she said. “I feel like I’ve really come into myself.”

You can buy Cry of an Osprey at Read it Again bookstore in Collingwood or online through her website here.