David Wilding-Davies’ self-published book, My Cattle Look Thin, is up for a Whistler Independent Book Award
0
Jun 7, 2019 8:30 AM By: Jessica Owen 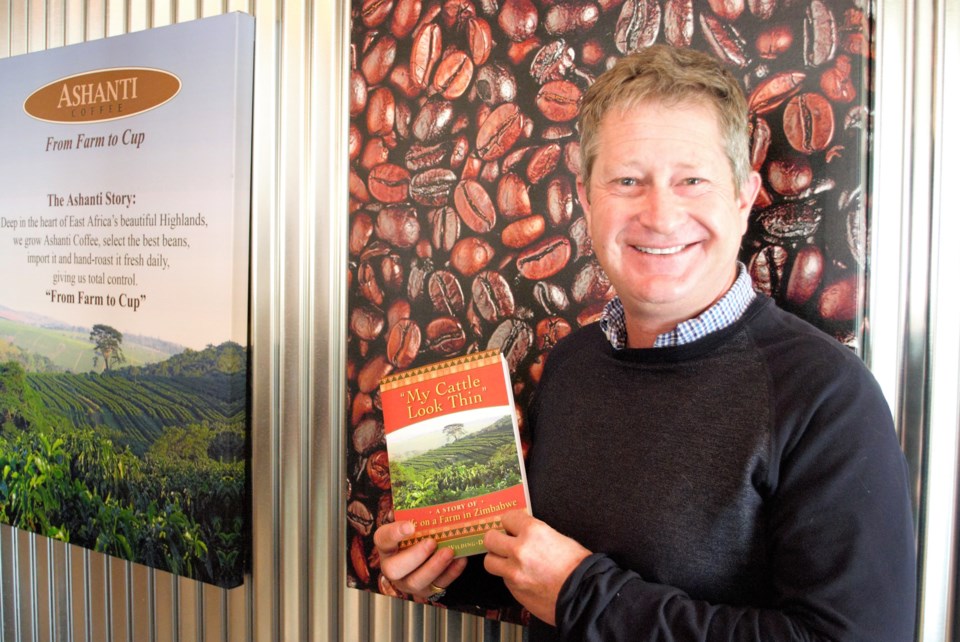 A local coffee connoisseur is making waves in the literary community.

David Wilding-Davies’ self-published book, My Cattle Look Thin, recently made the non-fiction short list for a Whistler Independent Book Award. The novel outlines the trials and tribulations life dealt the rookie farmer throughout the seven years he lived in Zimbabwe tending to a coffee farm – called Ashanti Estate – weaving a personal memoir with snippets of the history of Zimbabwe’s government structure to provide context.

When the local coffee roastery owner found out this week that he made the shortlist for the national award, he says he was stunned.

“I nearly fell off my chair,” said Wilding-Davies, with a laugh. “The email started with outlining how many entries they receive, and the standards are so high. I almost didn’t bother scrolling down to see if I made it.”

My Cattle Look Thin is one of seven books short-listed in the non-fiction category.

“It was such a nice feeling because... it’s a nice affirmation when a panel of jurists who are recognized in their field approve of your book,” he said.

Wilding-Davies moved to Zimbabwe with his young family in 1998 with plans to run his own farm there.

“I’d always dreamed of being a farmer, and it was a good opportunity,” said Wilding-Davies. “I had a house in Kimberley. We sold the house, and I moved out with my wife and our infant son and we bought a farm.”

While the Collingwood author grew up on a small hobby farm in B.C., he says he didn’t have experience farming a major crop before making the move. Most of what he learned about farming, he learned from the local workforce who helped maintain the crops in Zimbabwe.

“They had been there for generations, so they were very helpful,” he said. “(Farming) gave me a feeling of doing something meaningful that was benefiting more than just myself.”

Wilding-Davies says about 250 families lived on the farm.

“Toward the end, it began to unravel, and when it unravelled it happened very quickly and very sadly. It really was just raw, African politics,” he said. “We ultimately ended up losing our farm, very illegally and very violently.”

Wilding-Davies and his family left Zimbabwe and came back to Canada, settling in the Collingwood area in November 2005. But the thoughts of what had happened at his farm haunted him.

“It’s something I felt very strongly about,” he said. “It was very topical in the news, but often the news didn’t really give the full history or background of what was happening.”

This inspired Wilding-Davies to write the book.

“I tried to give a more informed and broad viewpoint,” he said. “It was a huge upheaval and very sad for a lot of people.”

Wilding-Davies opted to bring the Ashanti name to the Collingwood area when he came back to Canada. There are currently four coffee-shop locations that share the name in Collingwood, Thornbury, Port Elgin and Hanover. Although he doesn't have access to the original Ashanti Estate farm, he has a partnership arrangement with a remaining farmer (and friend) in Zimbabwe to sell him the coffee for the Ashanti brand.

The Ashanti name comes from the name of the farm in Zimbabwe.

According to Wilding-Davies, the original farmer who grew coffee on the farm was a British planter in India. When India became independent in 1948, he didn’t want to return to England, but he wanted to stay within the British empire, so he came to Zimbabwe to start his farm.

“Shanti means peace in Hindi. So it means, A Peaceful Estate,” said Wilding-Davies.

The finalists for the award with be announced July 16 with the winners being crowned at the Whistler Writers Festival in October.

Collingwood Judicial Inquiry report on track for summer release
May 25, 2020 5:00 PM
Comments
We welcome your feedback and encourage you to share your thoughts. We ask that you be respectful of others and their points of view, refrain from personal attacks and stay on topic. To learn about our commenting policies and how we moderate, please read our Community Guidelines.

Theatre Collingwood - Putting More PLAY in Your Life for 36 years!

No Payments For Six Months