'The portions about an RFP had been removed and it had become sole-sourced. And that’s really what shocked me,' said Marjory Leonard, town's treasurer
Oct 17, 2019 2:45 PM By: Erika Engel 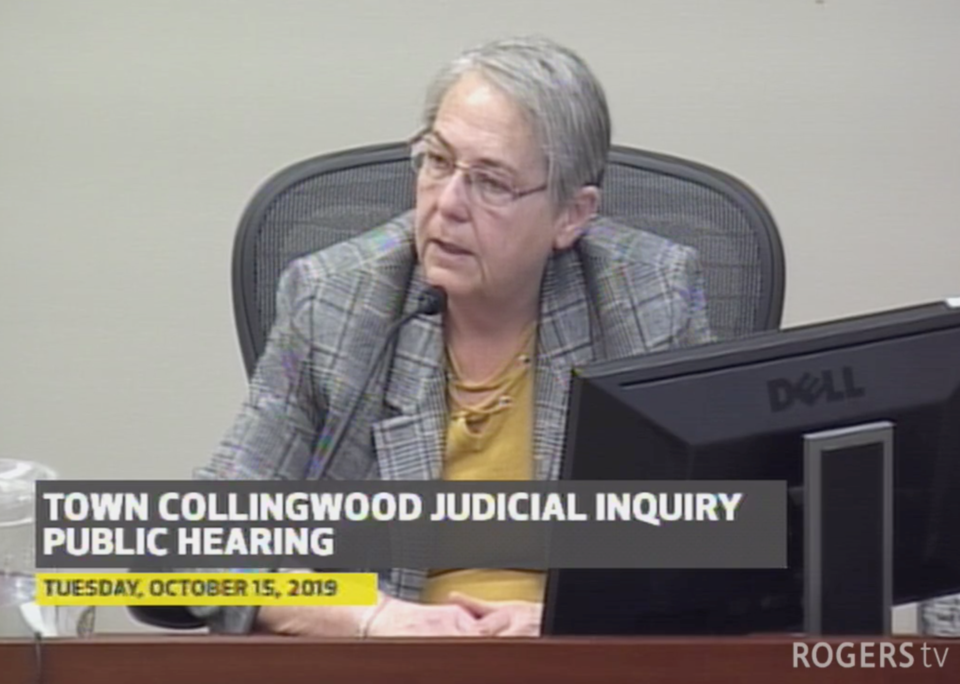 Marjory Leonard, treasurer for Collingwood, on the witness stand at the Collingwood Judicial Inquiry.

The town’s treasurer told the Collingwood Judicial Inquiry she was stunned when her report was changed without her knowledge or input and was used to recommend not only fabric buildings for a new pool and arena, but suggested a competitive bid process was unnecessary.

A large portion of the questions directed to Collingwood’s treasurer, Marjory Leonard, while she was on the witness stand were focused on a staff report that, through multiple revisions from various senior staff and the deputy mayor, went from providing information about two building types and asking council for direction to recommending the town proceed with a Sprung structure and a sole-source contract.

The staff report went to Collingwood council on Aug. 27, 2012, and council approved the recommendations to purchase an “Insulated Architectural Membrane” (caps included in report).

From there, the town contracted BLT Construction to build Sprung structures for both the arena at Central Park and the Centennial Aquatic Centre at Heritage Park on a sole source contract, meaning there would not be a competitive bid process for the buildings.

The purchase and construction of those two buildings is the focus of the current, second phase of the Collingwood Judicial Inquiry, which is investigating the allocation of proceeds from the 2012 share sale of Collus.

On July 16, 2012, council voted to pursue a single pad arena that could be phased into a double pad, and to enclose the existing outdoor pool at Heritage Park with a fabric building. Council asked staff to report back by Aug. 27, 2012, with options.

She said it didn’t make sense to her that she was asked to write it, but considered it an “other duty as assigned,” and accepted the task.

She said she felt pressure to get the report done quickly, but did not feel it was enough time to properly investigate information contained in the report.

“There was a lot of information there,” testified Leonard. “I didn’t have the time to vet the numbers that I did receive … the time constraint was just unbelievable.”

Leonard said it was her opinion the report should include “full information” for council to make a decision on which direction it wanted to go, considering options for a bricks-and-mortar building, a pre-engineered steel building, or a fabric building for the arena.

Throughout her testimony, Leonard maintained she didn’t intend for the report to recommend sole sourcing, nor did she want to recommend a certain building type. Instead, she wanted those decisions and directions to come from council.

Early versions of her report recommended proceeding to a competitive bid process once council decided what type of building it wanted to use.

She sent early drafts of the report to a few town staff including Houghton, and David McNalty, the purchasing manager. Houghton asked her to send the draft to the deputy mayor at the time, Rick Lloyd.

“I told him that I was not really happy,” said Leonard, adding the report wasn’t yet complete.

Inquiry documents show Lloyd did get the draft report from Houghton and later from Leonard.

He responded to Houghton with recommendations for changes, asking the acting CAO to add a “positive spin” to the fabric membrane option.

Leonard said she considered that a “direction” given by Lloyd.

She said she did not raise any of her concerns at the time.

“I believed that the purchasing manager and the CAO were in charge of the process, and were the ones who were dealing with the way things were going to go, and talking about that, my concerns would have just been wasted air.”

Inquiry documents show Leonard did send an email to McNalty, and copied the executive management committee, including Houghton, to say she thought the town had “done its due diligence for procurement purposes” and mentioned a few Sprung attributes suggesting “nobody else can prove they have done this type of construction without collapse.”

Leonard testified this email was sent after she received a call from Houghton “convincing” her to put the information into an email and send it to McNalty.

“The impression I had then and the impression I still have now is that I was being told that we had done all this and you should tell people,” said Leonard.

On Aug. 24, Leonard reviewed an updated version of her report - sent by Houghton - with the following changes:

Prior references to a competitive bid process or a request for council to choose a direction to pursue were removed. There was no mention of a bricks-and-mortar option in the report that went to council.

“I was stunned,” said Leonard. “The portions about an RFP had been removed and it had become sole-sourced. And that’s really what shocked me. Not only sole-sourced, but … then the arena was now totally a fabric building as opposed to having council decide what they wanted in terms of pre-engineered or bricks-and-mortar or a fabric structure.”

She said Houghton explained the rationale behind the recommendations in the staff report during a meeting with senior staff involved in the project.

“I can’t remember … word-for-word, but it was on the basis of the fact that the original $35 million was an unacceptable amount,” said Leonard. “These two facilities would answer the water and ice needs of the community for years to come, they were affordable, and items along those lines.”

The $35 million project Leonard cited was a reference to a report by the Central Park Steering Committee for a large, multi-use recreation facility and the redevelopment of Central Park.

Leonard said she didn’t raise her concerns at the time, but suggested that she should have.

On Aug. 27, Leonard along with Houghton presented the staff report recommending a fabric building for both the pool and the arena.

Inquiry Counsel Kate McGrann asked Leonard if she felt there would be an advantage to the town if there was a tender process.

“Without having gone through the process, I can’t answer whether or not it would have been an advantage for us to do it,” said Leonard. “It would have provided some comparative numbers for certain and comparative solutions.”

McGrann also asked Leonard what she knew about why her original report wording suggesting council provide direction on which option to pursue, was deleted.

She said she had no memory of why it was taken out. Associate Chief Justice Frank Marrocco, the judge presiding over the inquiry, asked her to answer the question with the benefit of hindsight.

“There were a lot of other players in the game that I didn’t know about,” she said.

Toward the end of her testimony, Leonard also said she was surprised to learn, through the inquiry, the price quoted by BLT to the town for the two buildings was not negotiated.

She said she would have expected staff to negotiate the price.

Inquiry documents show BLT Construction paid Green Leaf Consulting $756,725.42 after securing the contract to build the arena and pool to the town. The payment was sent after BLT received its first payment from the town, and the fee, according to BLT, came from their profits.

Earlier testimony and documents reveal Green Leaf, a company owned by Paul Bonwick, was paid consulting fees for helping BLT get the contract with the town.

Leonard said she learned Green Leaf received the payment after reading a CBC article published in 2018.

“I was gobsmacked, actually … astounded, sickened,” she said.

Bonwick asked his own questions of Leonard in cross-examination.

He said the contract for consulting fees was between two private companies, and didn’t impact the price the town paid. He said he was confused about why Leonard would “take exception” to the consulting fees paid to his company.

“I would take exception because it leaves no room for the town to negotiate with BLT,” said Leonard, adding the profit margins for BLT were “squeezed” because of Green Leaf’s consulting fees. “I understand negotiations didn’t take place, but there could have been an opportunity to negotiate prices with BLT.”

You can watch the inquiry hearings live on Rogers TV, online here, or in person at the town hall council chambers. You’ll find a hearing schedule here.

Inquiry documents show former deputy mayor altering staff report for 'positive spin'
Sep 16, 2019 1:30 PM
Comments
We welcome your feedback and encourage you to share your thoughts. We ask that you be respectful of others and their points of view, refrain from personal attacks and stay on topic. To learn about our commenting policies and how we moderate, please read our Community Guidelines.