Town Clerk Sara Almas took the witness stand September 12 to talk about the staff reports and conversations that led to arena and pool construction
0
Sep 16, 2019 1:30 PM By: Erika Engel 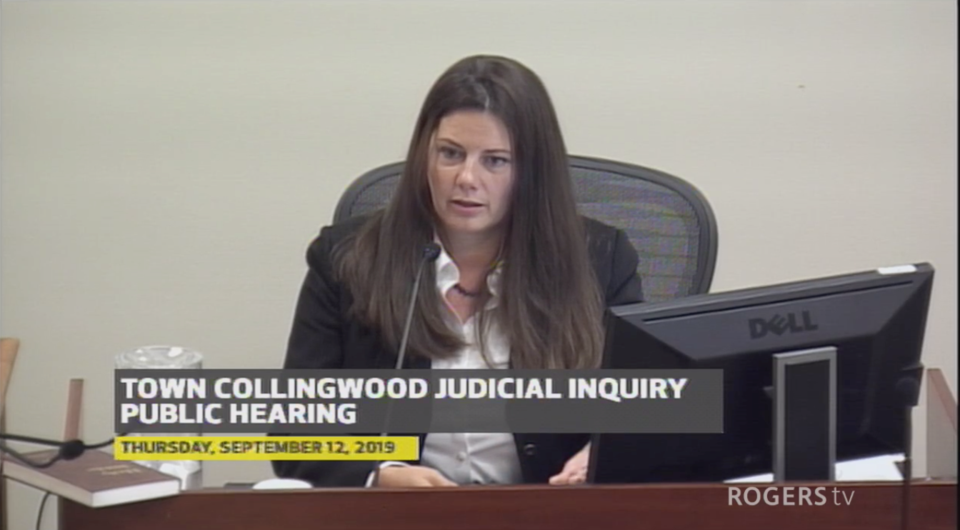 Clerk Sara Almas on the witness stand at the Collingwood Judicial Inquiry on Sept. 12, 2019. Contributed photo

Do the ends justify the means?

That was the question raised during the Collingwood judicial inquiry on Thursday (Sept. 12) with the town’s clerk, Sara Almas on the stand.

During examination by the inquiry’s counsel, Justice Frank Marrocco interjected with a question of his own: “How do you react to the suggestion or the thought that it doesn’t matter about the process, as long as the building’s okay?”

Almas responded with a question of her own.

“If you make a decision and you haven’t followed the appropriate steps, then is that decision really credible?” she asked. “Rules are put in place for a reason. That reason is to instil public trust in process, to make sure that appropriate protocol is followed, to ensure that diligence is taken correctly because you’re spending taxpayers’ money … there needs to be some justification on how you get to make the final decision.”

Almas was on the witness stand Sept. 12 during the public hearings for the second phase of the judicial inquiry. This part of the inquiry is focused on the decisions and transactions that led the town to build two recreation facilities with the proceeds from the 2012 Collus share sale.

Some of the questions surrounding the facilities are focused on the sole-source procurement of the fabric membranes and the contractor to install them and complete further site works. Other questions are centred on the process followed for council to decide to go with the dome structures over other ideas.

Almas provided a written affidavit to the inquiry in addition to taking the witness stand for cross-examination.

She said the first time she heard council might stray from a recommendation by the Central Park Steering Committee was when she received an email written by then-deputy mayor Rick Lloyd forwarded to her by the town’s acting CAO Ed Houghton.

The email from Lloyd asked Houghton to “get a price” for a fabric cover for the outdoor pool at Heritage Park and the outdoor rink at Central Park.

On July 16, 2012, council voted to pursue a single pad arena that could be phased into a double pad, and to enclose the existing outdoor pool at Heritage Park with a fabric building.

“I do not recall the source of those options,” said Almas. “I do not recall any information about fabric-covered pools being distributed to council in advance of the meeting.”

Almas also testified council asked for a rush on both the pool and arena buildings, asking staff to bring back a report with costs by July 30. The deadline was extended to Aug. 27.

“The early drafts of the Aug. 27 staff report I received contemplated there would be an RFP,” said Almas. An RFP is a request for proposal process that uses competitive bidding to select a contractor.

Inquiry documents show a draft of the report prepared by Treasurer Leonard contemplated proceeding with a competitive procurement process.

Email records show Houghton sent a draft of that report to Lloyd. The former deputy-mayor responded stating the phrase “if council chooses to proceed” should be removed as “it leaves the impression that maybe we shouldn’t proceed.”

In a later email, Lloyd tells Houghton he finds Leonard’s there’s “negative spin” in some of Leonard’s reports and this report “needs the Ed Houghton positive spin.” Lloyd also comments “we must be careful not to give too much information.”

A new version of the report circulated to Almas at 11:45 p.m. on Aug. 23 did not mention proceeding with a competitive process.

Council ultimately decided to sole-source the buildings by hiring BLT Construction to build and install the Sprung-made structures.

Almas testified she was not aware Lloyd received an early copy of the report, and said it was “not good practice” for a member of council to receive an early draft of a staff report.

She had seen Lloyd copied on other emails regarding the recreation facilities, including the June correspondence where Lloyd tells Houghton to get estimates on a fabric membrane.

Almas said a single member of council should not be giving any direction to staff, that it should instead come from council as a whole.

“In hindsight, I should have asked the question why was he being so intimately involved in this conversation,” said Almas. “Why did he have so much interest in rec facilities?”

Almas said his response indicated to her he was “trying to influence how a report is written.”

Justice Marrocco asked if redrafting the report made it more persuasive for one way over another.

“Do I think that, if the deputy mayor hadn’t looked at it, that the report would be a different report? Absolutely,” said Almas.

The final point in Almas’ affidavit pertained to the public process undertaken by the town to receive input on how to spend the share sale proceeds.

Almas stated she was responsible for overseeing the process on the use of the proceeds. She said council distributed a public survey for the use of the funds and the top three responses “related to redeveloping Hume Street, enhancements for the harbour, and decreasing the town’s debt.”

However, on June 10, 2013, council voted to allocate the Collus funds toward the Central Park Arena and Centennial Pool redevelopment. They waived the procedural requirement for advanced notice of the motion and instead put forward the idea and passed it in one meeting.

The inquiry continues with public hearings resuming Monday, Sept. 23 at 10 a.m. in the town hall council chambers. You can attend in-person, watch them live on RogersTV, or stream the hearings live online here.

Inquiry turns eye to $750K consulting fees for Bonwick's company
Sep 12, 2019 1:57 PM
Comments
We welcome your feedback and encourage you to share your thoughts. We ask that you be respectful of others and their points of view, refrain from personal attacks and stay on topic. To learn about our commenting policies and how we moderate, please read our Community Guidelines.