This Collingwood couple sold their local homes to live in an 80-square foot van, and they don't miss the extra indoor space.
Mar 30, 2019 1:45 PM By: Erika Engel 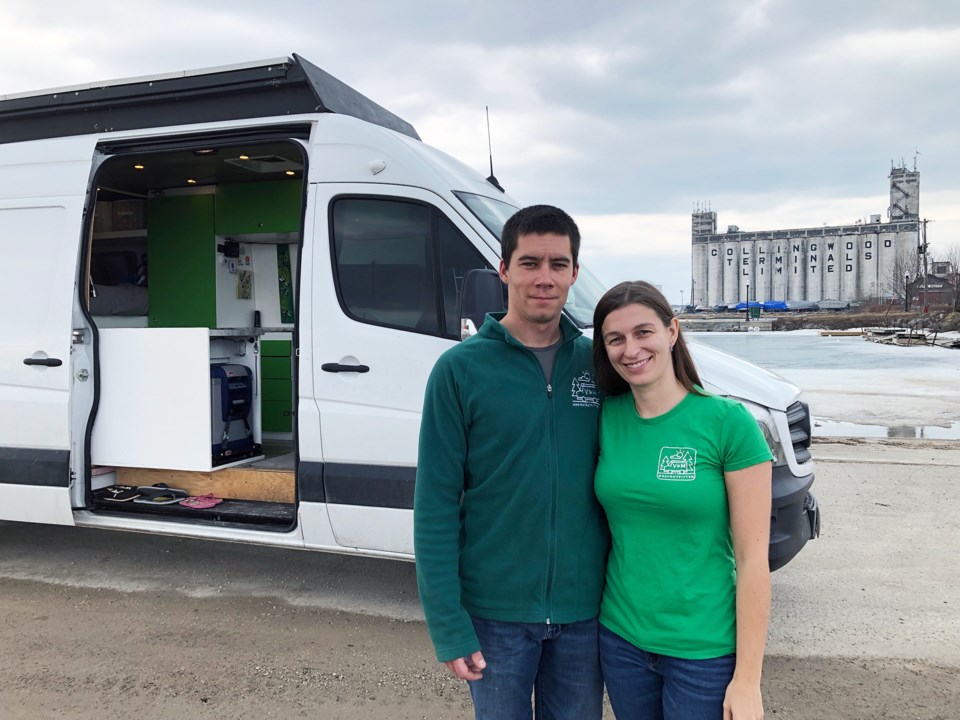 After a year on the road with a house on wheels, a Collingwood couple has embraced the life of a working nomad and joined a community of self-proclaimed “Van-ers.”

Madison McNair and Raynor Vickers were married in 2017, and built an 80-square-foot home in a Mercedes Sprinter van at the beginning of 2018 when they set out on their maiden voyage.

They’ve been travelling ever since and have now sold their homes in the Collingwood area, exchanging concrete foundations for rubber on road and an off-grid life.

In the last 13 months the couple has travelled 70,000 kilometres to places such as the Florida Keys, San Diego and Vancouver. They’re spending some time in Collingwood currently, and this summer they’re looking at eastern Canadian destinations. They skied on the Rocky Mountains, and spent time in Oregon where a record snowfall made for a doozy of a winter.

They travelled through Texas during the US government shutdown, and camped in a Texas state park on the Rio Grande. Across the river they could see a Mexican state and national park while the chatter on the radio talked of border walls between the two countries.

“That gave an interesting perspective to all of the political excitement,” said McNair.

The biggest surprise on their trip this year was, according to McNair, the Louisiana beaches and the Southern charm of the locals they met.

“It’s been an entire year of getting to fulfill dreams,” said McNair. “Some we knew of and some we discovered.”

Van life has inspired a new line of work for the couple. Vickers has a background as a vehicle and marine mechanic, and McNair’s background is in marketing. They’re combining their work and life passion to form Ray Outfitted, a company that will specialize in helping people create and customize their homes on wheels.

“The market has grown so fast in the past year,” said Vickers, adding the technology is also improving including better batteries for storing solar power and more affordable solar panel technology.

“The RV industry is seeing double digit growth … for the first time, there are two generations buying RVs, the boomers looking for retirement recreation, and millenials looking for an affordable home,” said McNair. “We want to build a life you don’t need a vacation from.”

While the couple is looking for commercial shop space for Ray Outfitted, they will also be maintaining a mobile workshop in a trailer they can tow with their Sprinter.

“We’re analog nomads instead of digital nomads … we gather parts and come to you to do the work,” said McNair.

For her marketing work, she said living in a van has enabled her to take temporary contracts and relocate for a short time where necessary.

“In this gig economy, that flexibility is appealing,” she said.

Along their travels McNair and Vickers met several fellow Van-ers who have chosen the life for various reasons, and come from different situations.

There are those who are facing eviction from an apartment and they buy the first van they can afford. They will often park in carpool lots or make arrangements with their employers. Their tiny home doesn’t have to be on wheels, but it makes it easier to find a legal location for it. Instead of couch surfing, Van-ers will driveway surf.

In other cases, there are people looking to spend $500,000 on a home on wheels, they’re searching for the freedom it offers from things like mortgages and heavy work loads.

“We’ve met all kinds, from someone who’s never had money and figured out how to live without it, to someone who’s leaving Bay Street,” said McNair. “It’s an interesting trend.”

The trend is creating new growing pains in cities where the Van-er population is exploding. In San Diego, lawmakers are struggling with calls to ban people from living in vehicles.

“The community of people travelling have a little growing up to do,” she said, adding it’s important for Van-ers and the like to be self-contained and respectful of the space they’re using in order to help present van life as a viable option.

She suggested one solution is to create spaces for tiny home communities, whether those homes are on wheels or foundations. Many RV parks in Canada are closed for part of the year, and those parks have very small lots with people packed close together.

For the most part, Van-ers are interested in open spaces and outdoors, so McNair’s ideal tiny home community would be a little more spread out than a traditional RV park.

“Canada has some changes to make. There’s a gap in permits available [for tiny homes] and I expect that’s going to change,” she said. “We’re at a place where Blue Mountain can’t find enough staff and minimum wage jobs don’t allow you to live in Collingwood.”

Home on wheels might be a solution for high price of housing say Collingwood Van-ers
Mar 30, 2019 1:45 PM
Comments