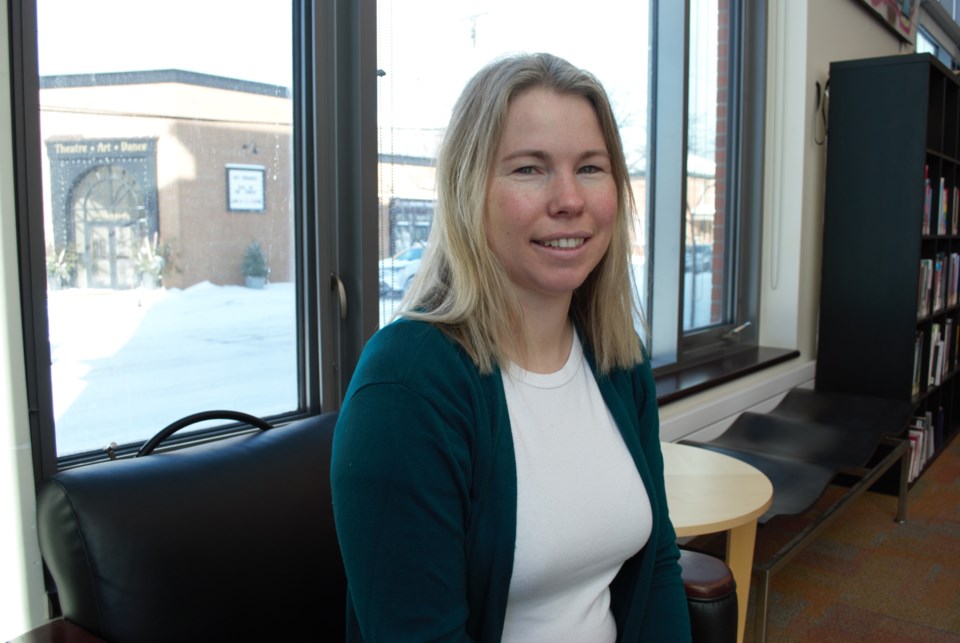 Leanne Morrison is a local entrepreneur who is organizing a clothing swap at the Collingwood Public Library on May 4. Jessica Owen/CollingwoodToday

An unexpected chain of events led to a local woman leaving one life behind and starting anew.

For this week’s edition of People of Collingwood we sat down with Leanne Morrison, 38, a local entrepreneur who is using her organizational skills to help others by planning clothing swaps at the Collingwood Public Library.

A: I grew up in Pickering. Then, I lived in Ajax. Then I travelled around the world for a couple of years.

Q: What made you want to do that?

A: I was going through a separation/divorce, and I had read the book Eat, Pray, Love. (laughs)

It came out around the same time, back in 2008. I ended up leaving my job; I was working at Honda Finance. I travelled for a couple of years.

Q: What did you learn? Did you learn things (through that experience)?

I learned that Canada is a massive country. It’s geographically so diverse. I was on the very east and west parts. I was out in Haida Gwaii (in B.C.) and then also out of Newfoundland, and a bunch of places in between. I went to the Calgary Stampede, I learned how to surf. I worked on a lot of organic farms.

Q: What kinds of things did you learn about yourself when you did that?

A: After a separation or divorce, it’s a big life change. I learned that I could really depend on myself and have a lot of new experiences and see life outside of the Durham region. (laughs)

Q: When you came back, what chain of events led to you settling down in Collingwood?

A: When I came back, I worked on an organic farm out of Prince Edward County for one season. But then, I had a really strong feeling I wanted to leave the farm a bit early. My sister was living in Wasaga Beach. She had just bought a house there. She was a French teacher at Admiral (Collingwood Elementary School) here in town.

So I had a really strong feeling I wanted to spend some time with her, so I moved up here with her.

Then, I got a job in Toronto in the Bay Street financial area. Around the same time, my sister was diagnosed with leukemia.

The timing worked out really well because she was at Princess Margaret (Cancer Centre), which was a couple of streets over (from where I was working).

I spent a lot of time with her.

When it became terminal for her, I ended up quitting my job. We got to spend a lot of time together. She was in the hospital from January of that year until she passed away in June.

Afterwards, I moved up to her house in Wasaga Beach. That was in 2013. That’s how I ended up here.

Q: What are you doing now up here?

A: I started a business up here in 2014 through the BERN program (Business Enterprise Resource Network). It doesn’t exist anymore. Last year, I switched businesses and started a new business.

It’s called Clear My Clutter. I help people downsize, declutter and get ready for moving.

The common theme, if you think about it, is when I was travelling for the two years, I was doing it on a really low budget, trying to find ways to really stretch money while having really nice experiences.

Even before that, I really liked second-hand shopping.

Helping people organize and declutter, I see all the things that people are letting go of. I also see a lot of people who are looking for things.

Q: A lot of times, when people hold onto things, there’s an emotional component. Could you speak to that? Is that something you’ve experienced in your business?

Q: You are running a clothing swap at the library on May 4. You ran one in the fall as well. What made you want to lend your talents toward an event like this?

I love second-hand stuff. I love trying to find ways to save money.

For the clothing swap, it’s a way for people to come, let go of things like clothes, purses, jackets or shoes that they’re not using anymore, and then people can come and get stuff for free. There’s that synergy. It helps people that are really low income, or people who are higher income but are just looking for new things. It’s part of a new trend: the sharing economy. Instead of everyone owning everything and having a lot of stuff, you can spend less money, own less stuff, but still have a good experience.

The first one we had was in September. We had about 300 people come. We raised $600 for Home Horizons. People can come and take stuff for free, but if people want to make a donation, they can.

The one coming up, we’re going to be raising money for Breaking Down Barriers.

Q: What made you want to support that cause specifically?

A: Each time (I do the swap), I’d like to support a different charity in town, and kind of rotate it through different organizations that can benefit from the money.

Q: How does the event work? Do people bring clothes on the day, or bring them in advance?

A: We’re going to have a spot (at the library) where we’re have a giant box so people can drop clothes off on the Wednesday, Thursday or Friday prior to the swap. We’ll set it up on the third floor on the Saturday.

Q: What are your hopes for turnout?

A: I just love swaps, so it’s just a lot of fun. At the last one there was a line up to get in. This time, we’ll have more space so we’re hoping to spread out. (The May 4 swap will fill the entire third floor of the library)

A: It’s hard to see five or 10 years out because everything always seems to change. But, I’m getting married in June. I’d like to buy a house and grow my business.