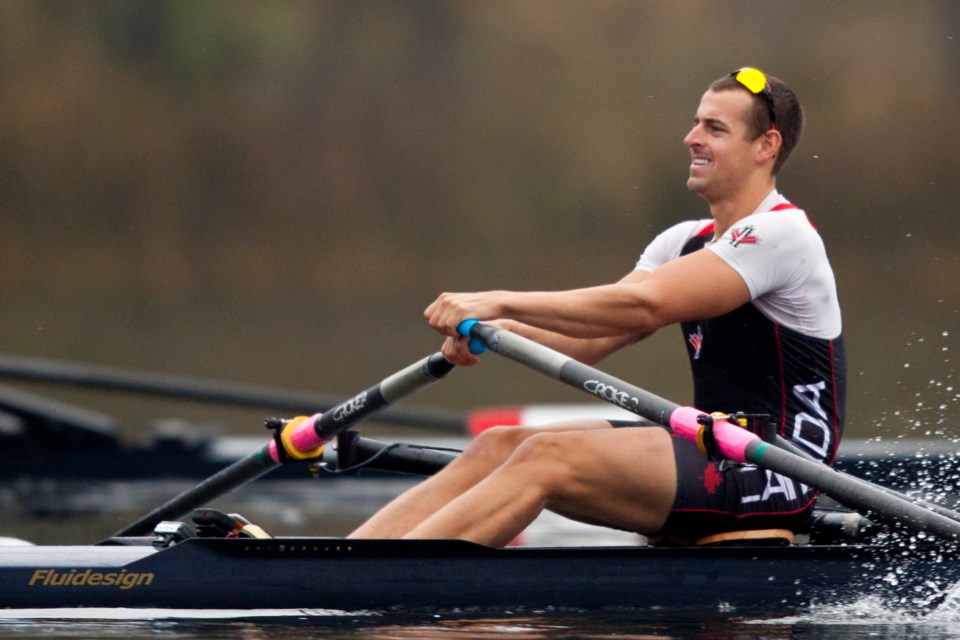 Matt Buie was dedicated to several sports while at CCI, and discovered a passion and talent for rowing while at Ryerson University. Contributed photo

Once Matthew Buie dipped his oar in the water, he never looked back.

For this week’s edition of People of Collingwood we sat down with Buie, 31, who competed at the National Rowing championships in November coming in first in the open men's single, making him the fastest rower in Canada currently.

Q: What is your background? Where did you grow up and go to school?

A: I grew up in Duntroon. I went to Duntroon Elementary School which is now closed.

Then, I went to CCI. (Editor’s note: Buie was inducted last year into the Collingwood Collegiate Institute Black and Gold Society)

I started rowing in third year of university at Ryerson.

Q: What made you want to start with that sport specifically?

A: I joined the Canadian Armed Forces reserves between second and third year with the Queen’s Own Rifles of Canada. I wanted a way to stay in shape to keep my fitness up with the army.

I joined the rowing team that fall.

Q: You’ve had a lot of successes. Can you go over the successes you’ve had since?

A: In 2009, I won my first medal at the Canadian Henley (Regatta), it’s kind of like the club national championships.

My first international event was in 2010 at the World University Games in Hungary.

I’ve raced in every national championship from 2009 to 2018 except in 2016 after I was a spare at the Summer Olympics. We had a fall off (after that).

Q: You were part of the 2016 Summer Olympics team in Rio de Janeiro. What was that like?

A: I was part of the team. I didn’t race, I was the spare. I still technically got to do a race. They actually had a regatta the day before the rowing starts with all the spares. It’s pretty much a dry run to make sure all the systems are working. After that, it was just training in the mornings to keep myself in shape just in case one of the guys went down with an injury. Luckily, none of the guys went down.

Q: You’re living in Victoria B.C. now. What made you want to make the move out west?

A: In 2012, I went to the English Henley Regatta in England as part of the national development team. I got second place, and was invited to train at the National Training Centre in B.C., and started there in January 2013.

I’ve lived in Victoria since then.

Q: Do you ever see yourself moving back to this area?

A: Absolutely. My plans (right now) are all tied to rowing. But my family’s around Collingwood. My mom, dad, sister and three nieces are there. I only get to see them once or twice a year.

Q: How long does a rowing career typically last?

A: It varies from person to person. Because it is a low-impact sport, generally the older you get, the more years in, the better you start doing. It’s low-twitch muscle fibres. It’s not like sprinting where the younger you are, the faster your legs are working. It’s the opposite for rowing.

Some people’s careers are four years, and other people’s are 20 years.

Q: What do you foresee for yourself? Do you see yourself rowing for 20 years?

A: I look year to year. I wanted to push my way to the 2016 Olympics, and then after that, year to year. If I’m at the top of the team and I can make it to the World Championships, I’ll just keep going, as long as I’m near the top.

We have 21-year-olds coming up, so I’d like to just keep going while I’m still up there (in the rankings).

Q: Since you grew up in the Collingwood area, do you attribute any of your success to your upbringing here?

A: Whatever person you are is a direct result of how you were brought up. I did cross-country running and cross-country skiing and all different sports on my high school team. All those coaches helped to push me farther. I played 10 years of hockey. I was constantly working on commitment, sticking at it, and pushing forward.

All that stuff pushes you toward a national level in any sport.

Q: What’s next for you? What are your career goals going forward?

A: We’re going to the World Championships this year. They’re at the end of August. That is a big one for us because it qualifies the boat for the (2020) Olympics. You need the boat qualified to go. That’s the goal for us this year. We’d have to get in the top nine.

The goal for the next year after that would be to make the boat again.

It’s not like a soccer team or a hockey team where you have try-outs and that’s the team. Everyday we’re racing against each other, and if you start slowing down, you’re out of the boat.

Rowing is a sport to the max. You (usually) only have the energy for one event.