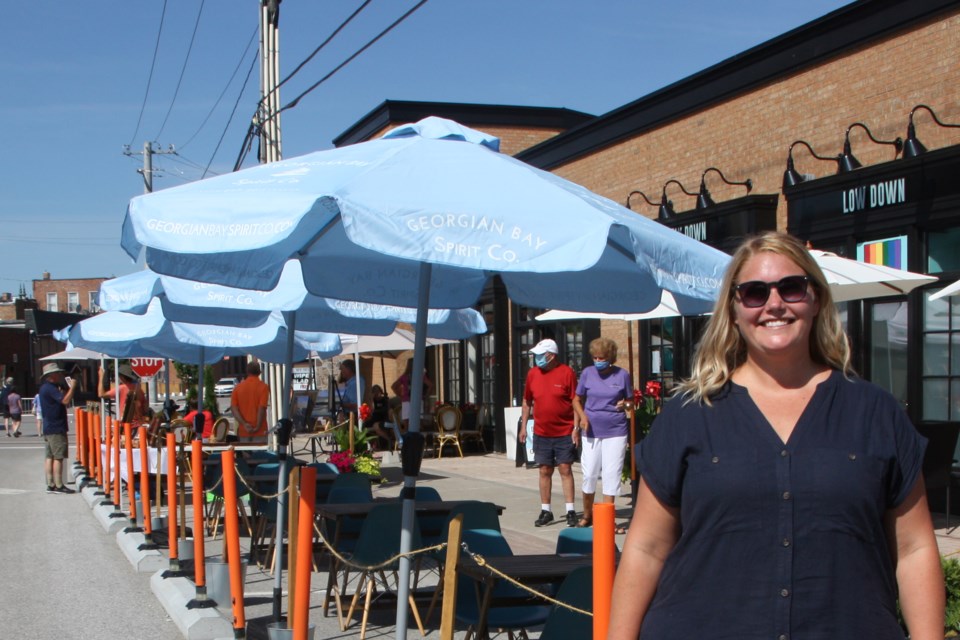 Cassie MacKell, co-owner of Low Down, has opened an expanded patio for diners. Erika Engel/CollingwoodToday

Collingwood restaurateurs are glad to see the latest set of rules from the Ontario government requiring them and other bars and restaurants to keep a log of their customers.

The latest regulations were released yesterday and included additional measures for restaurants, bars, and other food or drink establishments. Chief among the changes was a requirement to keep a log of customer names and contact information for 30 days. The log would be presented to the local medical officer of health in the event they were needed for contact tracing due to a COVID-19 case.

Cassie MacKell, owner of Low Down on Simcoe Street, said she’s been keeping a log since since she opened her patio for Stage 2 of the provincial reopening plan.

“It was already a recommendation from the Simcoe Muskoka District Health Unit,” she said. “We’ve been doing it for over a month.”

At Low Down, once customers are seated, they receive a paper asking for their names, the date and time, and a phone number for contacting them. Those records are kept in envelopes designated for each date and stored in case they are needed in the future.

At first, she noted customers were confused and a little concerned about why they had to provide the information.

“We would just tell people it’s for your own safety,” said MacKell, adding she and her staff would explain the contact information would only be used if there was a known case of COVID that passed through the restaurant.

The information would be passed on to the health unit for contact tracing, if requested.

She said more recently people seem OK with providing the information, and she attributes that to more restaurants keeping logs and customers being “trained” to expect it.

“It’s no different than calling and leaving your number for a reservation,” said MacKell. “We’re not keeping the information to contact people at a later date other than for COVID-19 … It’s good for us and good for the customers.”

MacKell opened Low Down in September. Before COVID she could seat 20 people on the patio and 30 people indoors. Thanks to a town initiative, she was able to expand her patio to now seat 35 people. Low Down is operating a patio only.

“We’re in no rush to go inside,” said MacKell.

“These are uncharted waters so we have remained very cautious to see what is worth opening,” said Jennifer Vipond, one of the owners of Crow and Bruce Wine Bar in Thornbuy

Bruce has converted its main floor into a market for fresh food. There is a patio, but it is small and not opened to diners yet.

Though if and when they do open, Vipond said she’d be happy to comply with the province’s requirement of a customer log.

“Just a sheet with a name and phone number and when they dined is easy,” said Vipond.

The hard part is balancing the costs of reopening.

“Reopening has a multitude of costs and other procedures attached to it to keep things safe,” she said. “Restaurant margins are razor thin, so approaching this situation in a prudent manner is pivotal to our success. If things don’t work out and closures happen again, surviving may be tricky.”

Another Collingwood restaurateur is responding to those increased costs by cutting expenses in other ways.

Cam Dyment, owner of The Smoke, has not reopened his patio or his restaurant to dine-in customers. He is offering zero-contact, takeout options only, and people can use patio tables to eat their takeout if they like, though there’s no washroom access.

“COVID is still out there just as much as it was at the beginning of the year,” he said. “It has not been eradicated, people are just learning how to follow protocol to not get infected.”

He isn’t comfortable having people dine in, because they’ll have to take their masks off to eat.

“I find that kind of risky,” he said.

There’s also the cost. He would have 100 per cent of his usual expenses and only 40 per cent of the usual capacity for customers.

“As it is right now, I’m doing OK with my takeout,” said Dyment.

And because the restaurant isn’t open to the public, he’s been able to unplug things like extra deli fridges, draft beer equipment. He’s cancelled his premium sports TV cable package, and reduced costs for things like rags and mats.

He’s relying on the Canadian emergency wage subsidy and has brought back six out of 20 of his staff.

He’s also doing a lot of work himself.

Though the customer log won’t apply to him because he’s going to stick to zero-contact takeout only, he thinks it’s a good idea.

“I think it’s critical,” said Dyment. “If you get a case in a restaurant … you have to reach out to people because they may still be asymptomatic … it’s for the greater good.”

Over the course of the pandemic, Simcoe Muskoka District Health Unit medical officer of health Dr. Charles Gardner has received requests from media and the public about releasing the names of businesses where people with known cases of COVID-19 have visited while infectious.

Gardner has refused the requests, saying the health unit only publicly names a business if contact tracers have no other means of identifying close contacts of a case.

For more on the latest rules for bars and restaurants in Stage 3 released by the province of Ontario, click here.

Simcoe County residents supporting grassroots food programs in Honduras
Aug 9, 2020 1:00 PM
Comments
We welcome your feedback and encourage you to share your thoughts. We ask that you be respectful of others and their points of view, refrain from personal attacks and stay on topic. To learn about our commenting policies and how we moderate, please read our Community Guidelines.