Questions or concerns about voting? Ask election staff, not candidates 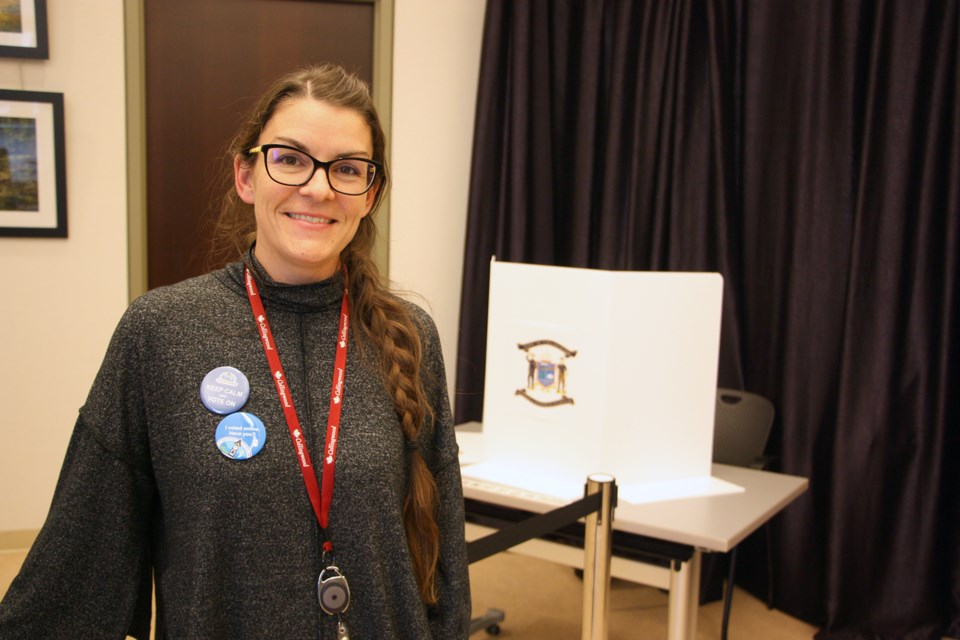 Collingwood Deputy Clerk Becky Dahl, was working at the Voter Help Centre at the Collingwood Public Library on Tuesday (Oct. 16). At the centre, residents can register to vote and may also use the devices provided to cast their vote with the help of election staff whom have signed confidentiality agreements. Erika Engel/CollingwoodToday

On Friday, candidate for Collingwood council Shawn Cooper held a Coffee and Conversation with the Candidate event at Gibson and Company that drew a bit of controversy due to the wording of the original event posting.

“Please join me this Friday at 10 a.m. for a cup of coffee and conversation about what’s important to you as a voter. Bring your friends, coworkers, family, anyone who has questions about what I will bring to the council table and why I deserve your vote. We will also have devices available for you to vote on location, all you need is your ballot,” read the now-edited post, which was adjusted a day prior to the event to remove the last sentence about devices being available on which to vote.

“I had an issue that came up at the end of last week where a campaign type of party was going to have available voting tablets to encourage people to bring in their voter information letter and vote there. So I circulated information to all the candidates what can and cannot happen,” said Collingwood town clerk Sara Almas.

According to the email circulated by Almas, she reminded candidates that they should use appropriate discretion regarding their participation in these types of events as candidates cannot campaign at polling stations.

“Individuals that have any questions or need help with the voting process should be encouraged to attend the Help Centre and qualified, friendly, helpful election staff, who have signed an oath of confidentiality/secrecy declaration are available to assist,” she wrote.

According to Shawn Cooper, it was never his intention to have devices at Gibson and Company, but instead he had planned to direct voters to the Help Centre.

“With the town hall so close, we would have been contacting town hall if people had wanted to go over and vote,” says Cooper. “People came. There weren’t any electronic devices. I think maybe two people brought information, and we directed them over to the library, which is a block away, and which is why I chose the venue I did.”

Cooper says his intention all along was to direct people to the library Help Centre should they want to vote that day as the voter process is so different this time around over past years. While Cooper also acknowledges that other Collingwood candidates showed up to his event, he denies that they are affiliated with each other in any way, and his event was open to anyone who wanted to attend.

“People attended freely,” says Cooper. “It was my event and I was the only one who hosted the event. Due to the time of year, I think there are people who are very passionate about where things are headed, and may read more into things than what was actually there.”

Tina Comi, another candidate for council, also drew some ire due to her offer to have voters send her messages if they were having trouble at the polls.

“Please note the hours for the library below for voting. If you are having issues voting over the weekend please message me,” Comi wrote on her campaign page on Oct. 12.

When asked questions on Tuesday about her intention to help, Comi thinks things are being blown out of proportion.

“Because this is Collingwood’s first time with online and telephone voting there have been many questions,” says Comi. “I’ve knocked on thousands of doors and personally distributed hundreds of voter information cards provided by the town containing detailed voting instructions.”

Regarding her offers to help voters being seen as an effort by some to influence how residents will cast their ballots, Comi says that was never her intention.

“My offer was one of sincere help to answer questions and my intent is to inspire people to vote. I believe reading anything more into it than that is simply cynical,” she says.

According to Almas, the only issues the town has heard from residents about voting so far is issues with the telephone system.

“It had kind of a robotic voice, and when (residents) had to enter the last eight digits of the voter ID, and on the telephone, it rambled too quickly, people couldn’t understand what it was saying,” she says. “We had it rectified on the weekend and so far, so good.”

Almas also says some residents have complained about the switch, but says the town is doing everything possible to help anyone who is having difficulty.

“There are people who are resistant to change... those that come in and say they want a paper ballot. I’ve heard it on a couple of occasions,” says Almas. “Some have said, ‘If it’s only Internet or telephone, I’m just not going to vote.’”

Almas says the attitude is concerning, considering that the town has done everything in its power to help people who have difficulties. They’ll even come to your home with devices, including a WiFi hotspot, to help residents vote in the comfort of their own homes if the need arises.

“That’s not an excuse. Your municipal government is the one that deals with issues that impact you every single day,” she says. “I want to encourage people to come to our help centres so they realize how easy it is.”

If you are having any trouble voting you can call the Town of Collingwood at 705-445-1030, send an email to election@collingwood.ca or visit the Voter Help Centre at the Collingwood Public Library during the following hours:

Broken telephone: residents complain of hard-to-hear telephone voting instructions
Oct 16, 2018 1:50 PM
Comments
We welcome your feedback and encourage you to share your thoughts. We ask that you be respectful of others and their points of view, refrain from personal attacks and stay on topic. To learn about our commenting policies and how we moderate, please read our Community Guidelines.