One Collingwood resident wants you to put your HEAD1ST

A life-saving diagnosis led one former hockey player to share his story and spread awareness about the link between concussions and mental health
Dec 12, 2019 1:30 PM By: Maddie Johnson 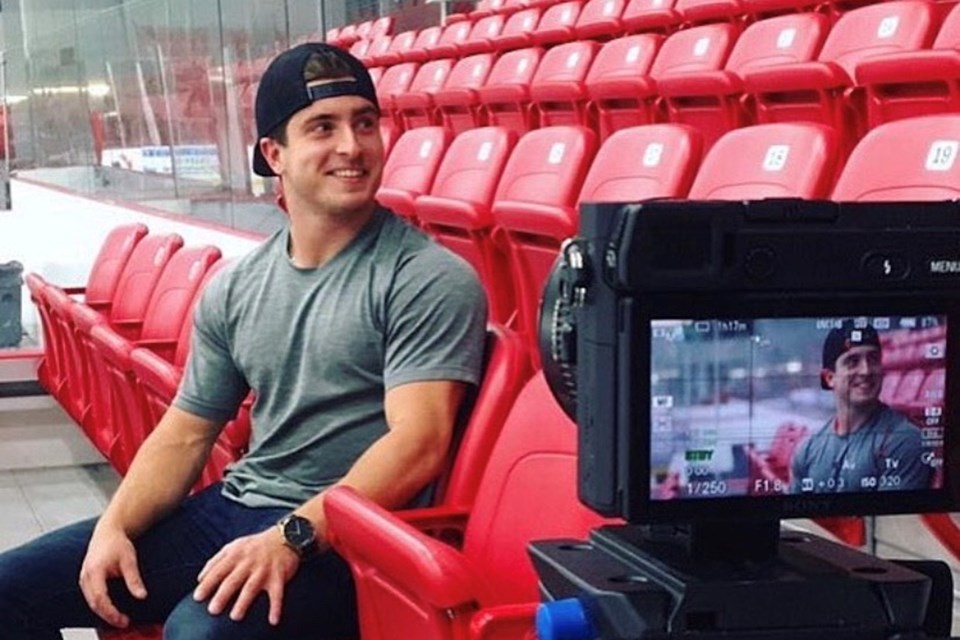 Cody Oehm started HEAD1ST as a way to increase awareness of the relationship between concussions and mental health. Contributed photo

Cody Oehm had always been a happy kid.

Growing up, he played just about every sport imaginable, eventually prioritizing hockey over all else. He was good, and quickly advanced to Junior B, playing for Owen Sound and Kincardine, among others. At 17 years old he was travelling around Ontario, making friends and spending every day playing the sport he loved.

But, like any sport, there are risks associated with it. Throughout his career, Oehm was hospitalized for three concussions and likely played through many more. While he never remained off the ice for more than three or four weeks, the impact the concussions had on his health was worse than he ever expected.

A few years later, something shifted. Oehm stopped socializing and started to pull away from his friends and family. He couldn’t sleep and found himself easily triggered and moody, spiralling into a deep depression. Within two months, he quit hockey and dropped out of school.

“I was a mess," said Oehm. "And with it, came questions. Mom and dad, family friends, everyone was concerned.”

Oehm had no idea why he was feeling the way he did but lacked the motivation to do anything about it.

As things got progressively worse, Oehm began binge drinking to deal with his depression, anxiety, and numerous other mental and physical health issues that continued to arise. He got to a point where he couldn’t hide it any longer, and eventually opened up to his family in hopes of seeking professional help.

Oehm was diagnosed with depression by his family doctor, but the prescribed medication didn’t work. Thus began three years of seeing 30-plus doctors and trying a constant cocktail of medication. He sought advice from countless doctors, therapists, psychologists, naturopaths, and even a hypnotist. Nothing worked.

“They all said the same thing. Take this medication, do that workout. I lost all hope, I was broken inside,” said Oehm.

Two years in, Oehm learned through blood work that his testosterone levels were at an all-time low, comparable to that of a 5-year-old boy. After months of more rejection, more waiting, and more despair, one doctor finally told him the words he had lost all hope in hearing: “This can be fixed.”

The swelling caused by Oehm’s multiple concussions impacted his pituitary gland — the part of the brain responsible for hormone production. Typical symptoms mirrored those of depression, but more than just the mental aspect, it had affected Oehm’s ability to gain weight, impaired his vision, and led him to experience hot flashes and constant lightheadedness.

Optimal hormones are critical for your overall health and well being, and Oehm’s were completely out of whack. The doctor prescribed him with testosterone replacement therapy (TRT), and within a month, he was back.

“I could sleep, I could think, I was happy, I was driven. I had a sex drive again,” said Oehm.

But unfortunately, not everyone is so lucky.

Four of Oehm’s former teammates died by suicide before the age of 25.

While Oehm could never be certain they experienced the same thing he did, he felt compelled to share his story. So he turned to Facebook.

In the spring of 2016, Oehm wrote out his whole story, describing his experience with the healthcare system, his physical health issues, endless emotional turmoil and the eventual support he got from one single doctor who saved his life.

The post was shared more than 3,500 times, reaching more people than Oehm ever imagined. He received an influx of messages and was able to directly connect with hundreds of people who needed his help.

The relationship between concussions and mental health is still widely misunderstood. Of the 30-plus doctors Oehm saw, only one was able to make the connection.

The Government of Canada public health website states concussions are a common injury with approximately 46,000 diagnosed concussions in 2016/2017 by hospital emergency departments for children and youth aged 5-19, according to the National Ambulatory Care Reporting System. In the same year, it was estimated there were 26,000 adult men diagnosed with a concussion and 20,000 adult women. The sports with the highest proportion of brain injuries among children and youth include ice hockey, rugby, and ringette.

The Centers for Disease Control estimates there are between 1.6 and 3.8 million sports-related concussions in the United States every year.

Speaking up is what enabled Oehm to eventually get the help he needed, so he wanted to encourage others to do the same. He developed HEAD1ST as a platform to do just that.

This past summer, Oehm created the official brand and designed an Instagram page and website to go along with it. He began connecting with other organizations and athletes, hoping to increase awareness. Oehm gave a speech at a local fundraiser for youth mental health last month, and has been contacted by other organizations and athletes in Collingwood and further. Oehm acknowledges that his solution might not be for everyone, but he hopes that by increasing awareness, it will encourage others to dig deeper so they can find a solution that works for them as well.

Still in its early stages, HEAD1ST is constantly morphing to meet the needs of the community it supports. But the mission is simple: To empower athletes to speak up about brain injuries and mental health.

In the new year, Oehm plans to create a pledge titled, PUTYOURHEAD1ST, where athletes, schools and other community initiatives can commit to increasing awareness about head injuries and join the conversation surrounding depression, anxiety and mental illness.

Full of adventurous athletes and adrenaline junkies, Collingwood is a fantastic playground for activities that make people extra susceptible to concussions. Oehm is committed to telling his story and continuing the conversation. He was lucky enough to get a second chance, and through HEAD1ST, he hopes he is able to give one to as many other people as he can.