For this runner, marathons were just the beginning

Local ultramarathon runner Nick Brindisi uses his home on the escarpment to train for some of the world's toughest races
Oct 31, 2019 12:30 PM By: Maddie Johnson 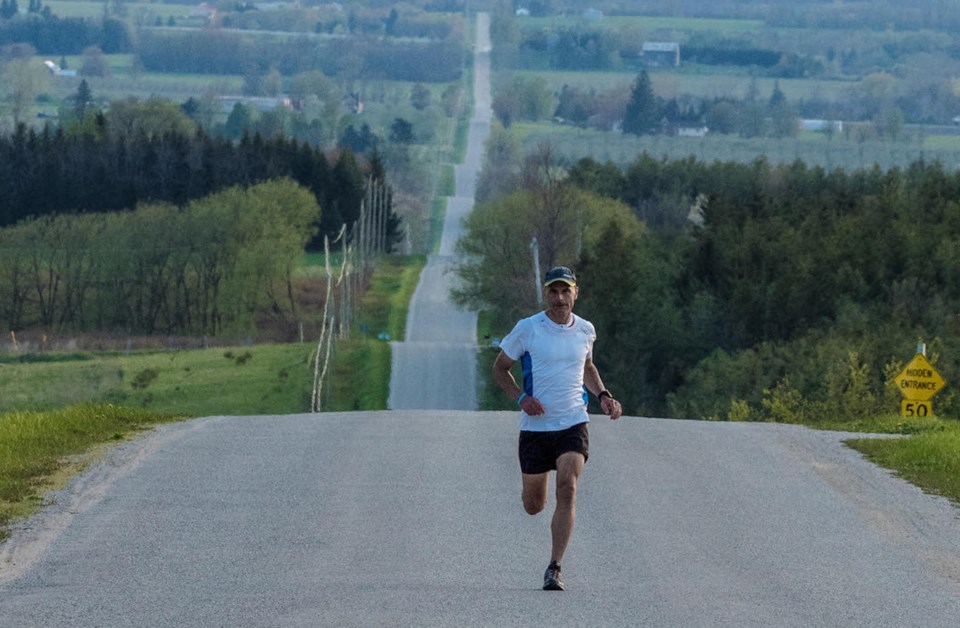 Nick Brindisi says to him, running is as natural as the bird flies. Photo by Tjalling Halbertsma.

After a long day at work, the only thing Nick Brindisi wants to do is lace up a pair of his running shoes and take off.

“It’s not just a sport, an act of doing something… It’s really a way of life,” says Brindisi.

If you ask Brindisi what he does, he’ll say he’s a runner. An ultra-runner, to be specific.

Ultra-running refers to any footrace longer than the traditional marathon length of 42.195 kilometres. Most ultra-running events also include significant obstacles, such as inclement weather, elevation change, or rugged terrain.

Brindisi has been running for as long as he can remember. His passion for the competitive side of the sport began in his early years at Collingwood Collegiate Institute, when he ran for both the cross country and track team.

And he never stopped. Brindisi is the president and co-founder of the Georgian Triangle Running Club, and admires the community that surrounds the lifestyle he is so passionate about.

Brindisi says the best part about Collingwood and The Blue Mountains is that it offers him a perfect place to train.

“There are so many good trails around here,” he says. “It’s crazy because some of my runs actually include three or four different places. Normally people only do one of them, but, for me, they all become one run.”

On one of his favourite routes, Brindisi will start from his yard and run up the Craigleith switchback, through the Loree Forest, under the Margaret Paul Side Trail and across, over to Osler Bluff and then back into town.

For a change of pace, Brindisi will sometimes run barefoot along Wasaga Beach to keep his feet strong.

“My favourite trail around here must be the entire escarpment,” Brindisi laughs.

Brindisi completed his first ultra race many years ago when he participated in the Creemore Vertical Challenge. Before that, Brindisi had never considered running longer than a marathon.

“I remember how surreal it was that I was still running after 43km. It was all new territory and sort of like an experiment,” he says.

And then just like that, longer distances became inevitable and quite attainable.

“It was like when Chuck Yeager broke the sound barrier in a rocket plane back in 1947, and, after that, the speeds grew exponentially as even faster airplanes were built,” he says.

The adrenaline rush pulled him in, and his passion pushed him to go further. Since then, Brindisi has competed in and completed ultra races all over the world. He still participates in marathons as well; he describes them as a “beast of their own.”

Every year on his birthday, Brindisi runs the number of kilometres of the age he is turning. At the beginning of December, Brindisi will run 57 km as a fundraiser for My Friend’s House. He is hoping to enlist other men from the community to run relay with him to put up a common front of men who won’t stand for violence against women.

Brindisi will continue to run all year round, but as winter hits he tends to slow down in order to give his body some time to heal before the next ultra season.

To give you an idea of the gruelling conditions an ultra event entails, the Sinister 7 Ultra, which takes place in Alberta, is a perfect example. Not surprisingly, it’s Brindisi’s all-time favourite race.

The 100-mile course takes you through the most rugged, remote and beautiful terrain in the Rocky Mountains. With 6,400m of elevation gain across the full course, this race will “punish those who are not prepared,” according to the race description.

The race is open to solo runners and teams of up to seven, and racers have 30 hours to complete all seven stages of the race. Of course, Brindisi opted to sign up as a solo racer.

Brindisi has participated in the Sinister 7 Ultra five times, finishing it only two of the five.

“I’ve had three failures that I call successful failures. It’s the only time I’ve ever DNF’d (do not finish),” says Brindisi. “But it’s the kind of thing that destroys your soul if you don’t finish, so you have to come back.”

Next summer, Brindisi plans to accomplish the famed Sinister Triple. Aptly named, the Sinister Triple brings together three of the toughest races in Canada. It includes the Sinister 7 Ultra, the Canadian Death Race and the Black Spur Ultra. Combined, the three races are almost 400km with over 13,000m in elevation, and all happen within six weeks time.

When he is not training for anything in particular, Brindisi will head out on an “easy” 10-km.

Brindisi’s goal is to eventually make his passion a full-time career. He began coaching other runners, not only to assist with their running schedules but with the mental aspect of training as well.

“Your mind goes to some pretty wacky places when you run 100 miles,” says Brindisi. “But you get in touch with yourself, in touch with the universe. You just learn who you are better.”

He also created a website to celebrate not only the running community, but all active lifestyles. It includes a blog where he recounts some of his wildest running moments, and guest contributors can tell their tales as well.

To learn more about the local running community and read about some of Brindisi’s other adventures, visit his website here.