Three bold brothers are bringing their passion for health and wellness to the shores of Collingwood and also to Nicaragua
Oct 24, 2019 12:30 PM By: Maddie Johnson 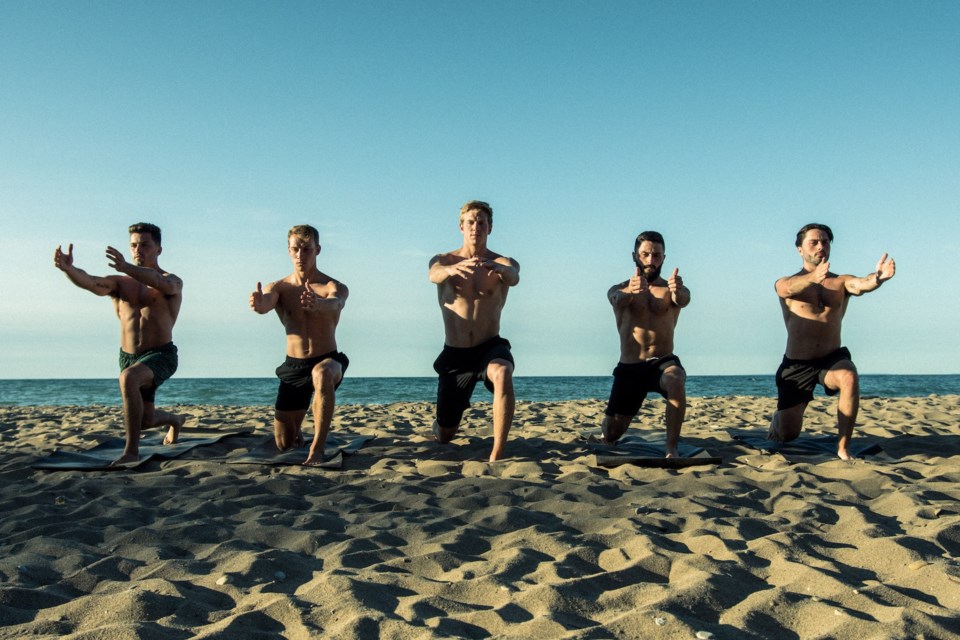 Lukas Burella begins his day by setting an intention.

“If your body isn’t functioning properly and you aren’t able to find stillness in your mind, then it’s really hard to appreciate anything more than yourself,” says Burella.

The 23-year-old from Wasaga Beach uses this mentality to not only understand fitness, but at health as a whole.

He created Primitive Patterns to do just that.

Burella paired with his brothers, Josh and Jacob, and friends Cole Martin and Tate Funston, to change the way people address health in their community. Their mission is to help clients reconnect with their mind, body and nature through unique fitness experiences.

The team is young, and they don’t pretend to be experts. But their promise is that they will be someday.

And they have the passion to prove it.

Burella left home for university when he was 17, but was diagnosed with Crohn’s Disease a few months into his first year. After weeks of doctor shuffling and medication roulette to no avail, Burella took his health upon himself.

“It may not have been the smartest move, but I stopped taking all of my medication,” he says. “I decided I was going to educate myself. I was going to see what I could do diet-wise, and to manage my stress levels.”

He was 18 at the time. After a six-month hiatus, Burella went back to university and graduated with a Bachelor of Science in Kinesiology. He’s been off his medication ever since, and Burella says he has never felt better.

“I liked what I was learning and I was going to continue on and do my master’s, but I realized I could create a lot more change if I started something," he said.

That something began with a blog, which quickly morphed into the groundwork on which Primitive Patterns is based.

Last summer, the guys introduced free, community workouts that took place every Saturday morning at Sunset Point. They met a lot of great people and got good feedback, so they introduced a membership program this past summer and held sessions every day.

The workouts focus on outdoor-based movement and always end with 10-15 minutes of mindfulness and yoga-based stretching.

“The turnout was way better than we expected, and we just had a ton of fun. We’re pumped for next summer to scale it up and interact with as many people as possible,” says Burella.

Now that the busy summer has come to an end, Burella is packing up Primitive Patterns and heading south for the winter.

“We want to offer unique health experiences in other places as well,” he says.

Burella and his brother, Josh, set up camp in the remote town of Salinas Grandes in Nicaragua. Partnering with other local businesses and inspiring individuals he’s met in the Collingwood area, Burella hopes to give his clients the opportunity to deepen their understanding of themselves by disconnecting with everything else.

Their retreats focus on yoga, healthy eating, surfing, and other aspects of physical and mental health, but fundamentally they are all centred around reconnecting with nature.

“We view health as an expansion of our human potential,” says Burella. “We’re pretty blessed to be in an infinite universe on planet earth and having a human experience. I think the best way to make sure that experience is as good as possible is to connect with nature, because that’s where we come from.”

“We use fitness to create an internal environment that allows you to be in awe of the whole in order to have the best human experience possible. That’s why we’re so passionate about it,” he continues.

Burella has an issue with the typical stereotype surrounding the fitness industry. He says it’s not just about the egocentric, ‘look-at-my-body’ attitude.

“There are so many different aspects of health that are neglected in our culture. To us, it’s about being able to have a good conversation, feel mentally well, and be grateful for things that are going on,” says Burella. “We try to blend the physical with the emotional, spiritual and social as much as possible. It’s all a part of it.”

Burella has big plans for Primitive Patterns next summer, and hopes to introduce more partnerships and programs with other local experts. He says having the backdrop of Georgian Bay and the Niagara Escarpment make this area a perfect playground to continue developing the business.

“We’re still young, and really, Primitive Patterns isn’t much yet. We don’t have all the answers and we’re not yet masters in our fields, but we will be. Our promise is that we will never stop learning, never stop asking why, and never stop the pursuit of mastery.”