Beginner to provincial competitor in a year: this athlete found a passion on the ski hill

A provincial-level competitor with national dreams, Andrew Richards is always working to improve his skills in his two sports: golf and skiing
Jan 23, 2020 1:30 PM By: Maddie Johnson 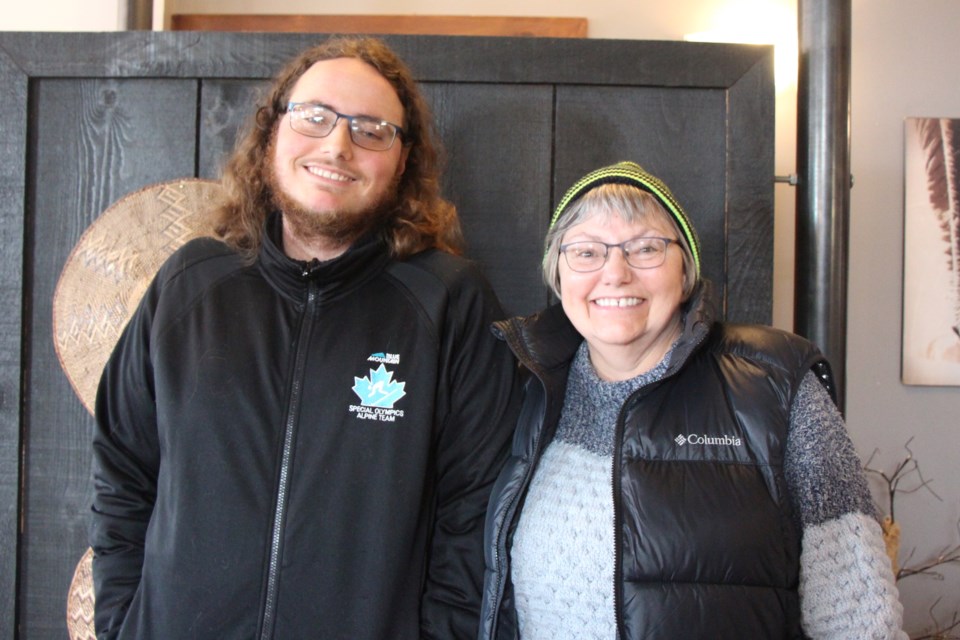 Andrew Richards in his team uniform with his mother and biggest supporter, Donna Lynn Torrance. Maddie Johnson for CollingwoodToday

As soon as Andrew Richards starts talking about skiing, his face lights up.

“I find it so enjoyable, there is always something to learn,” said Richards. "And the cold doesn’t bother me much at all.”

So you’d never guess that he only stepped into his first set of skis six years ago.

Growing up, the thought of being a skier never even crossed Richards’ mind. He describes himself as being “extremely shy” and was afraid of being in large groups of people. Now he's a provincial-level competitive athlete.

Shortly after moving to Collingwood with his family, Richards was golfing with Breaking Down Barriers and ran into a committee member from the local Special Olympics organization. They asked if he would like to try skiing that winter.

“I figured, why not? what’s the worst that could happen?” said Richards.

Through an agreement between Special Olympics Ontario and Skiis and Biikes, Richards was able to get suited up with a loaner set of skis.

“I remember the first day,” said Richards. “It was fun but challenging.”

Like many new skiers, Richards started on the beginner hills, but he had natural talent and quickly advanced to the bigger chairlift runs a few days later. He was hooked, and as luck would have it, it was a qualifying year for the next Special Olympics Provincial Games.

Richards became determined but “surprised himself” when he managed to qualify.

He got his own set of skis and went to to the below-40-degree temperatures of North Bay the following year.

“Luckily, the cold doesn’t really bother me,” he laughed.

Richards now skis a minimum of two or three times a week, training every Sunday morning with the Special Olympics team and heading out with friends and family any time he can.

Earlier this year, Richards competed in his second Provincial Games in Sault Ste. Marie with 20 other athletes from the Central Region.

“The games are fun but so stressful,” said Richards. “You are running around non-stop and not getting much sleep. You vibrate off of the walls from the hype!”

When he isn't competing, Richards favourite time to ski is in during the day, before the crowds have destroyed the runs and the visibility becomes limited. He loves when it’s cold so the snow doesn’t break down as much and he can really fly.

“One of my favourite parts about skiing is the speed of it and just how enjoyable it is,” he said.

But what Richards appreciates most is the influence skiing has been on him.

Richards said his “extreme shyness” limited him from talking to most people and he wasn’t able to participate in any group activities. Skiing has brought him out of his shell.

In fact, it has made him so confident that Richards is currently in the process of getting his level one ski instructor certification, and he recently started working for Blue Mountain, teaching younger children how to ski.

“I’m mainly just catching them most of the time, but we have fun. It feels so good when they thank you for teaching them, and you actually get to watch them get better,” said Richards.

His goal once he retires from competition is to be a full-time ski instructor.

“My advice for anyone who is thinking about getting into skiing — or any sport — is just to try,” he said. “Don’t be nervous, because you will likely pick it up and really enjoy it.”

“You have to have a really good instructor, though,” Richards continued. “That’s important. One who is patient and calm, but helps you accelerate and bring your game to a higher level. They need to motivate you but not push you too hard, so you aren’t scared."

Richards is thankful for his own coach, Patty Mulligan.

The Blue Mountain Special Olympics Team has one coach or volunteer for every one to three athletes, but Richards said they are always looking for more volunteers so they can have one-on-one coaching.

In the off-season, Richards golfs on the Special Olympics team.

This past summer, Richards entered into his first golf tournament that wasn’t part of the major games, and he ended up placing first in his category.

“I was quite excited about that. It felt good to finally win something,” he laughed.

Between the summer and winter provincial games, Richards is always working towards something, and he said he always has something to look forward to.

“If I don’t win one I just focus on the next. I spend the off-seasons working on my technique and try to improve both sports,” he said.

Richards’ ultimate goal is to make it past the provincial level. He dreams of attending a national-level competition one day, but he is very content where he is at, skiing and golfing as much as possible with his teammates and giving back to the community in any way he can.

The Blue Mountain team is hosting an Invitational Alpine Ski Race this weekend (Jan. 25 and 26), and Richards is looking forward to racing against other teams in Ontario without the pressure of the Provincial Games.

Donna Lynn Torrance, Richards' mother, is his number one fan. She is so happy to watch him thrive and witness how much both sports have brought him out of his shell.

“The best part about these sports is that neither of them really have an age limit,” said Torrance. Richards adds he was golfing with an 87-year-old man on his team this past summer.

“We need to keep supporting the Special Olympics and the athletes, and bring awareness to all of the programs they offer,” she said.

Richards agreed: “I want to give back and hopefully be able to give this to others because it has done so much for me.”