Blue Mountain's youngest ski shop owner mixes the old-fashioned history of skiing with modern knowledge at his store where an Austrian immigrant first set up shop 50 years ago
Jan 10, 2020 1:45 PM By: Maddie Johnson 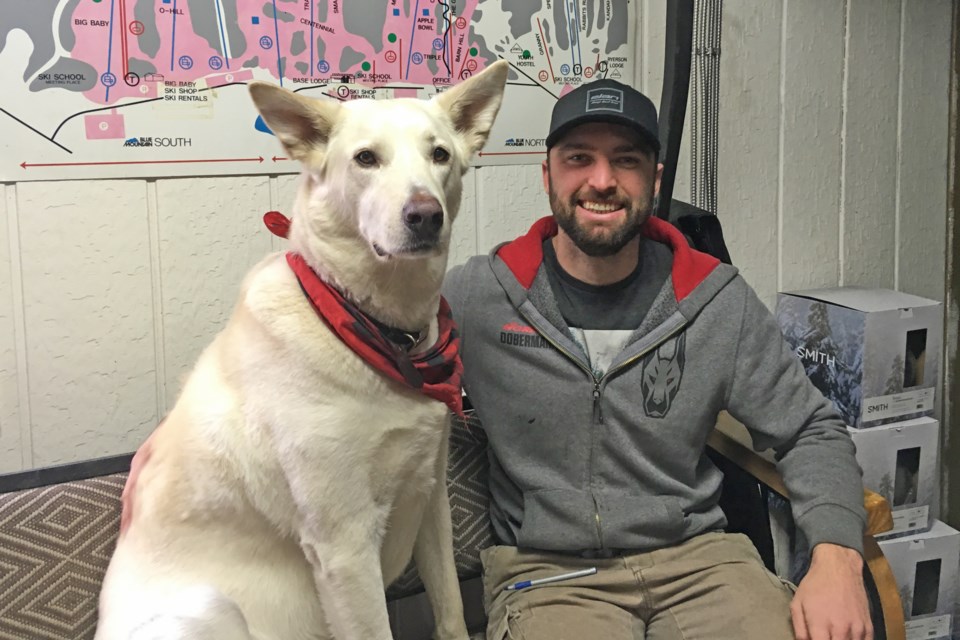 Brody Nickels, the owner of Rick's Pro Ski Shop, with his dog Cooper. Nickels bought the business at 17 years old and maintains some of the old-fashioned charms of the building that has been a ski shop for 50 years. Maddie Johnson for CollingwoodToday

Nestled on the north side of Blue Mountain Resort stands a little ski shop with a lot of history.

And while there's old-fashioned charm to the building and a legacy of ski shops at the location, its owner is one of the area's youngest entrepreneurs.

“It’s one of the oldest shops in the area,” said Brody Nickels, the owner of Rick’s Pro Ski Shop. “We still have the original fireplace in the back, which makes the shop nice and cozy when people are getting fitted for rentals.”

Rick’s, as a business, has been around since the early 2000s, but the building has been used for ski sales and boot fitting for well over half a century.

Around the same time Jozo Wieder started building Blue Mountain into what it is today, another Austrian found his way to the quaint town of Collingwood.

Karl Zotter grew up in war-torn Austria where he fell in love with skiing at an early age. With a jobless father and 10 siblings to feed, Zotter was never able to afford skis of his own until he was in his late teens. To him, skiing meant getting up at the crack of dawn, hauling the wooden slats on his shoulders and braving the unploughed trails — there were no lifts to be found.

When he arrived in Canada in 1953, Zotter started working at the Shipyards, working part-time at Jozo’s ski shop on the weekends.

It was a job he had always dreamed of, and 10 years later opened a place of his own. Zotter acquired a small building at the base of the Toronto Ski Club and opened the doors to Zotter’s Ski Shop (Now Rick's).

Zotter was known for his excellent customer service and skilled ski tuning, and the friendly shop dog that would eagerly greet customers. According to his obituary, Zotter would go out of his way to help people who couldn’t afford rentals, remembering the hard times he had growing up in Austria.

After 30 years, Zotter’s eventually closed its doors — but they didn't stay closed long.

Rick Sim had spent over two decades as a fitter at Slalom Gate. Knowledgeable in all things skis, he decided to revitalize Zotter’s shop as his own.

Sim was old fashioned in all ways. He kept all of his old equipment in impeccable shape and never threw anything away. The shop was filled with bins of old bindings and boot soles, and he tuned everything by hand.

When Nickels was 13-years-old he stumbled into the shop to get his boots fitted and after chatting, Sim hired him on the spot.

When Rick passed away four years later he gave Nickels first right to buy the business. So, with the help of his parents, Nickels bought the business from the estate when he was 17 years old. That was 2012, and Nickels has been running the shop ever since.

Nickels learned a lot from the particular and organized Sim in the old-fashioned shop. When summer hit Collingwood, Nickels chased winter to New Zealand where he learned boot fitting in a modern shop.

As the new owner of Rick's, Nickels toyed with the idea of changing the name, but he liked the link it had to the shop’s history. Now 26, Nickels has expanded the shop to include a retail area in the front and a wide variety of ski and snowboard rentals for all ages and abilities.

Nickels is the youngest ski shop owner in the Blue Mountain area, and he is continually looking for ways to stay on top of trends and expand his business. But he keeps the history of the shop and Sim's and Zotter's old-school methods at the forefront.

“We still hand finish all of our tunes,” Nickels said. “It’s a touch of both. Old school methods with a new school twist.”

Beside the original fireplace in the back sits an old ski lift from Talisman where customers sit comfortably while they get fitted for their rentals. An original trail map of Blue Mountain Resort hangs on the wall behind it.

While he dreams of expanding someday and has tossed around the idea of a second location, Nickels is content with where his business is now. He spends the fall travelling around to ski swaps all over Southern Ontario, and enjoys going for beers after work with other shop owners in the area.

“The ski community is like no other. From the shop owners, to the brand reps and customers, we’re all cut from the same cloth. It’s a lot of fun,” he said.

His favourite part is the interesting and amazing people he gets to meet along the way.

“Being a resort town, people are always so happy. I get to help them try skiing for the first time, or fall in love with it all over again.”

Nickels has his crew of regulars who come to him for ski tuning year after year, and he has helped fit people for rentals from all over Canada, Mexico, Europe, and more.

And most importantly, he has Cooper, a shop dog of his own that eagerly greets customers when they walk through the door.

Local parasnowboarder sets sights on next Olympics
Nov 7, 2019 12:30 PM
Comments
We welcome your feedback and encourage you to share your thoughts. We ask that you be respectful of others and their points of view, refrain from personal attacks and stay on topic. To learn about our commenting policies and how we moderate, please read our Community Guidelines.