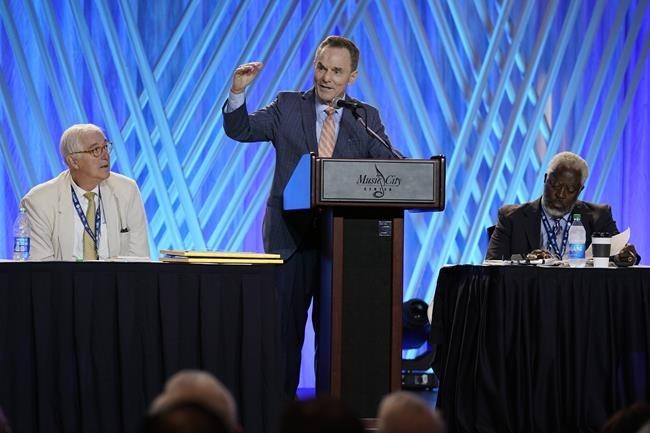 NASHVILLE, Tenn. (AP) — The Southern Baptist Convention tamped down a push from the right at its largest meeting in decades on Tuesday, electing a new president who has worked to bridge racial divides in the church and defeating an effort to make an issue of critical race theory.

The more than 15,000 delegates in attendance picked as their next leader Ed Litton, a white pastor from Alabama who was nominated by Fred Luter, the only Black pastor to serve as president of the United States’ largest Protest denomination. Luter praised Litton’s commitment to racial reconciliation and said he has dealt compassionately with the issue of sexual abuse within SBC churches, another hot-button subject at the gathering.

In the second round of voting, Litton defeated Mike Stone, a Georgia pastor backed by a new group called the Conservative Baptist Network, which encouraged supporters to come to the meeting as voting delegates. Mike Stone had campaigned aggressively, including speaking at churches across the country and even appearing on Fox & Friends on Tuesday before the vote.

In the end the message that Stone — who supported a motion to repudiate critical race theory — was a divisive choice, seemed to resonate with voters.

THIS IS A BREAKING NEWS UPDATE. AP’s earlier story follows below.

Nashville, Tenn. (AP) — Representatives to the Southern Baptist Convention's annual meeting tamped down a controversy on race and heard an impassioned plea for victims of sexual abuse Tuesday while awaiting results on a bellwether presidential election.

Some among the more than 15,000 church representatives in attendance — making it the SBC's largest yearly gathering in at least 25 years — urged a sweeping review of the denomination’s response to abuse in its churches, an issue that recently erupted with secret recordings and leaked letters involving top leadership.

There were also calls for the conservative denomination to move even further to the right and for a denunciation of critical race theory, an academic construct for framing systemic racism that has been a target of religious and political conservatives. One proposal would have denounced the theory by name.

But delegates decisively voted by a show of ballots to approve a measure that sought to reach consensus, not specifically naming critical race theory but rejecting any view that sees racism as rooted in “anything other than sin.”

The measure also affirmed a 1995 resolution apologizing for the history of racism in a denomination that was founded in 1845 in support of slavery, and which apologized for “condoning and/or perpetuating individual and systemic racism in our lifetime.”

One white delegate urged the convention to denounce critical race theory by name, saying it held him “guilty because of the melanin content of my skin.” But another argued that the convention shouldn't be swayed by a political movement that has already seen some state legislatures ban the teaching of CRT.

Several Black pastors have voiced frustration over such debates playing out in the SBC instead of the denomination confronting systemic racism itself.

“If some people in this room were as passionate about the gospel as they are about critical race theory, we would win this world to Christ," said James Merritt, chairman of the resolutions committee and a former convention president.

On the sex abuse issue, Tennessee pastor Grant Gaines, speaking with a survivor at his side, proposed a task force that would oversee a review of the denomination’s actions, a broader investigation than the one announced last week by the SBC’s Executive Committee.

Separately the resolutions committee proposed a resolution declaring that “any person who has committed sexual abuse is permanently disqualified from holding the office of pastor.” SBC churches are self-governing, and critics have said the denomination hasn’t done enough to exclude congregations that mishandle abuse.

The representatives, known as messengers, gave final approvals to constitutional amendments excluding churches that affirm ethnic discrimination or act against the convention's “beliefs regarding sexual abuse.” Still to be debated was how those standards on abuse apply in practice.

In an enthusiastically applauded address, outgoing president J.D. Greear, himself a target of criticism, lamented “the slander, the distortion, the character assassination and baseless accusations” some SBC leaders have endured. While denouncing liberalism, he also criticized unnamed individuals he said are splitting the denomination over secondary issues and said the convention is endangered by divisiveness and power-seeking.

“What does that look like today? ... It might look like any institution that creates unnecessary obstacles for victims of sexual abuse, who seek justice, by hiding behind legal smokescreens or NDAs (non-disclosure agreements),” Greear said.

Greear said the SBC cannot be a “cultural affinity group” or “voting bloc” but must focus on its spiritual mission.

On critical race theory, he said it arises from “a worldview at odds with the gospel,” but he heeded “leaders of color who tell us that our denunciations of justice movements fall on deaf ears when we remain silent on the suffering of our neighbors" and the pervasive impact of racism.

Pastor Bryan Kent of Compass Church in Mason, Mich., commended Greear's remarks, saying that if critical race theory “has an echo of truth among our brothers and sisters of color … we should not be in such a rush to condemn.”

In the the first ballot for president, Mike Stone, a Georgia pastor, received 36% of the votes, followed by Alabama pastor Ed Litton at 32%. That eliminated two other candidates including longtime Southern Baptist Theological Seminary president Albert Mohler, who got 26%.

Results of a runoff vote were expected later.

Stone is the preferred candidate of a new group within the denomination that calls itself the Conservative Baptist Network. Some network members have adopted a pirate motif on Twitter while declaring their intention to #taketheship.

Stone has been campaigning hard, speaking in churches around the country, and the network has been encouraging supporters to attend the annual meeting as voting delegates.

Litton was among an ethnically and racially diverse group of Southern Baptists who signed a statement asserting that systemic injustice is real. He is supported by Fred Luter, the only Black pastor ever to be denomination president.

At least one prominent Black pastor has said he will leave the SBC if Stone is elected. An effort to repudiate critical race theory, supported by Stone, has already led to the departure of some Black pastors over what they said was racial insensitivity from overwhelmingly white leadership.

The Southern Baptist Convention is structured as a loose network of independent churches that pools money for tasks like missions and evangelism. The role of president is primarily a bully pulpit, but the president does have the power to make committee appointments that can then set the direction of the denomination.

That’s what happened in the 1980s when a group carried out what they called the Conservative Resurgence, pushing out more liberal leaders and helping forge an alliance between white evangelicals and Republican conservatism.

The recently surfaced recordings and letters regarding sexual abuse purport to show some leaders tried to slow-walk efforts to hold churches accountable and to intimidate and retaliate against those who advocated on the issue. Stone was specifically called out as pushing back against accountability efforts, an accusation he has called outrageous.

Delegates also approved a strategic plan seeking to increase churches, missionaries, giving and teen ministry. It's the latest in a series of efforts to reverse steady declines over the past 15 years in members and baptisms. Membership is now 14 million.

The official delegate count as of Tuesday afternoon was 15,678, although attendance may be larger. In a hall with 18,000 seats, there was standing room only.

With Nashville’s COVID-19 precautions lifted, attendees were packed closely into the standing-room-only venue without masks. One small section of the room was reserved for those wearing masks. Last year's annual meeting was canceled due to the pandemic.

Associated Press religion coverage receives support from the Lilly Endowment through The Conversation U.S. The AP is solely responsible for this content.