In this Midweek Mugging find out more about an innovative science technology company in the heavy water business hoping to inspire youth in the STEM industries.
Aug 15, 2018 1:00 PM By: Erika Engel 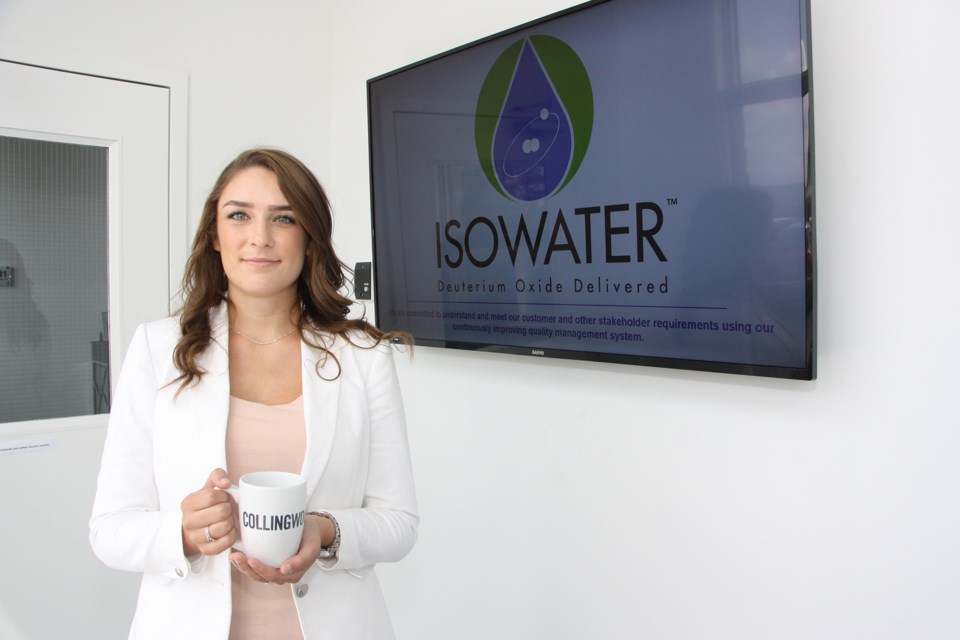 Kennedy Westlake is working as a co-op intern at The Isowater Corporation, a Collingwood-based company in the business of delivering heavy water to private industry. They are also heavy on inspiring young people toward careers in the STEM industries. Erika Engel/CollingwoodToday

Science, technology, engineering and math – or STEM as its now referred to – is seeing a big push from related industry as the demand for those expertise increases.

In Collingwood, The Isowater Corporation is one such company in the industry hoping to inspire future employees while they are still in high school.

In addition to being a top co-op employer in Simcoe County, Isowater has developed its own annual STEM awards, which are given to high school students in the county who demonstrate excellence in one or more of the STEM fields.

“There’s a science gap here and we want to fill that gap,” said Lisa Stuart, vice president of sales and marketing for Isowater. She and her husband Andrew Stuart started the company in 2009.

Before launching Isowater, Andrew Stuart was one of the world’s leading hydrogen experts. When he heard then Prime Minister Stephen Harper announce the privatization of Canada’s nuclear power industry, he had an idea.

There’s a product used to cool nuclear reactors called heavy water. It’s a product that isn’t much different from “light” water (or regular water) other than it contains deuterium oxide in high concentration. It’s naturally occuring and can be extracted from a regular water source.

Heavy water is not irradiated, it can be used to cool nuclear reactors, but is not part of the nuclear power generation process outside of its cooling effects.

The Canadian government has a surplus store of it, and is now allowing private industry access.

The Isowater Company in Collingwood sells Canada’s heavy water for various uses in the scientific community.

At Isowater, there are two science streams including engineering/research and development and laboratory science. There are also several employees involved in shipping and receiving the product. The Collingwood location doesn’t store large quantities of heavy water, it’s a central shipping location for the product.

“We could be based anywhere, but we want to be based here because we love it here,” said Lisa. She and her husband enjoy the outdoor activities and were glad to raise their children in Collingwood.

Both children participated in science fairs - of which Lisa is a big proponent - and both went into STEM industry programs - one for material engineering and one for chemical engineering.

“They did science fairs and it changed their life,” said Lisa, adding she’s glad for the teachers who put forth extra initiative and encourage their students to participate in science fairs. “It’s a lot for teachers to take on as extracurriculars, but it’s an amazing opportunity to grow and learn through the science fair process.”

As the world’s first private company selling and distributing heavy water to the private industry, The Isowater Company hopes to inspire young STEM-minded students to be innovative and understand the limitless possibilities in the industry. Lisa said they will be expanding the awards program and are experimenting with youth outreach programs in local community centres, the details of which are still under wraps. Isowater tries to provide a non-traditional coop experience for as many youth as possible.

The Isowater Corporation is located in a new building on Sandford Fleming Drive in Collingwood.