Former busker plays out musician’s dream through his store

For this week’s What’s Up Wednesday, we talked with Rob Brown, owner of Blue Mountain Music on Hurontario Street
0
May 15, 2019 11:00 AM By: Jessica Owen 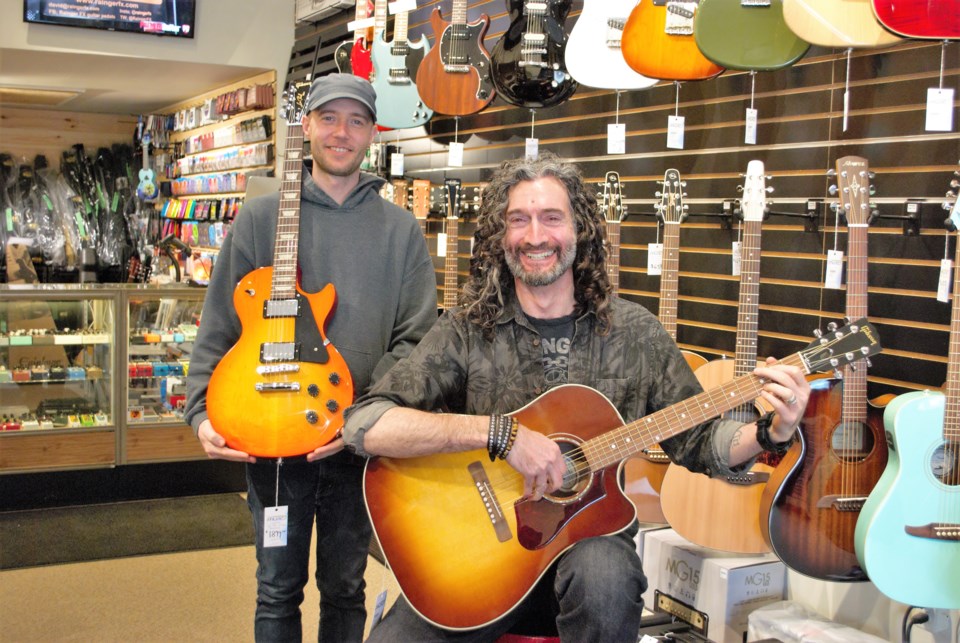 Although he once spent time busking across Canada and Europe, Rob Brown settled down in Collingwood and now owns Blue Mountain Music on Hurontario Street.

“For anyone who plays music, owning a music store is a dream gig,” said Brown.

While the shop has been in existence for more than 30 years, Brown has only owned the business for the past three.

“I was the weekend guy for a few years. Then, when I had the opportunity to take it over, I took it. It’s a great way to have music as a major part of your life,” he said.

Blue Mountain Music has been on the same block in Collingwood since the 1980s. It’s been in its current location since the later 1990s.

“In a place like Collingwood, it’s an awesome business to run because you have great locals, great regulars and new people coming into town all the time who are also into music. It’s cool to be a part of that,” he said.

Brown plays guitar, sings and plays the ukulele. The life-long musician spent years busking across Canada and beyond while travelling to make money along the way. He says music has been a big influence in his life since childhood.

“It’s a lot of fun. I think a lot of people who play and sing can do that while travelling,” said Brown. “Out east it’s a big thing, and I’m from Nova Scotia.”

“You can make supper money,” he said with a laugh. “It’s fun and you get to meet people.”

Brown points to Collingwood’s busking scene growing year over year. He says the best busking spot in town is directly in front of his store.

“It’s been really cool, the growth they’ve seen there. It gets people interested,” he said. “We see people who are starting to play with the goal of busking next summer.”

Brown says he gets a great sense of satisfaction seeing musicians develop over time.

“About six years ago I had one little guy come in, and he could barely see over the counter. His mom said, ‘He likes to play Ragtime music,’” said Brown. “We had a nice piano at that time. He ripped Ragtime for about five minutes straight, this little, tiny dude!”

“Now, he’s an incredible musician. It happens over and over, people finding music and finding relief in it or release in it,” he added.

Brown describes the incredible feeling he still gets when someone comes in and buys their first guitar, piano or any instrument.

“To see them coming in, lit up about it and excited, it’s awesome,” said Brown. “Also, it makes me remember my first guitar, or my first expensive guitar.”

Brown attributes the success of the store to the enthusiasm of the staff he has there.

“Everybody here gets excited to be a part of someone’s first instrument or upgrade instrument. Art makes art,” said Brown. “Their faces light up. It’s awesome.”

Looking forward, Brown says he has no plans to expand, but doesn’t rule it out completely.

“The size of this shop works to our advantage. It keeps us disciplined. We have to really focus on what’s working,” said Brown. “If we were larger, I don’t know if that would work for us. We’ve hand-picked everything that’s here.”

“We try to strike a balance. We’re a small shop so we can’t have everything that’s out there. So, we really try to curate it based on what we think is cool, and our regulars give us feedback,” he said. “We also like to surprise our regulars with their favourite things too.”

Thornbury recording studio a lifelong dream in the making for engineer
Feb 12, 2020 10:31 AM

Local couple's 'passion project' part of plan to re-invigorate Craigleith
Jan 29, 2020 12:00 PM
Comments
We welcome your feedback and encourage you to share your thoughts on this story. We ask that you be respectful of others and their points of view, refrain from personal attacks and stay on topic. To learn about our commenting policies and how we moderate, please read our Community Guidelines.