Finding a perfect fit in the shelves of a bookstore 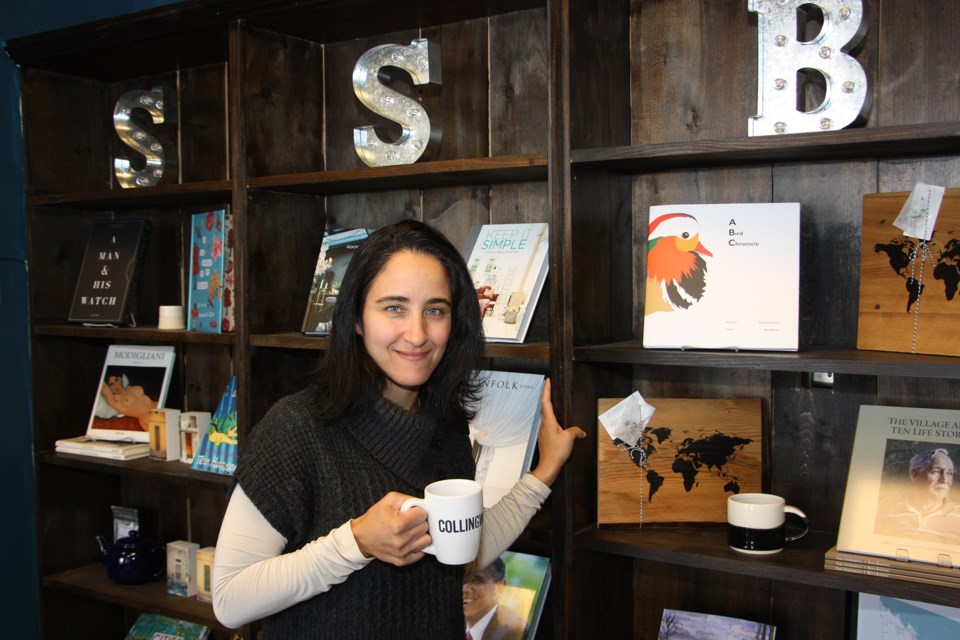 On Collingwood’s Creative Simcoe Street is a small bookstore carefully constructed, vibrantly painted and meticulously curated, a place where the books, art, gifts and other items fit together. In fact, fit is exactly what brought owners Rina Barone and Chris Dunk into the bookstore business.

Simcoe Street Books opened October 2017, and is owned and operated by the same team as Curiosity House Books and Gallery in Creemore.

Barone and Dunk bought the Creemore store in October 2014.

“We were working in the city and moved to Creemore. The bookstore [Curiosity House] came up for sale and it was the perfect fit for us,” said Barone.

Curiosity House has been operating in Creemore for 23 years, and since Barone and Dunk had first visited Creemore with their children, they gravitated to the little bookstore.

Barone comes from a background in journalism. She spent most of her career working as a director, writer and producer in documentary television. Her husband is a contractor. They have both left their careers to operate their book shops. They opened Simcoe Street Books shortly after Crow’s Nest (formerly the book store in Collingwood) closed.

“We think every town should have a local bookshop,” said Barone. “A bookstore is a place of ideas … a place where people come to connect … they talk about current events, politics, philosophy, everything.”

Dunk and Barone were selective about the location for Simcoe Street Books, they thought it was important to have a strong connection to a small community.

“Curiosity House is a community hub, and we didn’t want to open in Collingwood just anywhere,” said Barone.

They found a home at Simcoe Street in the same building as Creemore Coffee Studio, the Farm-To-Table Market and Kitchen and Simcoe Street Theatre. Dunk fixed up the space to suit a bookstore – including building custom-made bookcases – and added to the facade.

Simcoe Street Books has partnered with the Creemore Coffee Studio to cross promote each other’s businesses and is also working with the Simcoe Street Theatre for quarterly events called In The Writer’s Studio. This winter there was a panel of writers for the event, and coming up on April 29, Michael Redhill, author of the Giller-winning Bellevue Square, will be at the theatre for an In The Writer’s Studio discussion.

Barone places special importance on community outreach and literacy, and she uses both bookstores to promote that message.

“We stress how important it is to read and connect with a book, you can’t find that online,” she said. “There’s always a book for everyone. We want to connect books with readers and readers with books. It’s a personal thing.”

Barone and Dunk have also started a publishing company under the name Curiosity House Books. They have published three books including two local history books and a children’s ABC book written by Barone.

Barone was inspired by a bird/type project by illustrator Ruth Ann Pearce, who had paired an illustrated bird with a letter of the alphabet in its own font.

“They were so graphic and vibrant, I thought, ‘that would make a beautiful children’s book,’” said Barone.

The publishing company didn’t yet have the funds to hire a writer, so Barone did it herself, and titled it A Bird Chronicle.

“They call it mom’s book,” she smiled. “I did it for my kids. My eldest now picks it up and reads it to herself.”

Whether she’s buying a book for the store or reading one for the publishing company, Barone said she’s always looking for a good story.

“It’s all about stories,” she said. “It should encourage the reader to see something in a different way.”

Trending in What's Up Wednesday