County council has launched a task force that will help to guide the projects to construction and ensure deadlines are met
Jan 19, 2021 4:00 PM By: Jennifer Golletz 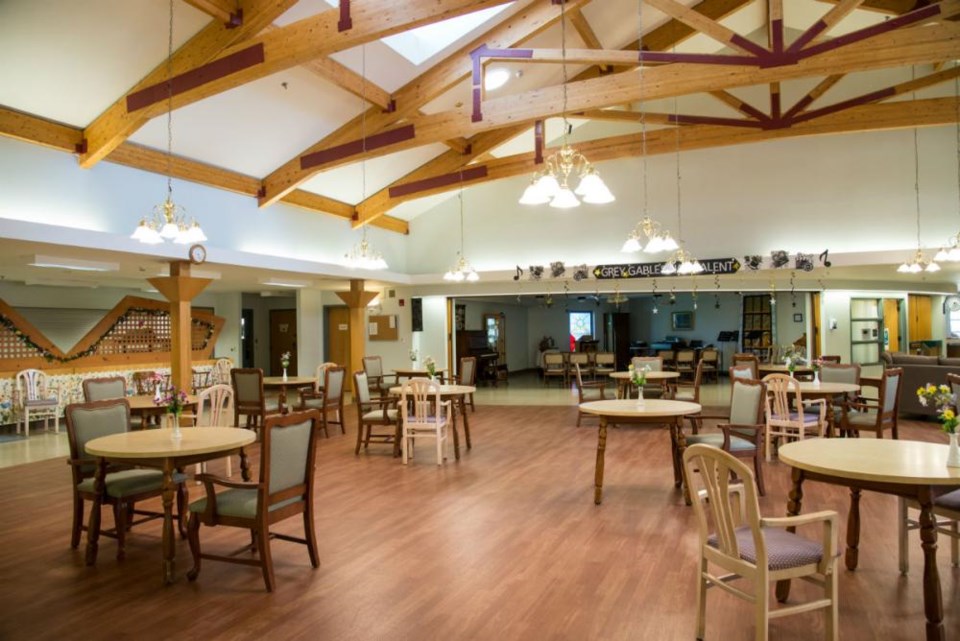 Grey Gables, located in Markdale in the Municipality of Grey Highlands, has been approved by the province for redevelopment, which will include a 62-bed expansion and transition to a 'campus of care' service model. Pictured is the current auditorium facility at Grey Gables. Contributed photo.

In an effort to help guide the redevelopment of two long-term care (LTC) facilities in the region, Grey County council has established a dedicated task force.

“Grey County has received support from the province to proceed with the redevelopment of 128-bed facilities at both Rockwood Terrace in Durham and Grey Gables in Markdale,” said Kim Wingrove, CEO of Grey County at a committee of the whole meeting held last week.

In the Town of Durham, the county has acquired a 32-acre parcel of land for the expansion of Rockwood Terrace. SHS consulting has also been retained for the project to prepare a business case that will explore the demand for senior’s housing in the area and redevelopment design options.

A consultant report is expected to be received in the spring, at which point county council will proceed with acquiring design drawings.

Once a design drawings have been approved by the province, a Request for Proposals (RFP) will be released for the construction of the project. The project currently has a projected completion date of 2025.

“The timeframe is very tight and we want to see these things move forward. This will require quite a bit of commitment of time and effort to make sure that the project stays on schedule,” said the Town of the Blue Mountains Mayor Alar Soever.

As for Grey Gables, an RFP closed on Friday that will be seeking a consultant company to prepare an assessment report of how the current facility can be re-purposed.

When approving the Grey Gables redevelopment project, the Ministry of LTC noted that the newly expanded facility would become a campus of care – a LTC facility that offers varying levels of care on one site.

“This could include LTC, assisted living (retirement home), seniors apartments, and other services. There is not one single definition of a campus of care. A campus reflects the needs of the community and is designed to support an individual throughout the aging journey,” Jennifer Cornell, director of LTC for Grey County explained in a previous interview.

Wingrove says the county will be looking at how it can encompass this campus of care before exploring any design options.

“Additional or changed uses that would come at a later phase in the development need to be considered at this time so that we can lay out the sites appropriately, or, in the case of Grey Gables, best understand how a new building would connect with and leverage the current facility that already exists on that site,” Wingrove said.

Once the future use of the facility has been determined, county staff will contract consultants to create design drawings, which will need to be approved by the province. With approval, an RFP for construction will be released.

“I think there's going to be a huge commitment there from these representatives and I think this is a good solution. It brings together quite a wealth of information and knowledge. I think it's a very positive thing,” added McQueen.