The municipality is discussing implementing a bylaw that would limit downtown on-street parking to two hours
May 12, 2021 10:15 AM By: Jennifer Golletz 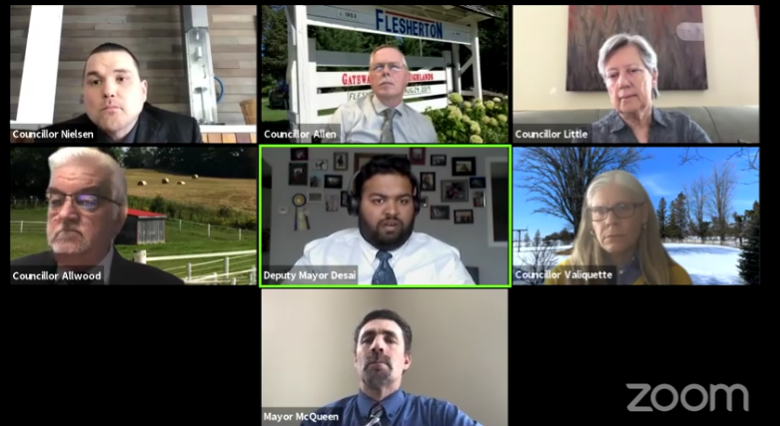 Council members referred the motion around a parking bylaw to an upcoming committee of the whole meeting. Jennifer Golletz/ CollingwoodToday

Mounting parking blunders in the municipality of Grey Highlands has council members considering a bylaw that would see parking in its downtown cores restricted to two hours.

“Sometimes just having that bylaw is enough to deter people from abusing the parking,” said Grey Highlands councillor, Paul Allen.

At a recently held council meeting, Grey Highlands deputy mayor Aakash Desai presented a notice of motion that proposed drafting a new bylaw that would see a two-hour parking limit implemented in the municipality’s downtown areas.

The motion comes following several reports of parking problems in the downtown areas of Markdale, Kimberley and Flesherton, where residents say vehicles are parking for several hours at a time along the main streets.

“I find groups of cyclists often park all along the road and then go out for the day cycling. Those cars can be parked there for several hours,” said Kimberley resident, Stacie Howe.

The congested parking areas have been further complicated as many local businesses have adjusted their business models to offer curbside pick up – causing frustration around the availability of parking and the ease of getting in and out of businesses.

She said a parking bylaw would be a step in the right direction to getting area parking blunders under control, but added that more signs to direct people to other parking options would also help.

“We do have a municipal parking lot in town, but it's not really well signed,” she said. “There's no green parking sign there.”

She said the parking lot is not easy to see from the main street and unless you know it is there, you likely wouldn’t find it.

“I think if we're going to restrict parking on our downtown streets, then we need to provide off-street parking. If you're unable to park on the street in front of a store you wish to go into, there are many other parking spaces available. The problem is, right now, there is no signage for this parking,” Allwood continued.

According to Howe, the municipal parking lot in Kimberley has eight free parking spaces that have the potential to help alleviate the strain on the main street and increase pedestrian safety.

“All it says is ‘no overnight parking or you'll be towed.’ It does not say – please come park here,” she continued, adding that she is hopeful the municipality will implement some short-term solutions, such as better signs, ahead of the busy summer season.

According to the Grey Highlands clerk, this is not the first time council has discussed implementing control measures around parking in the downtown areas. A similar motion was brought forward in 2019, but funding was denied by council.

“So it was deemed complete as staff tried to meet the needs of that notice of motion and council turned it down as part of the budget deliberation,” said Raylene Martell, director of council and legislative services/clerk for Grey Highlands.

Following a brief discussion, council referred the motion to an upcoming committee of the whole meeting to allow time to collect public input and to provide staff time to evaluate the current parking situation across the municipality.

The next Grey Highlands committee of the whole meeting is scheduled for May 26.