'We used to play road hockey and the only time you had to move for traffic was at the beginning or end of the day because the parking lot for the Shipyards was at the end of the road,' recalls Paul Hurst, a Minnesota Street resident since 1946
Nov 27, 2020 12:00 PM By: Maddie Johnson 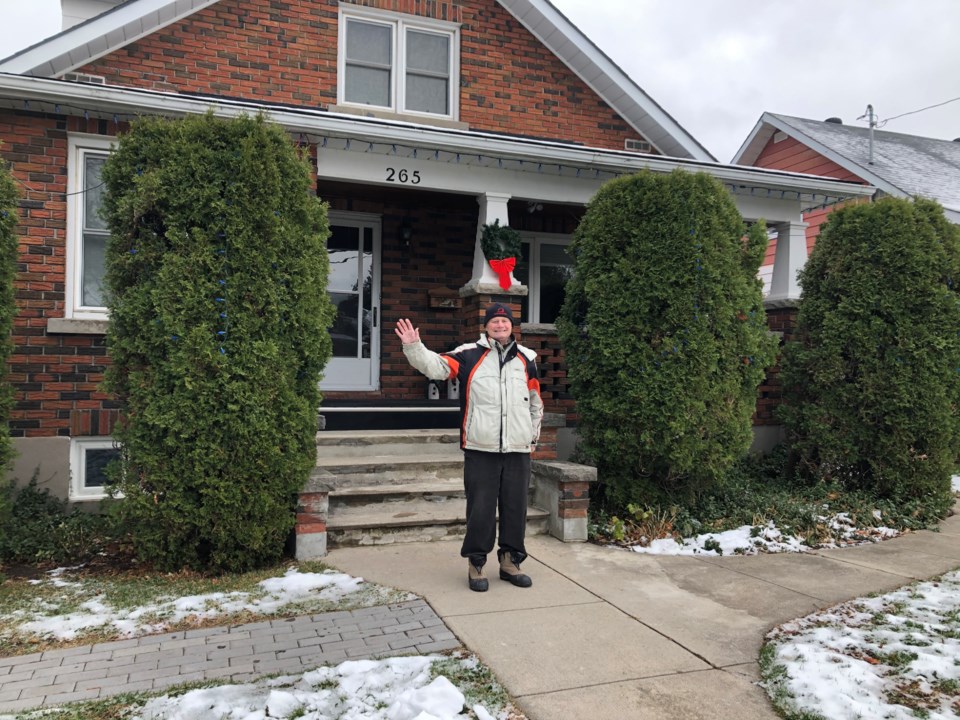 Paul Hurst has lived on Minnesota St in Collingwood for 74 years. Maddie Johnson for CollingwoodToday

Paul Hurst’s eyes light up as he strolls down Minnesota Street, pointing out notable houses and listing off the names of everyone who’s lived there over the years.

Hurst has lived on Minnesota St since 1946, just two years after he was born. His parents owned a house on Market St, but his mom grew up on the corner of Minnesota and Ontario and was eager to get back on the historical street as soon as possible.

Hurst and his sister grew up in a beautiful brick house almost exactly halfway down the block. Shortly after getting married, Hurst and his wife bought the house next door. He’s lived there ever since.

“It never crossed my mind to move anywhere else,” Hurst said.

The stretch of the street between Hume and Ontario has a whole lot of history.

Throughout the 1950s, 60s and early 70s, the block was home to more than 30 children. Hurst said it was a quiet street in terms of traffic, but there was always something going on or someone to play with.

“We used to play road hockey and the only time you had to move for traffic was at the beginning or end of the day because the parking lot for the Shipyards was at the end of the road,” laughed Hurst.

If they weren’t playing road hockey, they were playing baseball or football in one of the empty lots or skating on Hurst’s backyard rink in the winter.

The street was known in town as the doctor street because at the time, five doctors and their families resided on the small block. The majority of the historical houses along the street have been well preserved or restored, each of them with their own unique style and story.

“A lot of money has been put into it, the homes have been fixed up beautifully. But there is a lot more traffic now,” said Hurst. “It’s been weird watching town grow around this little street. It’s funny now, we’ve gotten to know a lot of people over the years.”

Norah McLean grew up in the house next door to Hurst.

She was younger than Hurst and his sister, but she remembers how their dad would always be outside, tinkering with steam engines.

“He was very cool,” said McLean. “All the boys in the neighbourhood would come and watch him.”

McLean had seven siblings, and can talk for hours reminiscing on what it was like to grow up on the doctor street. She remembers playing kick the can and hide and seek in every house and having go-kart races down the street. Skating on the rink in the winter and making a makeshift pool in the summertime.

“If there was ever a game we wanted that we didn’t have, we would just get Bardie to ask her dad to buy it for us,” McLean laughed.

Her neighbour, Barbara “Bardie” Bassett also had a chest full of costumes. A seamstress up the street, Dorothy Brock, would teach all the children how to sew.

“The older crew would put on these theatrical performances together and they were really quite good. But us young kids had to give up our allowance to see these productions,” she continued.

McLean also remembers the beautiful friendships that were created… and of course the love affairs.

“If you look at the web… It’s rather beautiful,” said McLean. “We were brought up by a whole neighbourhood.”

McLean said she remembers just wandering from house to house. Someone’s mother would feed them, and there was always something to do, someone to play with, or something to learn.

“If you didn’t get attention from one house you would just go down to the next,” she laughed. “It really was a neighbourhood that brought us up. And it was a total open book. I could go to any door and they would know my name. They never would forget you either. I could walk in now and they would know who I am. It was beautiful.”

All seven of McLean’s siblings have long since moved away from Collingwood — much like most of the children they grew up with — but she said many of them are starting to move back to the area.

“A lot of us now are getting back in touch with each other. Between all of us kids, everyone stayed connected with someone in some way,” she said.

Cheryl Wilson, who grew up right beside McLean, said it’s the people she remembers most.

“You could go outside and find something to do. You always had people to play with,” Wilson laughed.

And she said it wasn’t just the other children on the block but the seniors — and animals — too.

“You knew everybody. You could just walk in their house and say 'hi.' You’d just play cards or whatever it was. Aunt Dorothy taught me to sew,” said Wilson. “Even the pets, you would just see them walking and you knew who they were.”

Wilson recently moved back to the area as well.

“I always knew I would want to come back here,” she said. “It’s home.”

“There is so much history. Right down to the builders to the little things that happened in each house. It is home. You understood the true meaning of a neighbourhood,” added McLean.