From Halloweentown to Christmas Village –  the creative juices are always flowing for the creative collectors of the Georgian Bay Villagers Club, part of US-Canada network of miniature village makers
Oct 30, 2020 7:00 PM By: Maddie Johnson 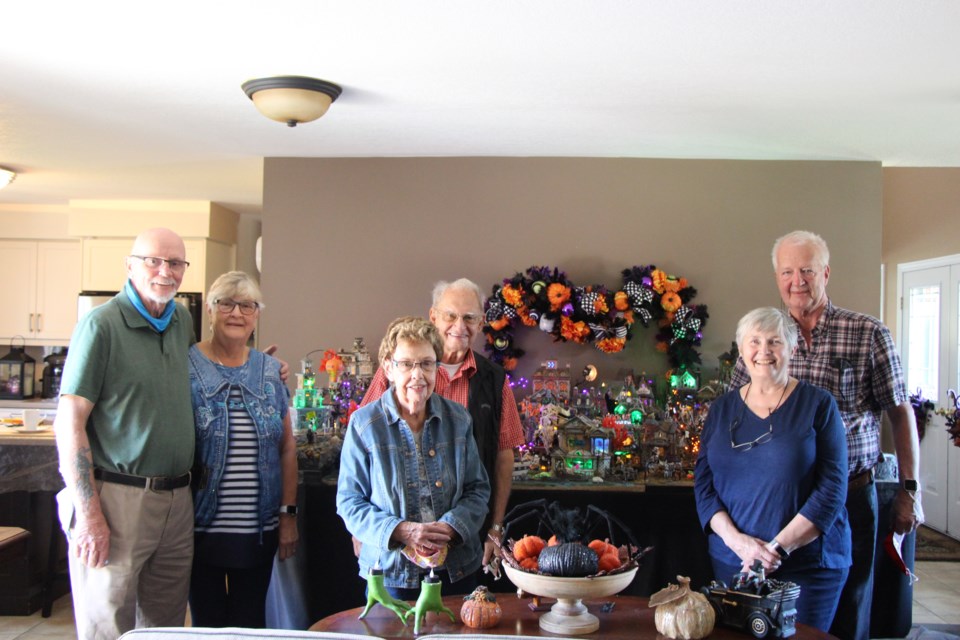 Founding members of the Georgian Bay Villagers Club Norm and Hillary, Lynda and Jim and Martha and Jack stand in front of one of their many intricate and exciting Halloween-themed displays. Maddie Johnson for CollingwoodToday

Halloween hasn’t even happened yet, but if you’ve already started dreaming of the holiday season, you’re not alone.

While their festive fall arrangement will remain on display at town hall for one more week, the Georgian Bay Villagers have already started concocting their Christmas creations, and the members of the club couldn’t be more excited.

“I’m ready to take the fall display down because I’m anxious to move on to Christmas. I have a lot of ideas for Christmas that I want to get started on,” laughed Martha Jack, a founding member of the Georgian Bay Villagers Club and the current secretary for the National Council of 56 Clubs (NCC).

The club is the local branch of the NCC, which is an umbrella organization for Department 56 Collectors Clubs throughout the United States and Canada.

If you’ve ever spent hours awestruck by those intricate village dreamscapes you see in shop windows and on shelves typically around the holidays — these clubs are for the people who piece them together. The majority of the pieces are designed by a company called Department 56, which is a U.S. manufacturer of holiday collectables known for its Christmas village collections, but they have pieces for all seasons.

“It’s a bit of an addiction,” said Martha.

Martha and her husband, Barry Jack, along with friends Hillary and Norm Redpath and Lynda and Jim Haywood, founded the Georgian Bay Villagers Club two years ago as a way to bring their village-making passion to the South Georgian Bay area. All six members were previously a part of the Trillium Village Collectors Club in Toronto.

“We’re all getting older, and after we moved up here we realized it was going to get pretty hard getting down to Toronto all the time,” said Martha. “We started talking about creating our own club up here because we all really enjoy creating these sorts of things. Eventually, we decided we would just go ahead and see if we could get other members in the area.”

The club is still fairly small, with about eight to 12 active members, but many more have joined on the Facebook page and through the club’s new Zoom sessions.

“It’s building,” said Martha. “There are a lot of visual participants. Exchanges of ideas.”

The Georgian Bay Villagers meet with affiliate clubs every six weeks over Zoom, where members exchange ideas and have educational presentations with something new to try. Prior to COVID-19, the club would travel to the U.S. to attend conferences with other collectors as well.

“We are getting more and more Canadian content now,” said Hillary.

“And we’ve met people from really all over the world,” added Martha. “We would never in a million years have some of these connections. It’s really a wonderful sign.”

Out of the original six, Barry and Martha have been collecting for the longest. Their basement now houses between 300-400 pieces designed for almost any holiday, season, and occasion.

The couple became hooked on the hobby after a trip to Niagara-on-the-Lake in 1990, the year they got married. They found a Christmas store that was selling off all its Department 56 pieces, and they “fell in love with some of the houses.”

“We went back three times after work that week and got more houses,” laughed Martha. “Our basement is now filled with racks and racks of houses.”

And not only their basement. All over Barry and Martha’s house, smaller villages and little vignettes are on display, typically all centred around some sort of theme or season. And while Hillary, Norm, Lynda and Jim haven’t been collecting for quite as long, their homes have started to look pretty similar.

Norm, who is the current president of the Georgian Bay Villagers Club, bought Hillary her first house on a whim almost 15 years ago. She collected another four or so houses and proudly displayed them on top of her buffet for several years.

“I was so proud of them, until I met these guys,” Hillary laughed as she gestured to Martha and Jack. After they moved to Collingwood, Hillary and Norm started building bigger displays to showcase around their house as well.

“It’s not just a hobby, it’s a creative outlet,” Hillary added. “It was especially nice during COVID.”

Lynda and Jim’s first piece came from Costco about 10 years ago. Lynda’s passion lies is in creating big and beautiful backdrops to go along with the village scenes.

While the women in the group love the displays for bringing out their creativity, the men have assumed the role of engineers and electricians.

“There are certain things you can't buy for a village so we make our own,” said Norm. “Trees and treehouses, grapevines, fences, we build all of our own roads. It evolved from just being a collector of houses to really making some great, fantastic and artistic displays.”

“Amongst the six of us, everybody sort of has their special areas. You are not critical of one versus another, everybody does different things,” said Martha.

The club’s fall display, which features wineries, farmers collecting hay and children in costumes, is visible at Town Hall until Nov. 2. At the end of next month, they will fill the window once again with a holiday-themed scene.

Displays of that size typically take the club between two and three weeks to complete.

“Fall is all about being out in the country, the colours. We are really pleased with that one,” said Martha. “And it came together really quickly. One afternoon we had the whole thing done.”

The members have already started laying the groundwork for their holiday village. So far, they have plans to incorporate a Harry Potter village, a ski hill, and an area they will call the North Pole, which will be full of colours and lights.

“Families will come by, and we love watching the children peer through the window, so we try to do something for every generation,” said Martha.

The club was also going to display their first Easter-themed village this year, but they put it on hold due to the pandemic. They all really liked how that village came together, so they are hopeful they will be able to do it next year.

Despite the endless hours and intricate detail that goes into each display, after a few weeks, the members are almost excited to take them apart and start building new ones.

“There are only very small gaps between our displays,” said Hillary. “I get bored. I love my displays but after a while, I want a change. It’s part of decorating the house really.”

And they really do go all out when decorating their house.

Members even have vignettes for St. Paddy’s Day, Valentines Day, and even a Margaritaville one they build in the summertime.

“We learn a lot from each other,” said Lynda. “But it’s completely what you want to do with it as well.”

“A lot of my friends really appreciate our displays, saying they could never do it themselves. But they can, anybody can,” said Hillary. “I wasn’t creative before, I worked in a hospital for many years. I’m more of a left brain. But once I started doing the displays more and more and going to the conventions, I got better. It’s really exciting.”

To find out more or to become a member of the Georgian Bay Villagers Club, email Norm at gbvillagers@gmail.com or check out the Facebook page.