This vessel's four-month journey to Victoria proved too much for some crew who deserted before the voyage ended
Jul 21, 2019 1:00 PM By: Remember This? 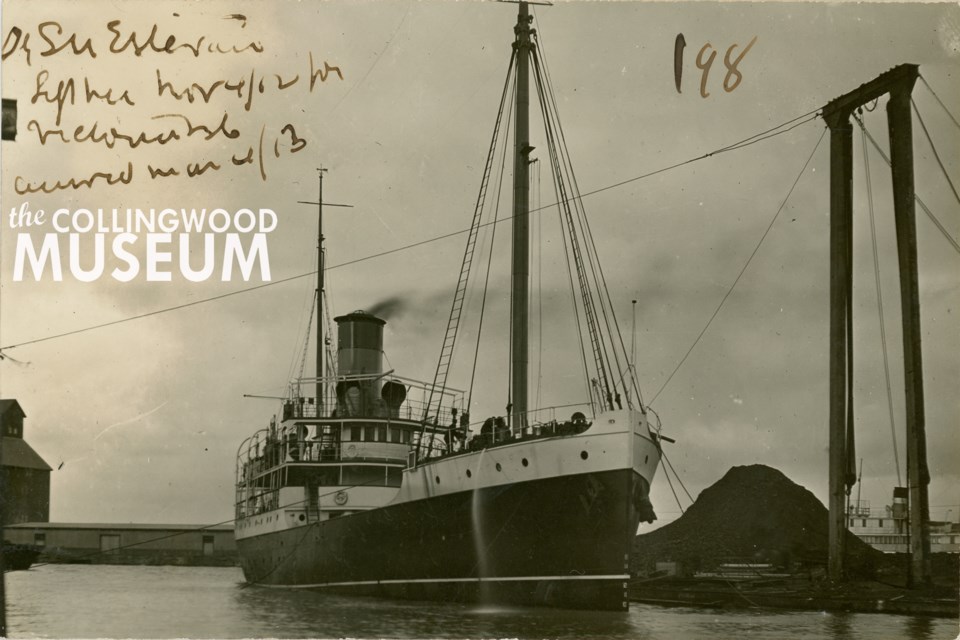 The lighthouse tender Estevan was constructed at the Collingwood Shipyards for the Canadian Department of Marine and Fisheries in 1912. This was the first vessel to be commissioned in Collingwood by the federal government.

Today’s featured photograph was taken prior to the ship’s departure for the West Coast. The Huron Institute records that the vessel left Collingwood on November 4, 1912, arriving in Victoria, B.C. on March 4, 1913. The same is written in black ink on the photograph’s top left corner.

The onerous voyage took four months to complete and appears to have been too much for some of the crew. According to Skip Gillham’s The Ships of Collingwood, “eight crewmen deserted en route and two more were fired.”

The impressive journey took the vessel through the Strait of Magellan, crossing from the Atlantic to the Pacific through the tip of South America. Curiously, Vancouver’s Wallace Shipyard (later renamed the Burrand Dry Dock) had been in operation for six years at the time of the Estevan’s launch.

The estimated journey of 27,358 kilometres (or 17,000 miles) makes one wonder why the ship wasn’t constructed on the West Coast. Is it possible that the Collingwood Shipyards’ pricing made the difference?

When looking at today’s photograph more closely, two of Collingwood’s early wooden waterfront buildings are visible in the background. Collingwood’s second wooden grain terminal appears at the photograph’s left side, and the northern portion of the single-storey freight shed appears between the vessel and terminal structure.

The vertical structure on the photograph’s right side has staff baffled, as do the various lines extending from the structure’s apex in various directions. The most striking line takes a diagonal path all the way to the photograph’s left side.

If you know the history behind this mysterious structure, please contact museum staff at mshaw@collingwood.ca.