Riverside Russell House might have been seasonal hotel or boarding house.
Oct 7, 2018 9:00 AM By: Remember This? 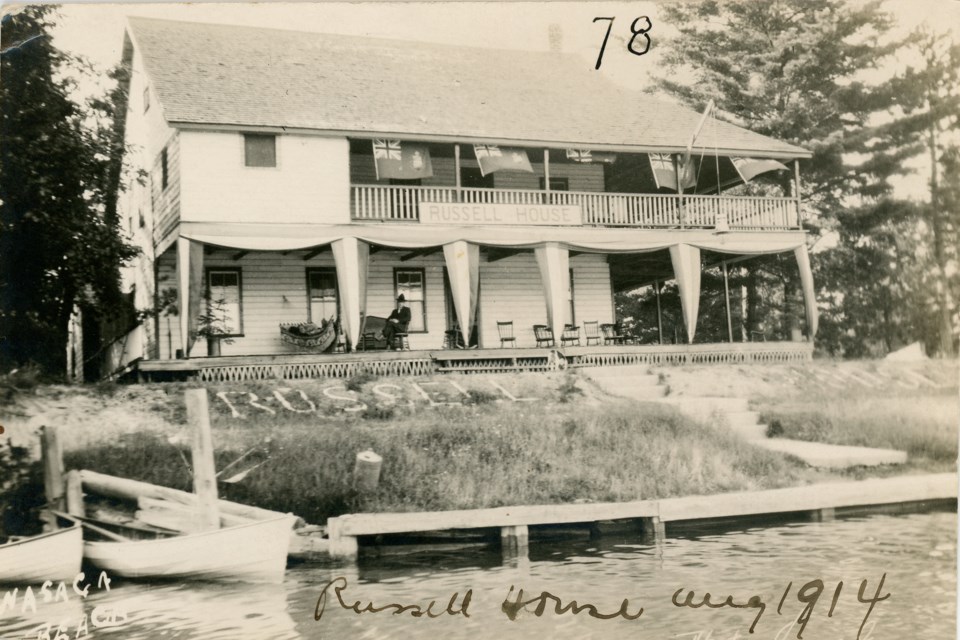 The Collingwood Museum houses numerous photographs of neighbouring communities in its permanent collection due to the collecting efforts of the Huron Institute.

In the absence of other collecting organizations within the county and region, the Huron Institute collected for the localities of Craigleith, Thornbury, Meaford, Nottawa, Batteaux, Creemore, and Wasaga Beach to name a few. The collecting began in 1904.

This black-and-white photograph printed on a postcard backing shows Russell House, a two-storey frame structure situated along Wasaga Beach’s Nottawasaga River in August 1914. The photograph appears to have been developed at Collingwood’s Jury and Gregory Drug Store on Hurontario Street. Two unidentified individuals are situated on the veranda, one being a well-dressed man sitting in a wooden chair and the other being a woman casually observing the photographer from a hammock.

Five flags hang from the roof line above the second-storey balcony. The reason for their display is unknown; however, museum staff wonders if this may be due to Canada’s entry into the First World War on 4 August 1914. The flag displayed is the Canadian Red Ensign which was in use between 1868 and 1921. A bell is suspended from a wooden support on the second-storey balcony between the fourth and fifth flags.

The name Russell House appears in two locations: firstly, on what appears to be a wooden sign mounted along the second-storey balcony banisters, and secondly along the property directly in front of the structure on either side of the front steps. Little is known about this building or its operation, but quite possibly it was a seasonal hotel or boarding house that attracted neighbouring residents and visitors alike.

If you can add to the history of Russell House, please contact Collingwood Museum staff.