Next time you're on the water, have a look for this ship

In this week's Remember This, find out about the Iocolite, which is possibly the oldest Collingwood-built ship in existence today.
0
Dec 23, 2018 10:00 AM By: Remember This? 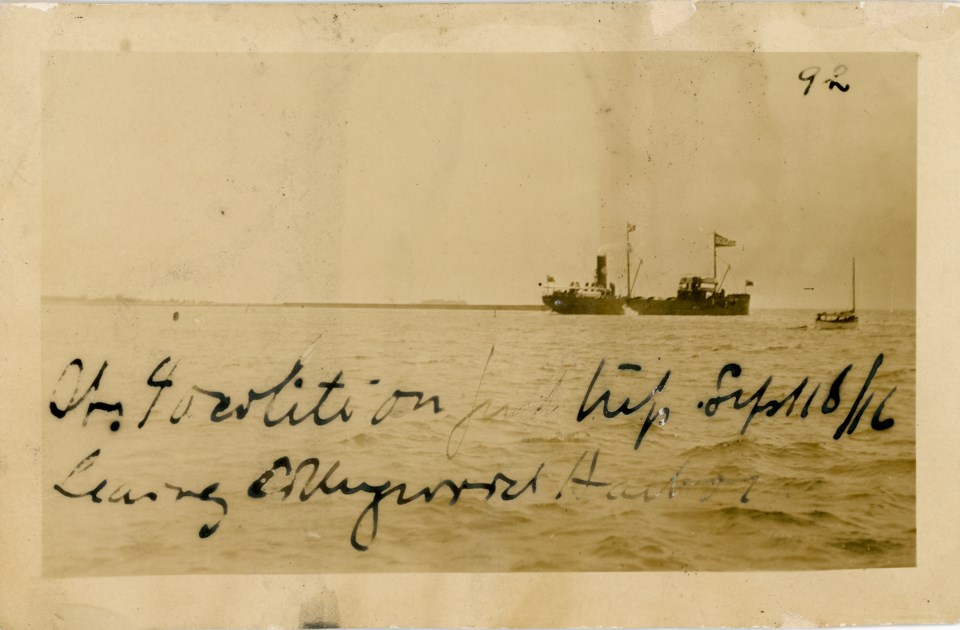 The Iocolite is possibly the oldest Collingwood-built ship in existence today.

The two-masted tanker Iocolite was constructed at the Collingwood Shipyards as Hull 46 for Imperial Oil, and it launched April 29, 1916.

This week’s Remember This featured photograph from the Collingwood Museum Huron Institute collection shows Iocolite leaving Collingwood Harbour on its first trip on Sept. 18, 1916. A much smaller wooden vessel appears off its starboard (or right) side and is pulling a dory. No information has been recorded about this latter boat, but it does resemble the wooden pleasure boats built in Collingwood by the Watts, Morrill, and Doherty families. The Nottawasaga Lighthouse and surrounding treed-island are just visible in the centre of the photograph.

Iocolite spent the remainder of 1916 travelling the Great Lakes before beginning coastal trading. St. John’s, Newfoundland, is believed to have been one of Iocolite’s first ports of call. Her docking in 1917 was also a first for the community of St. John’s, marking the arrival of the first bulk oil carrier.

For forty years, Iocolite serviced the East Coast of North America, travelling as far south as Mexico. She continued to frequent the Great Lakes, and during the Second World War hauled much-needed aviation fuel to Goose Bay, Labrador.

Iocolite was renamed Imperial Kingston by Imperial Oil; however, the date of this change is debated by marine enthusiasts. In 1950, the vessel’s gross tonnage was increased, but this improvement did not prevent its sale in 1958 to Marine Salvage for scrap.

In 1961, Imperial Kingston was saved from scrapping by A.B. Mclean and Son and was promptly reduced in size and converted to a sand and gravel barge at Sault Ste. Marie. Its name was changed for the third and final time to Charles W. Johnson.

The present-day status of the Charles W. Johnson is largely unknown. An online search reveals a familiar photograph of an aged, rusting hull (second photograph). Details about its continued service are unknown; however, Skip Gillham’s Ships of Collingwood records that she was still in service in 2001.

Do you know if the Charles W. Johnson is still in operation? If so, please contact Collingwood Museum staff.

This stone wall is nearly as old as Collingwood, and you've probably walked past it
Dec 2, 2018 9:00 AM
Comments
We welcome your feedback and encourage you to share your thoughts on this story. We ask that you be respectful of others and their points of view, refrain from personal attacks and stay on topic. To learn about our commenting policies and how we moderate, please read our Community Guidelines.