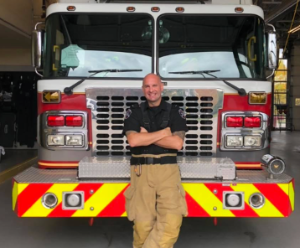 Age 44 years of Collingwood, ON, passed away on November 18, 2018. Mike was born in Halifax, NS, on April 29, 1974. Survived by his parents, James Scott (Lynne Forrest) and Dianne Scott, wife, Abbey (nee Spies), son, Ryder, and brother, Jeff (Samantha). Mike was a proud Firefighter with the Central York Fire Services in Aurora and Newmarket out of Station 4-3.  Previously, Mike was a Firefighter with Blue Mountains Fire Department for seven years.  Mike will be remembered for his love of the outdoors; often found on his SUP, bicycle, or hitting the slopes. He was incredibly proud to be a Firefighter and loved every aspect of his job.  He found great comfort in the brotherhood of Firefighters and considered them family. Mike was most proud of his son Ryder, an accomplished skier, who exemplifies all the best parts of Mike. Mike was an inspiration to countless people for his miraculous recovery from a terrible motorcycle accident in 2016.  His strength, courage, and drive to recover defied all odds.  He will continue to inspire us all and his story will live on.  He was a loving husband, a dedicated father, and a true friend to so many people. He will be greatly missed.  A special thank you to everyone who helped Mike along his road to recovery but in the end succumb to Mental Illness.  A visitation will be held at 12:00 p.m. with a Memorial Service at 1 p.m. Friday, November 23rd, at the Craigleith Ski Club, Town of The Blue Mountains. In lieu of flowers, a Go Fund Me page will be set up for Frontline Forward.